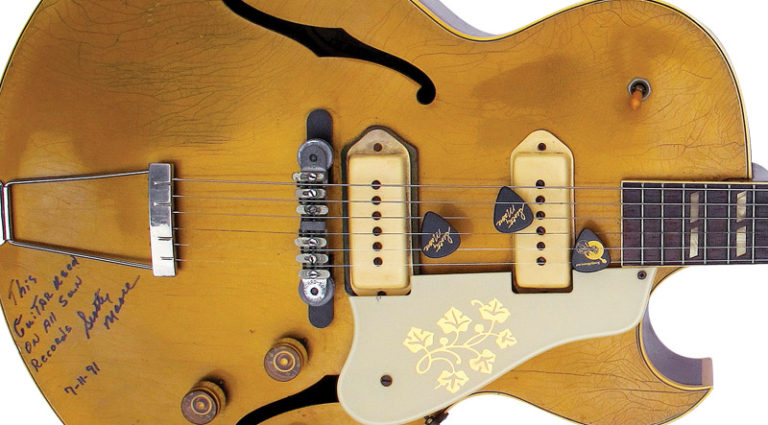 Like a hound dog hit by lightning, the first notes of rock and roll blasted out of radios across the country in July of 1954, courtesy of Elvis Presley’s supercharged-hillbilly singing on “That’s All Right” and “Blue Moon Of Kentucky,” backed by Scotty Moore’s guitar.

It was the twang heard ’round the world.

That guitar – or at least the sound it made – on Presley’s first four Sun singles, make it one of the most famous guitars in rock and roll, except for one thing; very few fans knew what it was.

Though Gibson never planned it, Moore’s Gibson ES-295 (serial number A-12290) became the first rock and roll guitar, its fancy gold finish as outrageous as the music it suddenly represented. In retrospect, it was the perfect choice in an era when men wore gray-flannel suits, Betty Crocker was the homemaker’s heroine, and tail fins on cars were merely a gleam in some designer’s eyes.

Moore believes that his choice of the ES-295 was essential to the sound of Elvis’ early rock and roll.

“All I did with my guitar was try to enhance what Elvis was doing,” he said. “There were just three of us in the band, with Bill Black keeping time on his bass, and when Elvis wasn’t singing, I was all there was.

“To me, that hollowbody ES-295 enhanced Elvis’ voice better than anything else I could have used.”

At the time, Gibson’s guitars were for big-band jazz, Fender’s for country and western, and pedal steels were hot sellers. Then, along came this audacious archtop at a time when guitars were only supposed to be au naturel or painted with a funky “sunburst.” Whoever played a gold-colored guitar was just asking for trouble!

As with many things in the guitar universe, it was Les Paul who sparked the development of the ES-295. In 1951, he asked Gibson to spray one of its ES-175 models in gold lacquer for an ailing World War II veteran who was a fellow fretter. Les told VG the tale several years ago.

“Mary Ford and I were playing at Wood Hospital, in Milwaukee, for injured war veterans. We would carry our guitars and amps from room to room. I was playing my Epiphone ‘Clunker,’ and Mary sang.

“One vet, Dean Davis, had his head all bandaged up from a brain-tumor operation, and he was propped up so he could see us. He said, ‘I am a guitar player, but I’ll never play again because I am paralyzed down one side of my body.’

“I said, ‘It is possible to play with one hand,’ and told him of my car accident and how I had my arm cast in plaster so I could still play.

“I asked him what song he wanted to hear and he picked a difficult one in the key of F# – ‘Just One More Chance.’ I turned my amp way up and I tapped out the chords with just one hand on the fretboard. Tears rolled down his face.

“I told him that I would have a guitar made for him – any kind he liked. He said he would like a golden archtop.

“In the hallway, the doctor told me that his case was terminal and he probably wouldn’t last one week. I called Ted McCarty at Gibson immediately and said I needed a guitar right now – take an ES-175 and paint it gold. He said he would make it and ship it directly to the hospital. There was no publicity intended; it was just a gift.

“Well, the guitar [serial number A-9196, registered in Gibson’s logs on December 4, 1951] arrived, but the vet never saw it. He died shortly after we visited him. His wife received the guitar and sent it back to me with a letter explaining the vet’s passing.”

Nothing more came of that one-off golden guitar. Spraying a perfectly good 175 in gold paint was either sacrilegious or just downright silly, depending on your point of view. Les Paul, though, didn’t see it that way, and indeed had an appreciation for things most people couldn’t comprehend.

Inspiration for production of the ES-295 came once again from Paul’s helping hand.

Throughout the late 1940s and early ’50s, he hounded Gibson to produce a solidbody electric guitar based on his own homebuilt “Log” – “the broomstick with the pickups on it,” as he remembers CMI-Gibson president Maurice H. Berlin calling it. When Gibson finally changed its corporate mind and hustled to catch up with that upstart Leo Fender, Paul remembers Berlin telling him that they would put his name on the solidbody and build it to his specifications.

“M.H. asked me what I wanted, and I just spurted out ‘gold’ as if I’d been rehearsing it. Well, if I’d had a bomb and thrown it, it couldn’t have been any worse.

“The shop foreman stood up and said, ‘That’s the most godawful color you could pick!’

The 295 was an ES-175 with the radical new technological features of the Les Paul Model along with the 16″ laminated maple archtop body of the ES-175 (along with the 19-fret neck with double parallelogram inlays and the Florentine cutaway). Beyond that, though, the similarities ended. Whereas the 175 was only available in 1952 with a single P-90 pickup, the 295 had two, covered in ivory-colored Royalite to harmonize with the gold lacquer body and gold-colored parts.

Like the Les Paul Model, the 295 used the combination bridge-tailpiece, a long-reach tail with the bar bridge attached at its end. Paul had created the tailpiece in search of added sustain, but a design snafu on the solidbody routed the strings underneath the bridge and any advantages of the new bridge were dampened. On the 295, however, the strings went over the top and added the kind of hollow-body sustain Chet Atkins would later strive for with his aluminum bridge and nut on the Gretsch 6120.

Paul remembered those early guitars with fondness. “Gold was a pretty outrageous color in 1951. It didn’t make you play any better – it just made you look better.”

It was that look that hooked Scotty Moore. As he recounted the story for VG. “When I was in the Navy during the Korean War, my buddies and I bought Japanese Fender knock-off guitars that were so bad the frets wore out in three months. I swear, those frets were made out of old beer cans! I came out of the Navy in January of ’52 and said ‘I’m going to buy me a good guitar.’”

Moore bought a ’52 Fender Esquire and a Champ amp, but never truly cottoned to it. “Maybe I was hiding behind my guitar, but onstage, that little Fender just did not seem like much to hold onto,” he said. He further addressed the Fender in his 2014 autobiography, Scotty & Elvis Aboard the Mystery Train. “The streamlined Fender just didn’t feel right when I played it,” he wrote. “It probably had something to do with its shape. The Gibson was more feminine. I could make out with the Gibson. I couldn’t get it on with a Fender.”

When Moore saw that Gibson in ’53, it was love at first sight.

“I was walking down the street in Memphis by the O.K. Houck Piano Company, and I saw a guy in the window putting out a new guitar. It was this Gibson, all gold and shiny. It was the only gold guitar I’d ever seen. I said, ‘Wow, that’s the prettiest thing I’ve ever seen.’ I absolutely had to have it, so I traded my Esquire and bought it then and there. It was probably only on display in the store window for 10 minutes.”

But, like many guitar players, he had to make some changes to his new instrument. Les Paul’s special bridge didn’t work well for him, so he found a Melita Synchro-Sonic with adjustable saddles that allowed him to intonate each string. This necessitated adding a different trapeze tailpiece; he chose a Kluson, as used on Gibson’s ES-125.

Moore bought the guitar while he was working days at University Park Dry Cleaners and playing in the Starlite Wranglers band at night. Elvis was still at Memphis’ Humes High School. When they played their fateful studio jam session a year later at Sun, for Sam Phillips, Moore was picking that 295.

“I dearly love the hollowbody sound,” Moore said. “To me, that’s the sound of jazz – and rock and roll. Of course, [Elvis’ other most-prominent guitar player] James Burton’s never played anything but his damn old Tele, and he’d never consider a hollowbody. We each had totally different view on what makes the rock-and-roll sound. It’s strictly a matter of taste and opinion, and there’s nobody that can say which is right or wrong.

On July 7, 1955, four days before their next recording session and with some extra cash in his pocket, Moore returned to O.K. Houck, where he traded the 295 for a Gibson L5-CESN (serial number A-18195). He used that guitar – along with the new EchoSonic amp he bought in May of ’55 – to record the band’s last Sun Single, #223 “Mystery Train”/“I Forgot To Remember To Forget.”

In his autobiography, Moore called the 295 a “wider-bodied instrument that had a more impressive appearance” than his Esquire. The L-5 and Super 400 were even more impressive, which was fitting, as the songs kept getting bigger, too.

But what happened to the ES-295 bearing serial number A-12290, which first made the music?

When Moore traded the golden guitar, it became just another used instrument for sale at Houck. It bounced around Memphis for years, being used and played. Eventually, Memphis singer (and friend of Elvis) Jimmy Velvet bought it for his memorabilia museum. Today, it’s part of a collection belonging to Larry Moss and his wife, Judy. Moss is a devoted Elvis fan and recognizes the importance of the 295, calling it the “holy grail” of rock and roll guitars. Naturally, he wanted to get it back into Scotty’s hands. So, in 2007, Moss reunited the gloriously patinated guitar with Moore on George Klein’s TV show, “Memphis Sound.”