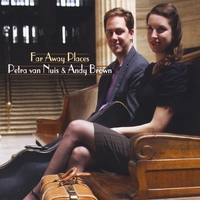 There’s not a lot of precedent for albums featuring nothing but a female voice and a jazz guitar, but those that come to mind set a high bar. There was Al Viola with Julie London, Joe Pass with Ella Fitzgerald, and more recently, Martin Taylor with Alison Burns. Fast company, to say the least.

Brown and van Nuis met at the Cincinnati School for the Creative and Performing Arts. It was there that Brown, initially a blues buff, apprenticed under jazz guitarists Cal Collins and Denny Poole. He later studied with the legendary Ted Greene. Not surprisingly, van Nuis, possessor of a soft, “little girl” voice, was influenced by pianist/singer Blossom Dearie. Like Dearie, she has a respect for melody over gymnastics (refreshing these days), citing Chet Baker and Peggy Lee as two more beacons.

Her light, thin voice is counterbalanced by the dark, thick tone Brown gets from his single-pickup ’57 Gibson ES-175, which he plays through a ’66 Fender Vibrolux. When called on, he provides comping chords and walking bass simultaneously (check out their uptempo arrangement of Cole Porter’s “From This Moment On”) or surging rhythm (as on Duke Ellington’s “Caravan”). On the ballad “Far Away Places,” Brown keeps his solo simple – as in simply beautiful – and he goes it alone on a compact rendition of “Bim Bom,” strutting his stuff over Jobim’s spirited bossa nova standard.

The choice of material is especially rewarding. There are a few well-worn standards, like those mentioned above, but overdue attention is paid to such gems as the title tune (a hit for Bing Crosby), “Destination Moon” (associated with Nat Cole), and Rodgers & Hart’s oft-overlooked “With A Song In My Heart.” So who needs a band? Certainly not Andy and Petra.