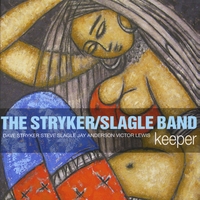 The Stryker/Slagle Band has been producing near-perfect quartet records for some time, and Keeper will not snap the string.

While Dave Stryker (on guitar) and Steve Slagle (sax) supply memorable melodies and soulful solos, the backbone of the band’s sound is provided by Jay Anderson (bass) and Victor Lewis (drums). Except for a take on Thelonius Monk’s “Ruby My Dear,” the two soloists composed the tunes and they’re all – as the title implies – keepers.

The title cut starts with a frenetic bluesy intro with nice changes and a repeating rhythm figure under Slagle’s sax. Stryker darts around the changes with considerable chops for a “jazz guitarist” who boasts as much feel as technical ability. Most cuts demonstrate the interplay between the soloists and the rhythm section.“Bailout” (a timely title given today’s political machinations) has an opening double line from Stryker and Slagle while the rhythm section cooks. Both serve up dazzling

solos, with Stryker’s octave-line out tipping the hat to old-school players like Wes Montgomery. The interplay makes full use of the feel they have for each other’s playing. “Convergence” is a bop tune, while the Stryker composition “Came To Believe” is a melodic swinger with imaginative soloing. “Gold Dust” features him on nylonstring acoustic, beautifully navigating the Latin feel. There’s more fine ballad work on “Bryce’s Peace,” with its fine chordal work under his partner’s solos.

Through the years, Stryker has put in a lot of time with Brother Jack McDuff, Stanley Turrentine, and Eliane Elias. But with this band (and Slagle), he has hit his stride as a player and composer, and now sits in the upper echelon of this generation’s jazz guitarists.

Various Artists – All My Loving

Downchild – I Need A Hat