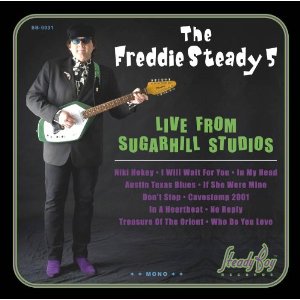 You might say Austin’s Freddie Krc wears a lot of hats. He has drummed with Jerry Jeff Walker, B.W. Stevenson, Carole King, and Ronnie Lane – not to mention anchoring that chair in the power-pop pioneering Explosives, who were Roky Erickson’s backup band for years. He also plays guitar and sings county in Freddie Steady’s Wild Country, folk-rock with the Shakin’ Apostles, and ’60s-style garage rock with the Freddie Steady 5. He’s also an in-demand producer and head of his own SteadyBoy label.

Band and studio came together when Krc was asked to participate in SugarHill’s live-in-the-studio series, which was so successful they came back for a second session – the results of which are presented here as they went down.

Other than well-chosen covers of P.J. Proby’s “Niki Hoeky,” Bo Diddley’s “Who Do You Love,” and the Beatles’ “No Reply,” the rest of the 17 songs were penned by Krc, often in tandem with Cam King, lead guitarist with the 5, the Explosives,

and other Freddie associations. Whether writing alone, with King, or with teen rocker Jenny Wolfe (the Farfisa-laden “I Will Wait For You”), Krc has a knack for paying homage to bands, periods, and styles without lapsing into caricature – his remake of the Explosives’ “A Girl Like You” being a perfect example.

Throughout, King is both an on-the-money parts player and snarling soloist, as on “Austin, Texas Blues” and the Doug Sahm-inspired “What’s So Hard About Love.”

Albert Castiglia – These Are The Days