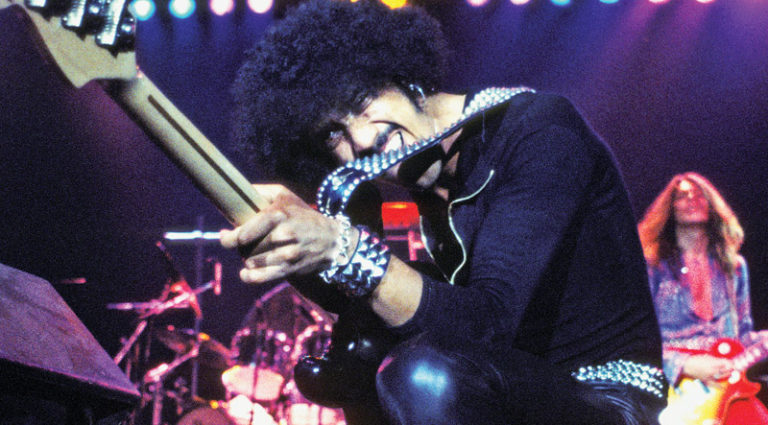 A rock-doc of Thin Lizzy’s fabled frontman, this film traces the singer/bassist’s life through interviews from bandmates, family, and friends. A half-black child in 1950s and ’60s Dublin, Lynott grew into a tough, force-of-nature rocker – yet never lost the Irish roots in his lyrics.

Along the way, Phil ran with Les Paul rippers like Gary Moore, Scott Gorham, Brian Robertson, Snowy White, and John Sykes, plus Strat ace Eric Bell. With deadpan humor, Gorham explains the origin of Thin Lizzy’s guitar harmonies, a studio gaffe that became their trademark. Nearly dropped by their label, Lizzy scored their 1976 breakthrough with “The Boys Are Back In Town,” a track the band didn’t care for at first. Today, Lynott protégé Huey Lewis calls it, “A bolt of lightning, one of the best rock songs of all time.”

The band’s glory years followed – though the guitar-blazing “Got To Give It Up” hinted at Lynott’s increasing drug use, slowly devouring Lizzy from within. Interviews confirm the downward spiral and how Phil’s death at 36 shocked the rock universe.

Songs For While I’m Away is a poignant film that doesn’t pull any punches. As anyone will tell you, there was only one Phil Lynott, and he was irreplaceable.