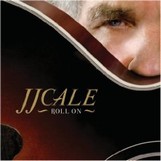 Sixteen. That’s how many albums J.J. Cale has released in 38 years, counting one live collection and his Grammy-winning collaboration with Eric Clapton, The Road To Escondido. Not exactly a fast clip, but, like his guitar playing, Cale is nothing if not laid-back, never in a hurry. He doesn’t play a lot of notes just for the sake of it, and apparently doesn’t record unless he’s got something to say.

Which is ironic, because he’s made a fortune as a songwriter – equally ironic in itself, because he’s such a fine, distinctive guitar stylist.

Any Cale release is cause for celebration, but with 2004’s To Tulsa And Back, he fleshed out the production more, abandoning his purposelyprimitive “demo” stance. He continues in that vein here, with one-manband studio constructions indistinguishable from full-band sessions with longtime cohorts like bassist Bill Raffensperger, drummer Jim Karstein, rhythm guitarist Christine Lakeland, and keyboardists Walt Richmond and Rocky Frisco. J.J. Cale Roll On Rounder

At 70, Cale hasn’t lost a step – immediately evidenced by the jazzy opener, “Who Knew.” He addresses aging with the oldtimey “Former Me” and “Bring Down The Curtain.” The latter is a perfect example of Cale’s studio mastery – on the surface, a simple ditty falling somewhere between “Lies” and “Sensitive Kind.” But closer examination reveals a lot going on here, from the lonesome acoustic over an insistent kick drum to myriad layers of guitar subtleties to almost subliminal (but just right) synth string and horn arrangements.

In typically sly Cale fashion, the title-track rocker, featuring his biggest fan, Eric Clapton, doesn’t come until 11 songs into the dozen-song program. He sings, “Ain’t nothing to it, just a little bit of rhythm and blues and rock and roll.” But if it were that simple, there wouldn’t be just one J.J. Cale.