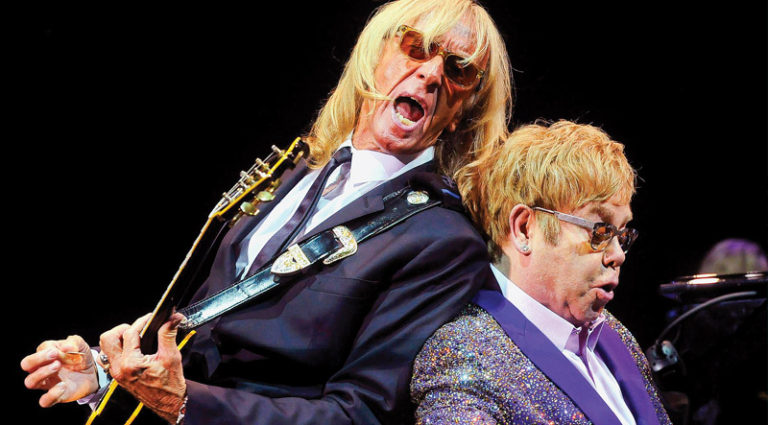 Countless millions are fans of Davey Johnstone’s work, even if they don’t know his name. Anyone who appreciates pop music from the past 50 years has heard his guitar, mandolin, or banjo on hits by Elton John and many others.

Johnstone has been an essential part of John’s band for most of the superstar’s career. In 2018, John began a Farewell Yellow Brick Road final tour, a world trek of three-hour concerts that enjoyed rave reviews until Covid-19 rattled the planet. With the unexpected time off, Johnstone started working on The Davey Johnstone Band’s Deeper Than My Roots, his first solo effort since 1973’s Smiling Face.

“There was no plan on doing this album at all, because we still have another year and a half to run on the farewell tour,” Johnstone said. “But we were stopped in our tracks, like everybody else.

“When it became apparent I was going to be home for a while, I started kicking around ideas and everything fell into place; I got together with my friend, Rick Otto, a poet and an actor here in L.A., and we started writing songs. Within a couple months, I had four or five where I felt, ‘Hey, we’ve got something going here.’ We continued to write, and I recorded at home and at a friend’s home studio.”

Johnstone with his three-pickup Les Paul Deluxe onstage in 1982 and ’86. “It’s a great guitar,” he said. “I actually chose it for Elton, at Manny’s in 1972. He said, ‘I want a guitar for my house.’ I saw it and said, ‘If you want something good, get that.’ Two months later, in the middle of a tour, one of our trucks was stolen; in it was the third Fender mandolin ever made, two Les Pauls – one gold top and a sunburst – and a ’68 Strat. They also got Dee Murray’s Precision and Jazz basses. It was horrible. We had a gig that night and Elton said, ‘I’ll have somebody bring the guitar you picked for me,’ and I’ve been using it ever since.” The theft deterred Johnstone from becoming attached to vintage instruments.

“I’ve always been the kind of artist who doesn’t record things for a specific market,” Johnstone said. “So is Elton, by the way. My sensibilities are for pop music, which for me encompasses the whole thing – folk, rock, jazz influences, whatever. This record was whatever came along, whatever felt good to me.

“There are inspirations I’ve always lent because of my love of the Beatles, Rolling Stones, Kinks, and bands like that. I’m very proud of that – that feel. To me, good music never gets old – especially good rock and pop. You never hear people saying, ‘We’re going to forget about the Beatles and the Rolling Stones and Pink Floyd,’ because they are classic aspects of rock music that have carried through.”

In addition to playing guitar on Deeper, he decided to play bass, incorporating what he learned from the late Elton bassists Dee Murray and Bob Birch, current bassist Matt Bissonette, and the melodic touches of McCartney’s playing in the Beatles.

The songs are new compositions and recordings, except for the two instrumentals, “Walt Dizney” and “Black Scotland,” which were recorded 10 years ago with Birch.

“These were the last two things he played on, and I wanted to honor his memory,” said Johnstone. “Both are very meaningful. When I heard ‘Walt Dizney,’ I went, ‘That sounds like David Gilmour and Pink Floyd!’ For ‘Black Scotland,’ the title came to me because of Little Richard. I worked with him many years ago. He was fascinated by the way I played. He said, ‘Man, where are you from?’ I told him I’m from Scotland. He said, ‘You must be from the Black part of Scotland,’ meaning I played pretty funky!”

Johnstone used a plethora of guitars including his trusty ’72 Les Paul Deluxe, a Gibson L-5, B.B. King Lucille, a ’69 Strat, and an Ernie Ball EVH. Acoustics included a Takamine, Gibson J-200, and a late-’60s Yamaha FG-140 he played on many of John’s ’70s classics.

Coming in the midst of John’s farewell tour was the critically acclaimed 2019 biopic, Rocketman. Johnstone was happy the film used John’s 1983 hit, “I Guess That’s Why They Call It the Blues,” which included a rare co-writing credit for him.

“We were kids doing what we loved doing,” he recalled. “We were having a scream in the studio, playing great music. Goodbye Yellow Brick Road clinched everything; it said, ‘These guys are at the top of the whole thing right now.’ We were getting calls from John Lennon, congratulating us. It was insane. It was our time.”

Their music was amazingly taut, though Johnstone flatly dismisses the perception it was all painstakingly crafted.

“The main thing was we weren’t belaboring the point. We were cutting really raw stuff, and people misunderstand that point because they think, ‘Elton John’s music is so perfect.’ But if you listen to it, it’s really basic, as far as recording. We have Gus to thank, and all the top-notch engineers who captured what we were doing early on. That’s why most of the songs were first, second, or maybe third takes. We knew we wanted to capture the excitement and vibe.

“People ask me, ‘How did you come up with that idea?’ Usually, your first idea is your best idea – your first bit of inspiration is the right one, you know? If you try and change it – ‘What about this?’ or ‘What about that?’ – that’s when you’re in the studio for an extra six months messing around until you disappear up your own ass. We were blessed with a great sense of telepathy amongst the band, great music, great lyrics, and a killer front guy. It was just a wonderful experience.”

The first time Johnstone worked with John was on 1971’s Madman Across the Water. Earlier that year, he’d worked other projects with Dudgeon and songwriter Bernie Taupin.
“I was first hired to play on the song ‘Madman Across the Water.’ I turned up with an acoustic guitar, a mandolin, a sitar, and a banjo. I came up with the intro riff, and Elton said, ‘Oh, I love this. This is great.’ And then we did ‘Holiday Inn,’ and he wanted banjo on it. I said, ‘I don’t think banjo is going to work. I think mandolin would be way better.’ I was true to my convictions, and it worked great.”

Shortly after the sessions, Johnstone was invited to join John’s band.
Dudgeon’s role, Johnstone said, was to provide objective ears. He wasn’t a musician, but that was in his favor.

“Gus wasn’t afraid to say, ‘That part is a bit cheesy. How about changing that? How about this?’ He had an instinctive knowledge of great sound and what was working. He loved our music. His two favorite instruments were piano and acoustic guitar, so it was like we were made in heaven! He wasn’t a player, but he understood guitar sounds better than anybody I’ve ever met.”

Except for four years in the late ’70s and early ’80s, Johnstone has been a constant in John’s band. In ’88, he became musical director. What exactly does that mean?

“It’s a several-barreled job. In the old days, Elton, myself, Dee, and Nigel were a band, and it wasn’t like anybody was in charge. Elton owned up to the fact we were doing what we were supposed to do, and nobody was telling anybody else what to play. We got very lucky. It was meant to be. We’ve since added horn sections and background vocalists, which means I have to find people who not only sing or play great, but aren’t idiots. If you’re travelling around the planet with people, you want to know they’re reasonably cool and reasonably together. That’s half the thing.”

While diehard fans often want to hear artists dig into catalog obscurities during a concert, most paying customers want to hear their favorites.

“With the catalog we have, we’re very blessed. You can’t play it all. And you want to include things people aren’t too familiar with. Elton is totally aware of that. You have to do stuff the audience knows, then throw a few things in. Plus, we jam on stage every night.”

Another consideration is that some songs are popular only in certain countries.

“When we play the U.K., there’s a dance hit Elton did with Thom Bell in the ’70s called ‘Are You Ready for Love,’ which nobody knows in the U.S. It was re-released in 2003 and was a top five hit. Whenever we go to the U.K., we put that back in the set. The same with ‘Sacrifice,’ which was a massive #1 for him in the U.K. and Europe but did nothing here. In France, ‘Sorry Seems to Be the Hardest Word’ is their favorite all-time song. In Brazil, they love ‘Skyline Pigeon,’ which is a deep cut not many people know.”

Through the decades, Johnstone has squeezed in an equally impressive, varied body of work as an in-demand session player. His roster includes Stevie Nicks, Bob Seger, Alice Cooper, Rod Stewart, Meat Loaf, the Pointer Sisters, Olivia Newton-John, Judy Collins, and many others. He has also done movie music for James Newton Howard and Hans Zimmer.

“I’ve always been really grateful for the work I’ve been able to do. My talents tend to make other people’s songs better, or I contribute in a way that brings the song together in a really robust form. That’s what I’ve been hired for. It can be stressful when you’re brought in to play with a really hot or high-level artist, but I’ve always been comforted by the fact I get hired to play because of the way I play. It’s not because they want me to play the dots on a page, it’s because they want me for what I bring to the song.”

He has no plans to slow down after John’s farewell tour. In addition to the documentary, in the next few years he’s preparing a 50th anniversary reissue of Smiling Face and a new reissue of Holes in the Heavens, the 1991 album by his rock band, Warpipes.

“I will tell you this really is the farewell tour. We’re not going on the road again. I’m speculating here, but there may be a one-off thing, but we’re wrapping up this aspect of our career. I don’t know what Elton and his manager/husband David Furnish are planning for him, but I’m sure they have some ideas for Elton’s retirement. This has been a long haul, and you’ve got to stop somewhere.

“For my part, I’m never going to retire. I’m not going to tour, per se, but I might do live stuff. For sure, I’ll be writing songs and music. I’ll carry on playing because I love it. It’s what I do. It’s what I enjoy. Why should I stop?”