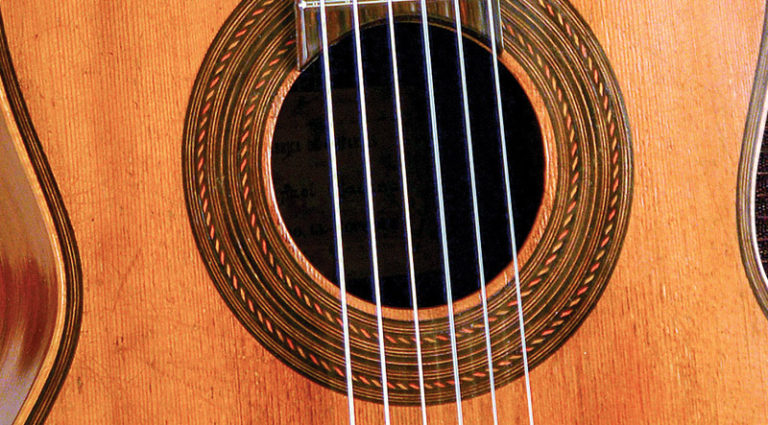 This extremely rare guitar has been dubbed the “Unicorn” by virtue of the fact that for all his fame, it may be the only surviving example of an instrument made by Rafael Casana.

Listed in guitar “genealogy” charts as the link between the early Madrid school of the Ramírez brothers and the regional Córdoba school, Casana was born circa 1866 in Sevilla, and worked in the shop of José Ramírez, I before the turn of the 20th century. At that time, co-workers would have included Enrique García (who later moved to Barcelona), Julian Gómez Ramírez (no relation; he later moved to Paris and was the inspiration for Robert Bouchet), and Antonio Emilio Pascual Viudes (who moved to Buenos Aires in 1909).

Listed in period trade guides as a guitar maker or carpenter, Casana perhaps divided his time between unprofitable guitar making and bill-paying carpentry, which could explain the dearth of surviving instruments. In Córdoba, he occupied two addresses – Calle San Fernando 55 (printed on his labels) and, from about 1910 onward, Lucano 15, where this instrument was made.

Very little is known about Casana, and no known photos have survived, but, based on this example which has survived nearly intact, we can say he was among the most-skilled makers of his era, with workmanship and technical mastery superior to the finest guitars made by José Ramírez, I.

The Instrument
The guitar is made with a soundboard that is well-arched both along and across the grain – a style of construction known then as a “guitarra de tablao,” or literally, a bar guitar. The José Ramírez catalog of circa 1913 refers to them as “guitarras ahuevadas” or egg-shaped guitars. They were also known as “guitarras Sevillanos,” or Sevillian-style, as the method of construction unique to this model originated in Sevilla in the mid 19th century with the Soto y Solares family and other makers. This particular model was very popular with gypsy flamenco players in the late 19th century, and many flamenco artists are seen playing them in photos of the era. They could be made of many types of woods for sides and backs, but the intended usage was for flamenco music.

To produce the highly domed tops, instruments were made on dished-out boards called “soleras,” which were cut to the exact inside outline of the guitar body. The extension for the neck was planed to hold neck angle during assembly, tops were braced with stiff braces (from five to 11 fans), which forced the thin top into the dished portion. The top was trimmed to the edge of the solera and the bent sides were fitted against the solera to meet the top outline. Individual glue blocks, called “tentellones” or “peones,” were glued around the perimeter of the inside to attach the sides to the top. Back linings were installed, the back fitted (which was also usually arched with shaped cross braces), and, once it was glued on, the geometry of the instrument was set before it was purfled and the fretboard/frets installed. Bridges were shaped and installed last.

In the 19th century, this method migrated from Sevilla to Madrid as gypsy flamencos sought larger and richer venues. Madrid maker Francisco González, reputed to have been the teacher of Ramírez, was among the first Madrid builders to adopt this style of tablao as his own model. So, while its likely that Rafael Casana learned this method of construction from Ramírez, he would have been very familiar with these models from his youth in Sevilla, where they were ubiquitous. 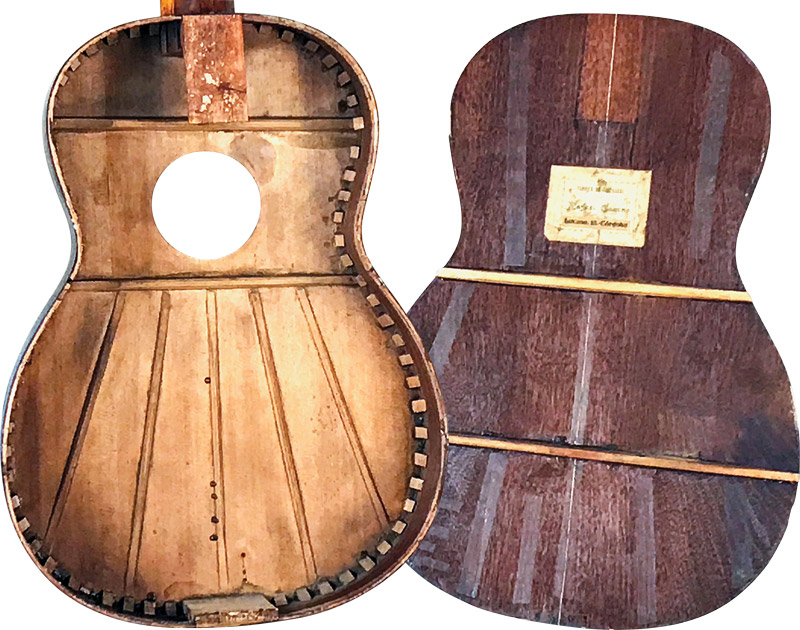 Like many Spanish instruments of the era, the top is made of random pieces of spruce rather than a two-piece bookmatched set typically sold by wood suppliers. The spruce may have been recycled from old piano soundboards or furniture; makers at the time did not throw away anything of value. The sides and back are Cuban mahogany, which was highly prized by guitar makers for its weight, hardness, and stability – a near-perfect wood for sides and backs. The back is bookmatched, and all of the plates are worked to the nth degree of safety and thinness – no margin was left for future refinishing. Fortuitously, the instrument still bears 100 percent of its original French polish of shellac, which was very lightly applied.

By the mid 19th century, Cuban mahogany was a commercially extinct product, having been logged-out by the English furniture industry. As a result, it was often salvaged from broken/discarded furniture bought at flea markets, where certain pieces had hand-sawn veneers thick enough to use for guitar sides. If it had cracks or splits, they simply glued it, sometimes reinforcing the inside with paper. Guitars, being very delicate, were expected to crack anyway.

The fretboard is very notable, as the section from the nut to the first fret is a different piece of rosewood than the rest; the original rosewood blank was apparently too good to discard, but not long enough to reach from nut to sound hole, so Casana augmented the nut end, which was much smarter than by the sound hole, where movement of the soundboard might cause heaving of the two pieces and, consequently, buzzing due to lifted frets.

The bridge is a fanciful shape sometimes used by José Ramírez, Francisco González, and other Madrid makers. By the time this instrument was made, however, this fanciful design was falling out of favor for the traditional rectangular Torres bridge. Because the top is so highly domed, the neck is actually angled a few millimeters back from the side-edge assembly, but when referenced to the plane of the domed soundboard, it’s lifted two millimeters. The precision of the neck angle means the bridge and saddle are very low to the top, as demanded by flamenco players, so there is minimal torque on the soundboard, which is still in perfect shape. The scale is 241/4″ (618 mm) with 1/16″ compensation (most Spanish makers were still working in inches rather than metric). While this seems very short, it’s about the same as a full-size scale with capo at the first fret. With a shorter scale, the same gauge of gut strings might have lasted a bit longer due to the reduced tension.

Internally, the back is attached to the sides via solid bent/crimped spruce linings installed in three sections with the portion going around the waist bend being made of fractured green wood. This was a quick and easy way to bend and install linings. The back averages only 1.6 mm thick and yet only carries two cross braces in the lower bout – a bold and gutsy omission of the traditional third cross strut (near the neck foot). The soundboard cross struts are not made of soft wood, but some kind of light-colored hard wood, possibly basswood or linden. It likely was also recycled from old furniture carcasses, possibly having been drawer guides. Interior work was cut with sharp planes and chisels – there’s no visible evidence of sandpapering.

Decoration
The guitar is fairly elaborate, with multiple purfling lines inlaid around the soundboard edge. Due to their bold width, they’re only about half the thickness of the top, which averages around 1.7 mm, making it a tricky installation. The rosette has two bands of multi-color “rope” combined with varied concentric rings, all precisely inlaid for the partial depth; the interior is minimally reinforced under this area. Setting of the rosette was done precisely, without cutting through to the other side – a defect often observed in Spanish instruments.

The body is purfled with slightly figured maple that contrasts with the Cuban mahogany, and the head was fitted with mechanical tuning machines from day one – an expensive upgrade. We can safely say this instrument was made for a patron of means who must have been a skilled player, as the fretwork and action are perfect, as is intonation. Its head design echoes the pattern used by Ramírez and González.

Historical Significance
The importance of Rafael Casana lies in his move from Madrid, during which he brought this style of tablao construction to Córdoba, influencing Miguel Rodríguez, Sr. (1888-1975), whose early guitars show this Sevilla method of top doming. An example of this influence can been seen in the 1929 Rodríguez instrument shown on pages 86-87 of A Collection of Fine Spanish Guitars From Torres to the Present.

Its worth mentioning that Rodríguez lived on San Fernando #70, just down the street from Casana (San Fernando #55). While there is no formal indication that Rodríguez studied with Casana, the influence is clear in his early instruments, which evolved from the tablao style and morphed into their own model, with touches of influence from José Ramírez, III.

Conclusion
This is the missing link between Sevilla, Madrid, and Córdoba in the dispersal of the tablao-style guitarmaking throughout Spain. While this model had a relatively short period of popularity before being replaced with the flatter Torres, it was favored by gypsy flamenco players, and even made it into the iconic 19th-century painting called “Jaleo,” by John Singer Sargent, in which two guitarists are shown flailing while the singer inspires the flamenco dancer. On the wall behind are tablao guitars hanging in reserve, ready to jump into the maelstrom of Dionysian inspiration. More than any other art of the 19th century, this painting depicts the typical marketplace, and use for these instruments in their time. In this context, it’s all the more miraculous this singular “Unicorn” managed to survive over a century in such pristine condition.

Richard Bruné began making guitars in 1966 and is a former professional flamenco player. He has written for the Guild of American Luthiers and other organizations for more than 50 years and lectured/consulted for many major museums and institutions, along with providing expertise for private collectors. He has contributed to countless books on the subject in addition to publishing technical drawings of iconic Spanish guitars. He is on Facebook, YouTube and can be reached through his website, rebrune.com.