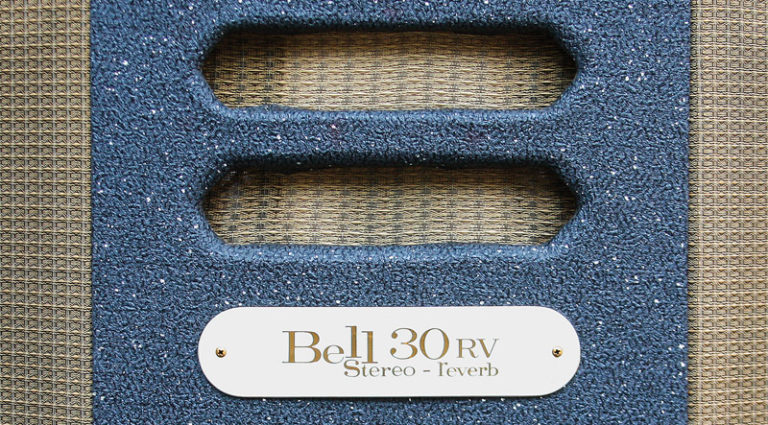 In some parts of the United States of the ’50s and ’60s, the premier amplified instrument was not the electric guitar, but the accordion, and one electronics conglomerate aimed to supply everything an aspiring player might need.

Armed with this info, we might assume the Bell 30 is a re-badged Gibson GA-79 RVT, a similar 30-watt stereo amp (featured here in December of ’18) with reverb and tremolo or the tremolo-less GA-98 RV, which wore the Maestro badge. And often, that was the case. This particular amplifier, however, which comes to us courtesy of VG reader Jeff Dec, is different from both. There are no records to tell us how it came to be, but indications are it was a prototype to test a new layout for the tremolo and tone controls, or a back-to-factory modification to add tremolo to an RV.

Gibson’s wedge-shaped stereo amp was available as the tremolo-equipped/non-reverb GA-79 in late 1960 and early ’61, the reverb-equipped non-tremolo GA-79 RV in ’61, and the fully featured GA-79 RVT from ’61 to ’67. The RV was also commonly sold as the Maestro 30 Stereo-Reverb (a.k.a. GA-78 RV) and the Bell 30 RV seen here, which was also sometimes equipped with an RVT chassis with reverb and tremolo, though its front badge usually still just called it an RV (likely because so few were sold that it wasn’t worth making up separate logo plates). All had nine tubes, while reverb/tremolo models carried stacked concentric knobs for individual Bass and Treble controls and tremolo Frequency and Depth. The reverb-only amps, on the other hand, had individual knobs for all controls.

Take a closer look at the control panel and chassis layout and you’ll see tremolo and individual knobs for all positions, along with 10 tubes hanging from its underside. Inside, the tremolo circuit appears to be factory original (per the wiring and components), but is built on a separate terminal board mounted behind the larger main, wired to a tube socket that’s also mounted differently, carrying a 12AX7 that doesn’t exist in the rest of the range. On the control panel, the “S” and “D” controls (for tremolo speed and depth) have smaller knobs to help them fit between the other controls, and are mounted in holes drilled through the “Gibson” logo that every Bell and Maestro amp still carried.

Back-to-factory modifications were relatively common in the ’50s and ’60, which is a feasible explanation for this amp’s state, even if we have no means of confirming such speculation. It’s in impressively good condition for an amp of its age, and even carries the matching RCA tubes with which it was most likely born, all branded with the Gibson logo.

“I purchased it locally off of Craigslist 10 years ago,” Dec tells us. “The guy said his father had purchased it locally new in the early ’60s along with a ’61 Epiphone Broadway. The pair had been used very sparingly over the years and were in amazing condition. The gentleman told me his father played them mostly over the holidays. I suspect it spent many years under the original cover that accompanied it.”

Fired up, the 30 RV offers a range of configurations either as two individual 15-watt mono amps through their own single 10″ Alnico Jensen P10Q, a bridged 30-watt amp through both Jensens, or a stereo amp of 15 watts per side, intended for use not only with stereo accordions, but also with guitars like Gibson’s stereo ES-355.

“The tone is great, especially with a 335 or other semi-hollow body,” says Dec. “When pushed, it gets into a compressed, articulate, and singing overdrive not unlike an AC15 or similar EL84 amp with 10s. The tone controls are unusual, but usable – they seem to affect volume quite a bit, and when channels are jumped, the amp really does take on more character and volume. It’s very usable in this way to find a great tone with nearly any guitar, though it prefers P-90s and humbuckers.
“The tremolo is simply amazing,” he continued. “I’m not sure if the cabinet design has anything to do with it, but it’s the best I’ve heard, next to my brown Fender Super. The reverb is typical of Gibson – saturated and surfy – quite different than a blackface Fender reverb, and more like a stand-alone tank.”

We don’t know whether Aldo Mencaccini was aware of the modification, though the master who put his brand name to it is still with us, having turned 101 years old in May.