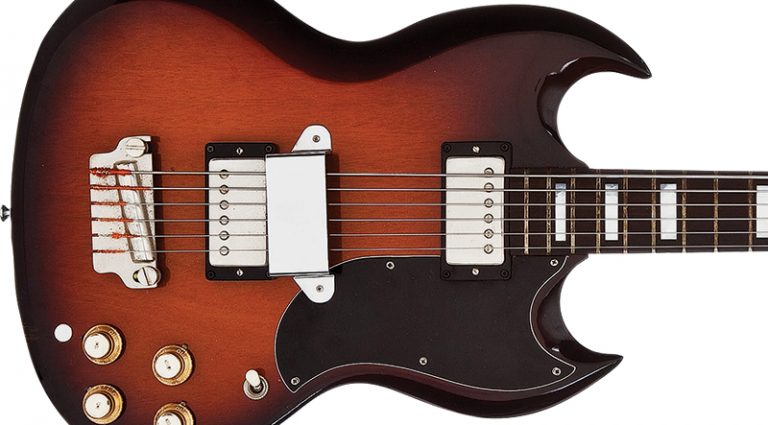 As the 1950s drew to a close, Gibson was locked in a heated battle with Fender for a share of the high-end solidbody-guitar market. But there was one example where the staid company from Kalamazoo managed a definite one-up.

When introduced in late 1959 (for the 1960 model year), the EB-6 was the bass sibling of Gibson’s groundbreaking semi-hollow thinline ES-335. Sporting six strings, a solitary pickup, and a 301/2″ scale, it was tuned an octave below a regular guitar – a true bass guitar. Though it wasn’t the first electric bass guitar (that distinction went to Danelectro) it was fittingly more elegant than its predecessors.

By late ’61, Gibson basses were undergoing drastic change as the company introduced the four-string/two-pickup solidbody EB-3 in the new SG body style. The single-pickup EB-0 also acquired the new silhouette, while the EB-6 was relegated to a small box on a page in the catalog, sans photo, and described as “…similar in design to the ES-335TD.”

The following year, though, brought major changes for the EB-6. For ’62, it was transformed into a two-pickup with the SG body and boosted by catalog hype touting it as, “A new and exciting treat for bass players.” Displayed in the ’63 catalog beside the EB-3, they shared dimensions (12¾" wide, 16" long, 15/16" deep) and scale (30½"), construction features (mahogany body, one-piece mahogany neck, rosewood fretboard with 20 frets) and cosmetic items such as the “crown” logo on the headstock. On both, the neck joined the body at the 17th fret, there were hand rests, slide-up mutes beneath the one-piece bridge/tailpiece, and the only listed finish option was Cherry. The EB-6 joined the crowd with large-paddled Kluson tuners.

The EB-6 was discontinued in ’66. Like the original thinline, solidbody versions are rare, and the two shown here have unique attributes.

The customized white bass has been seen by millions of music fans. It’s from the estate of Benjamin Orr (1947-2000), who brandished it in a photo seen in the Cars’ platinum-selling album Panorama. Refinished and with a mirrored pickguard, it also has a non-original black toggle-surround and rosewood finger rest.

“The guitars used on the shoot were favorites of each member,” McAlpine recounted. “We also shot Greg and David holding an electronic mini-keyboard and a drum, but went with guitar images in the final selection. The background was built especially for the shoot, in their rehearsal room, and Greg supplied background music each day. David was art director for the project.”

After Panorama, Orr continued to modify the EB-6, eventually giving it gold Grover Imperial tuners, gold pickup covers, and gold knobs. He apparently had the tailpiece plated gold, as well.

The other featured EB-6 has a 1964 serial number (157214) and resembles the instrument in the ’63 catalog. Its potentiometers date from mid ’65 and the “Custom” embossing on its truss rod cover, block fret markers, and gold knobs are indicative of custom-order Gibson basses of the era. Like Orr’s EB-6, it’s missing a mute – if it ever had one – and its most curious facet is the relocated instrument jack, moved from the top reportedly due to a crack at the original location (a pearloid plug covers the hole near the controls) and the input is now on the rear control-plate cover. How much of the dark sunburst EB-6 is original versus what’s been modified, refurbished, or refinished (factory or elsewhere) can make for interesting speculation, but whatever was done when and where, it was a professional undertaking.

Gibson’s EB-6 was an interesting, if unsuccessful, model. Both versions were well-crafted, and celebrity associations such as Orr’s, or non-standard instruments, are part of the intrigue of the vintage-instrument phenomenon.

Special thanks to Steve “The Surfin’ Librarian” Soest.