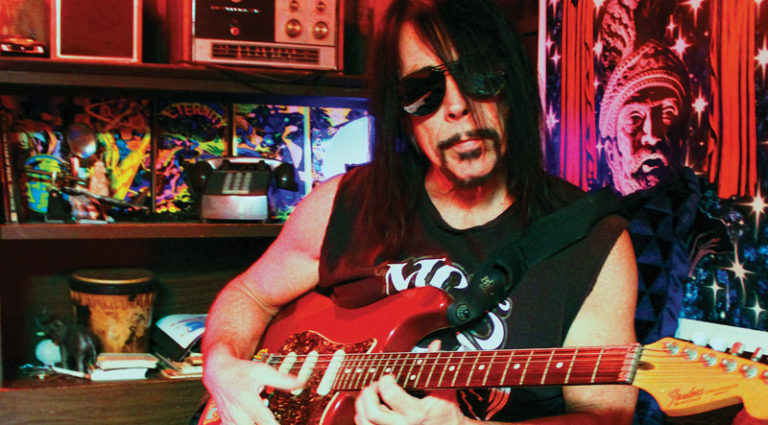 Like most rock bands, the men of Monster Magnet found themselves with a lot of time on their hands once Covid effectively ended tours in 2020. But instead of going into hibernation, Dave Wyndorf and company went to work in the studio, recording an all-covers album, A Better Dystopia, which focuses on proto-metal obscurities (only the hardest of hardcore record collectors will be well-versed with Poo-Bah, Table Scraps, the Scientists, etc.). And as with previous Monster Mag offerings, it rocks… ferociously.

How did an all-covers LP come about?
It came about because we were raring to go. We were on a two-pronged Powertrip tour – the first half in Europe, second half in the U.S. We’d finished the European part in early March and just made it out of Europe before all cities started going down with Covid; Italy had all those deaths two days after we were in Milan. We were riding in a bus in Spain, saying, “This thing looks like it’s going to get really big.” At that point, everybody was guessing. So, we did our gigs in Spain then came home, and we had a three-week wait before the American tour, which we then had to cancel. Then, everybody in the rock business flipped out; “What are we going to do? We’re all out of a job!” We looked around, explored options, and then I brought out the cover-record thing. I had the idea in my back pocket for years, and this was the perfect time to do it.

How did you select tracks?
I had these songs in my head for a long time. I’m a big garage-rock fan, big underground-rock fan – that specific time between the end of psychedelia and the beginning of what we call “mainstream rock.” Before FM radio got money-smart and started programming, there was this weird time in between – about ’68 to ’72 – where FM radio was a place for anything. And that’s where this stuff would show up. It didn’t show up on any charts. It was below the hits, below the Top 100. Under that was just a bunch of leftover freaks – proto-metallers. I’d buy these albums that were on major labels but were basically write-offs. A lot of obscure “What the f**k?” records.

To me, that was the perfect reason to do a covers album. This stuff is really cool, hardly anybody has ever heard it, some of the stuff was [originally] recorded so badly, so I thought, “What if we record better-fidelity versions of these songs, and most important, put them in sequence that sounded like an album by the same band?”

For awhile you were primarily using Gibson SGs. What about now?
This record was done with very few guitars. It was a Les Paul, an SG – I think it’s a ’64 – with a Bigsby on it, and we used a Strat for one song. I ran a 50-watt Marshall – an older one – and every once in a while we’d switch out a different cabinet, but mostly switched mics.

Do you have any vintage gear in your collection?
I have fuzzboxes galore – Old Echoplexes, original Maestro stuff, Electro-Harmonix, Fuzz Face, a couple of British Tape Echoes.

What’s your most obscure stompbox?
I’ve got this one thing – it has nothing but the name “Columbia” on it. I’ve never found out what it was. It’s square, like a giant sugar cube. It’s just the most godawful thing you’ve ever heard. You step on it, and it’s this squeezed out, shredding, almost octavating sound. But I think it’s only octavating because it’s so distorted.

Do you miss the days of being able to find affordable vintage stompboxes?
I think about it all the time. How much fun was that? When stuff was just out there and nobody wanted it. I remember when it started to turn. There was one point in the late ’80s, when Monster Magnet first started, when I’d go to my local music shop and they’d look in the basement and come up with old Electro-Harmonix pedals, and they’d be original price – “Oh, that’ll be $15.” New, in the box! That set me off, so I drove up and down New Jersey to every music store that I could think of, and just cleaned them out.

Out of all Monster Magnet albums, which one are you most proud of guitar-wise?
Spine of God and the last three (Last Patrol, Mindf**ker, and A Better Dystopia). I’m not talking songs here, just guitars – the sounds are better, there are more different sounds, and I experimented a lot. And a variety of different guitars – from Gretsch to Gibson, single-coil, double-coil – to amps and all this stuff. It’s a feast.