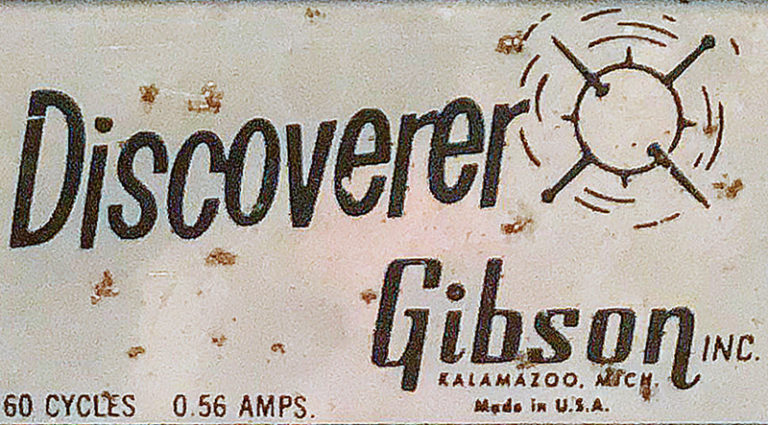 By the end of the 1950s, “space” was the name of the game, and any forward-thrusting gear that hoped to grab a share of the rock-and-roll market was named accordingly.

Fender and Gretsch had gotten into the game early in the decade with the Stratocaster and Duo Jet, and Gibson displayed hipness with the Flying V and Explorer of 1958. By 1960, it was time for amps to begin re-entry.

When it comes to naming rock-intended guitar gear, the suffix “-ette” isn’t exactly forceful. That may be enabling outdated gender semantics, but so it was in the late ’50s and early ’60s. In a world where usherette, bachelorette, and majorette indicate feminine variations; kitchenette, cigarette, and novelette denote diminutives; and leatherette and flannelette imply fakes, it’s difficult to squeeze much marketing muscularity out of a name like Gibsonette. Then with the launch of the Discoverer 1 satellite on February 28, 1958, there was a new name ripe for the taking… even if it took Gibson a while to latch on.

Heading into 1960, Gibson finally changed the name of the GA-8 combo from Gibsonette to Discoverer, complete with a bouncy spaceward logo font trailing a cartoonish satellite across the control panel. A far more thrusting go-getter of a moniker, you can imagine it would draw boys of the day to the amp while also making it more acceptable to mature guitarists who’s jazz or pop gigs required nothing more than the GA-8’s humble 10-watt output. Either way, it boldly leaned into a brave new decade. 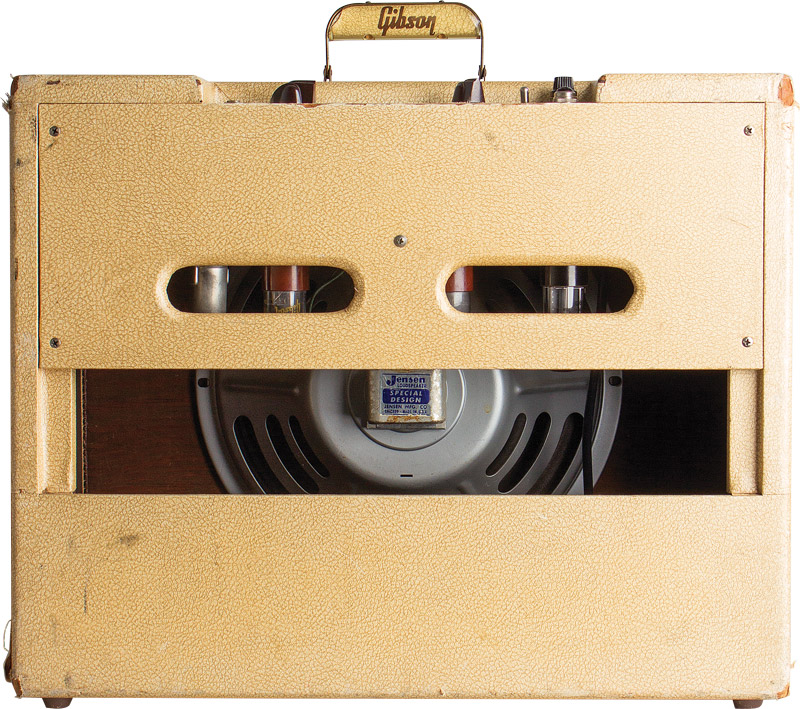 While the name was significant in and of itself, alterations to the form and function played an even bigger role in beefing up the GA-8’s stature. Through the preceding decade, it had gone from the archaic TV-front look with metal grille to the wide-panel cabinet of many classic Gibson combos of the mid/late ’50s, to the minimalist cab with full-frontal baffle and grillecloth. The Discoverer arrived in a similar cabinet in 1960, but received a larger 12″ Jensen Special Design Alnico speaker to replace the Gibsonette’s 10″. And though it’s nothing to shout about, Gibson literature gave the Discoverer a one-watt upgrade from the Gibsonette’s nine-watt listed rating.

What may be most interesting about the GA-8 throughout its run up to and including this rendition of the Discoverer, though, is its rare and unusual employment of a dual-single-ended output stage. Rather than the common single-ended class-A output stage familiar from amps like the Fender Champ, Vox AC4, and a host of smaller “student” combos offered by virtually all makers of the day, the dual-single-ended stage uses two output tubes wired in parallel, to nominally double the power that one single-ended output tube can produce, while not approaching the capabilities of the same pair configured in push/pull.

Plenty of guitar amps today are marketed as “class A” because of the implications of the term – like “Grade-A beef” – but most are simply cathode-biased push/pull amps with no negative feedback. That arrangement is found in the Fender tweed Deluxe along with the Vox AC15/AC30 and the like, and it’s partly responsible for the juicy, harmonically rich tone these amps deliver when pushed to distortion. The thing is, amplification class ratings have nothing to do with the perceived quality of the sound; rather, they indicate a specific measurement of the output tubes’ performance before the point of distortion.

One of the definitive elements of a class A output stage, however, is that the tube doesn’t shut down during any part of the cycle. In class AB (push/pull) amps with two or more output tubes – the Fender Twin and Deluxe Reverbs and their brethren, Marshall JTM45 and plexi, classic Hiwatts and Oranges and many more – these tubes share the load, each shutting down for a portion of the cycle while the other takes up the task (all of this happens, of course, at a speed that makes the shutdown imperceptible). That’s part of what makes such amps more efficient and allows them to create more wattage from any given tube complement relative to a class A amp.

Single-ended amps, on the other hand, are by definition class A since the tube is working on its own and can’t shut down during any part of the wave form. Connect two tubes together in parallel in this configuration, as in the GA-8, and each still behaves as a single single-ended tube in that regard, even though they’re teaming up to double the amp’s wattage.

Given that most irrefutably class A amps are, therefore, single-ended designs, the only way of getting more wattage out of them – if you’re looking for that sound and feel in a bigger package – is to double the output tubes in this way (or, of course, to use bigger, more-powerful tubes). For Gibson, however, this likely provided just a simple way of producing a slightly louder amp that could pose as something a bit bigger than, for example, the GA-5 Skylark, the line’s challenger to the ubiquitous Champ, while still enabling a simple, affordable amp. For players who like to fetishize the whole class A thing, though, the Discoverer provides a slightly bigger, juicier way of getting there – and that also makes it a real sleeper in the sonic stakes amid other popular vintage amps.

Remove the upper panel in back and the GA-8’s chassis exhibits rampant simplicity of design. If you ask, “Where’s the circuit board?” before you tally the paucity of components, the empty space is partly possible because a single-ended circuit requires no phase inverter since the signal doesn’t need to be split and phase-inverted as it would to feed two push/pull tubes. That means elimination of a preamp tube and a handful of related capacitors and resistors. Otherwise, with just a single Volume and Tone control, not much is needed, circuit-wise, so this simple and genuinely point-to-point construction easily suffices.

On the other side of the chassis, the output transformer’s code (GA-9-01) seems to tell us it was the same component used on Gibson’s GA-9 combo, deleted from the catalog after 1959, unless there was some other form of parts nomenclature. In any case, it’s highly possible because the GA-9 was another dual-single-ended design, though it evolved less than the GA-8 and never gained the 12″ speaker or the updated cabinet.

Why aren’t more amps configured like the GA-8 and lesser-seen GA-9, with genuine class-A dual-single-ended output stages? Possibly because that format has its disadvantages, too. The response is generally spongier, more-compressed overall, and with softer low-end. It also tends to elicit more ambient hum since you don’t get the noise-reducing phase cancellation of the push/pull output stage. In addition, because they’re working the full cycle, these output stages run their tubes harder and hotter, putting more strain on components.

On the other hand, the same output tubes used in a push/pull circuit (Gibson GA-20/GA-30 or Fender Deluxe) provide more volume and a tighter, crisper, somewhat punchier overall performance. That said, modern makers have used the dual-single-ended approach creatively in amps like Victoria’s Regal II, THD’s BiValve, and others, so there are options for the tone-seekers who feel this could be “their sound.” Otherwise, even in very good condition, a vintage GA-8 Discoverer won’t break the bank, provided your account holds $900 to $1,250.