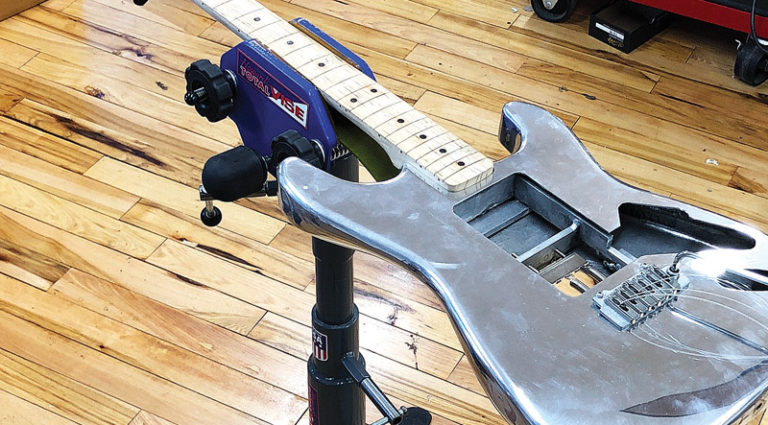 I recently discovered a sturdy pedestal stand that holds a guitar by its neck and makes repair, builds, and setup jobs better, safer, and easier, especially for someone who doesn’t have a shop with benches or permanent fixtures. Called the Total Vise, it beats anything else I’ve built or tried for the purpose.

Designed as a gun-/bow-making vise, maker Jeff Howard was pleasantly surprised to find luthiers liked it, too, so he asked several of us to help him design a guitar-specific version. Here’s how a few shops are using the Total Vise. 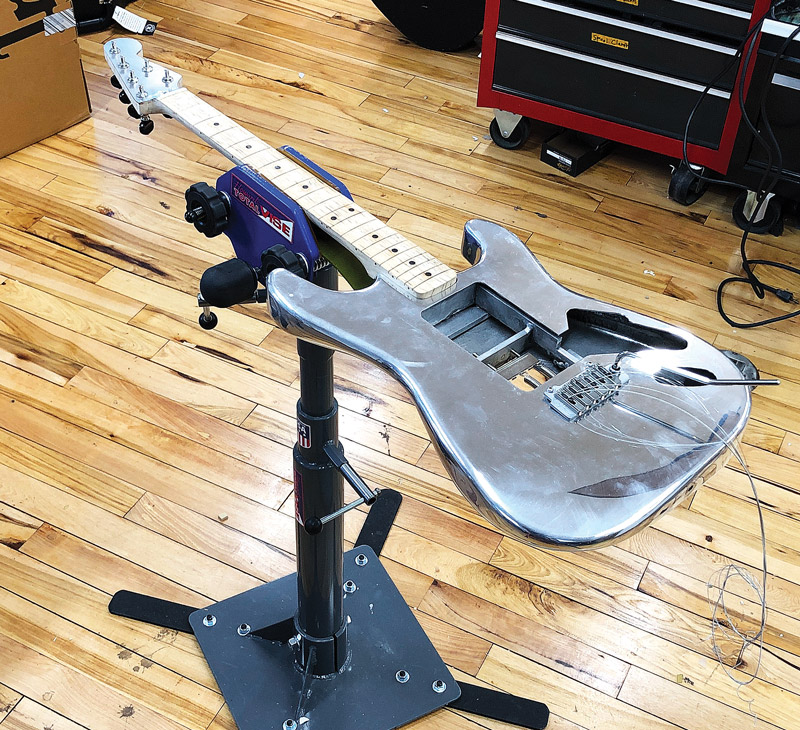 1) The simplest setup for home and part-time/hobby guitar work in a small space uses a height-adjustable pedestal and neck vise. The pedestal’s base has holes on each of its four corners for bolting down, as well as four steel extenders/stabilizers, making it remarkably sturdy even when not bolted (I drag mine all around the shop). The vise jaws open to 4″ and are designed to grip a neck so the guitar can be safely suspended with the body away from the pedestal. 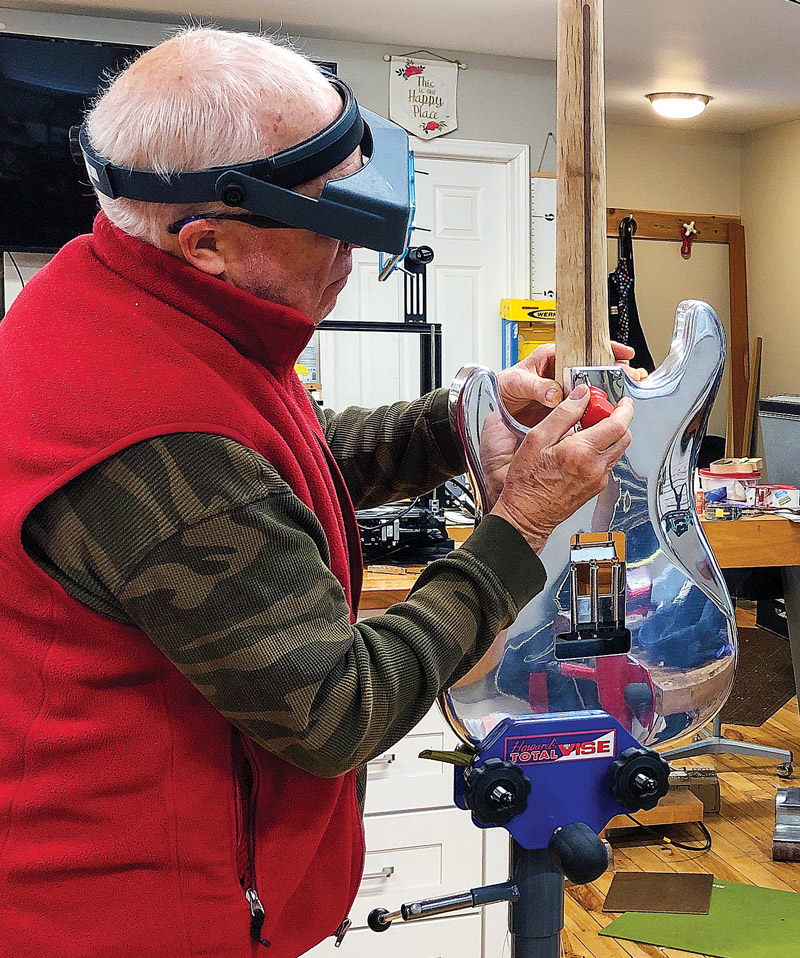 2) When properly configured, Total Vise can raise the guitar to any height comfortable for the job – such as installing a bolt-on neck while standing, with the body held upright and sturdy. 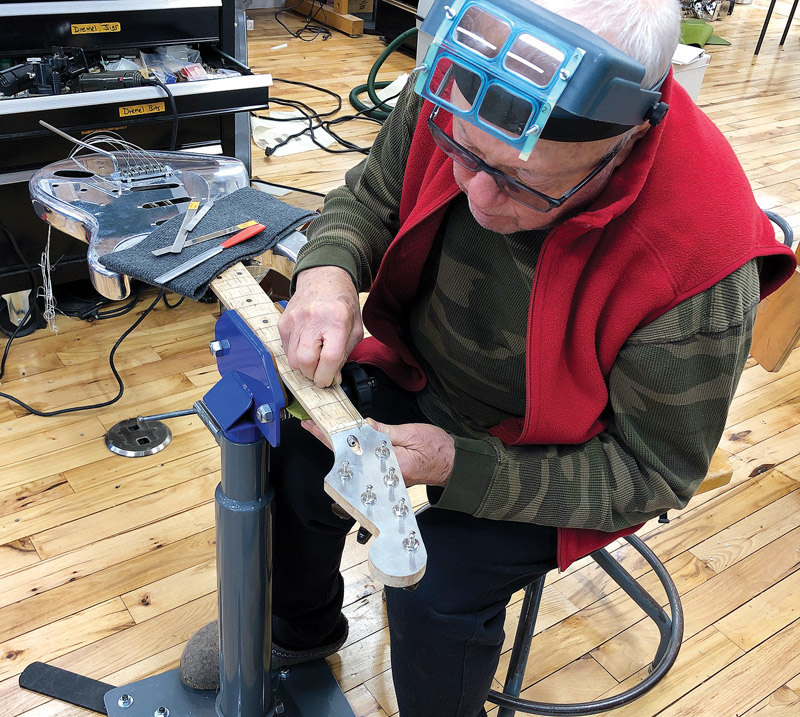 3) It can also be set at a perfect height for seated work. Here, my feet are on the base and my right knee against the column – very comfortable and solid. 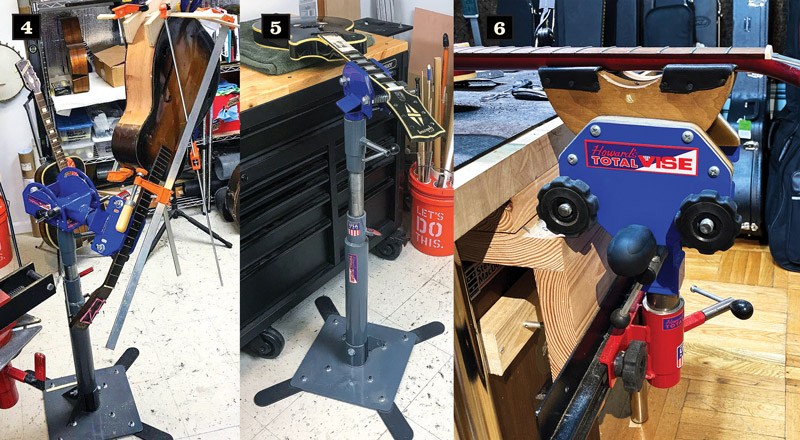 4) Total Vise has several accessory attachments that hold a guitar in any position. One is the Crossover Vise, which inserts to the neck vise and allows tilting to 90 degrees and spin 360 degrees! Ian Davlin sent this shot of his using the neck-/crossover-vise combo while he was replacing the side of a Martin R-18.

5) Ian also uses the basic setup to hold the neck out so that he is free to work while the body is safely on the bench.

6) Evan Gluck has the Bench Mount accessory, which he uses to hold a neck cradle and lets him slide the vise along the front of his bench. He likes the option of leaving the guitar body on the bench with the peghead hanging out of the way. 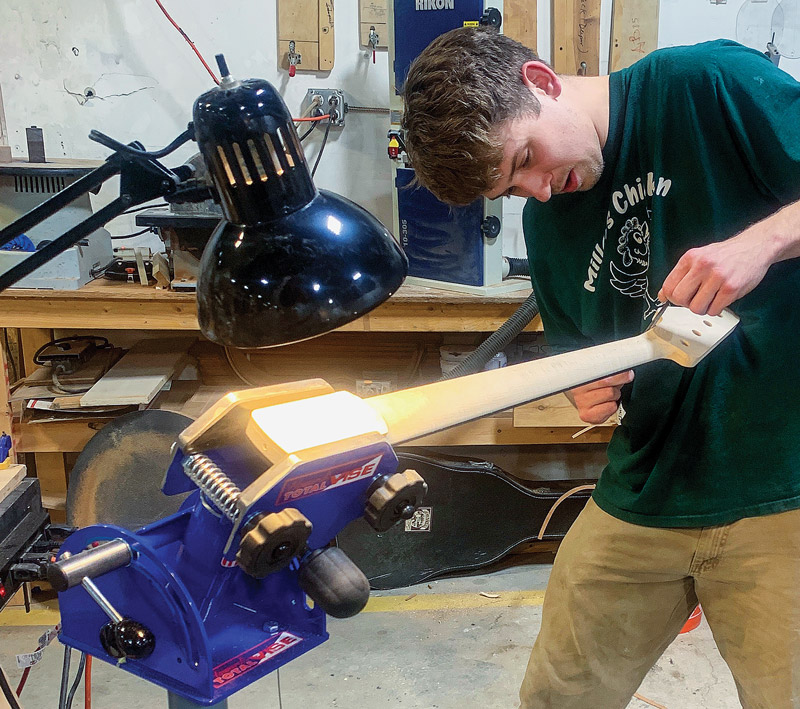 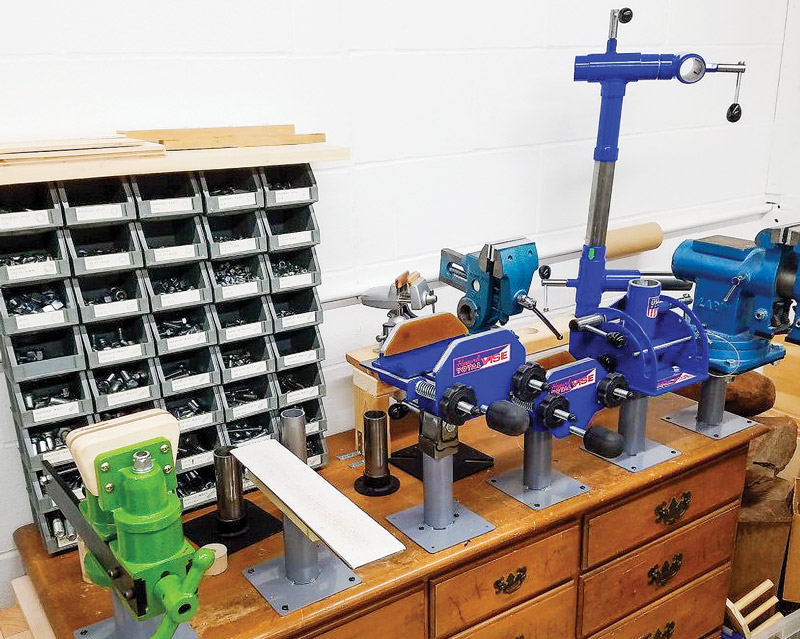 8) Doug Proper is the unofficial king of the Luthiery Total Vise and has every accessory mounted in a dedicated docking station. “I’ve been dancing around guitars and vises most of my adult life,” he said. “It’s great being able to position myself around the work without having to constantly jostle the guitar in and out of position.” 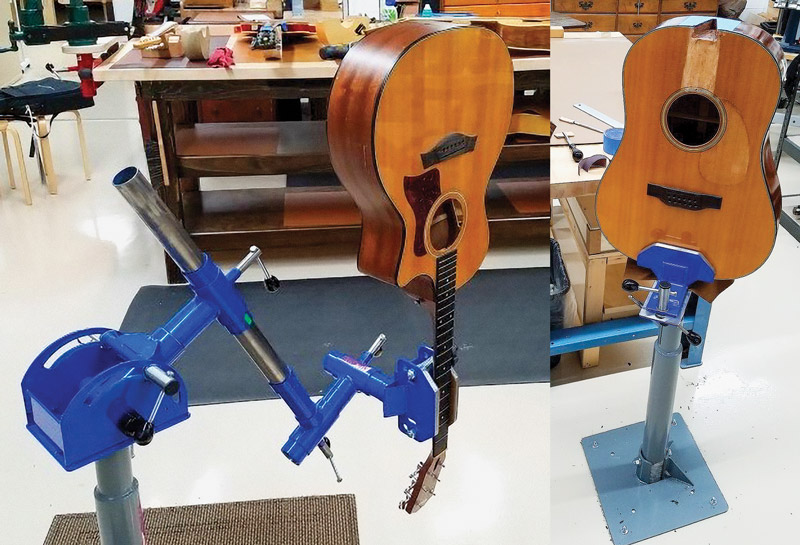 9) Doug was the first to get a knuckle that mounts in the Crossover vise; there’s nothing he can’t do with this rig.

10) Doug has a few pedestals bolted in his shop, including one that holds the #7 vise, which has a wide, sliding rear jaw that can grab and hold deep guitar bodies like this Martin, and makes it a pleasure to re-set a neck. 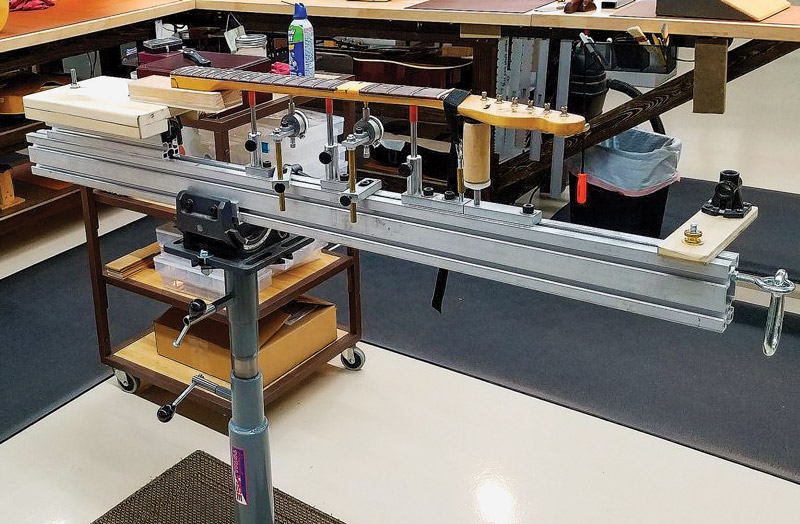 11) A Stew-Mac neck jig in one of Doug’s pedestals. 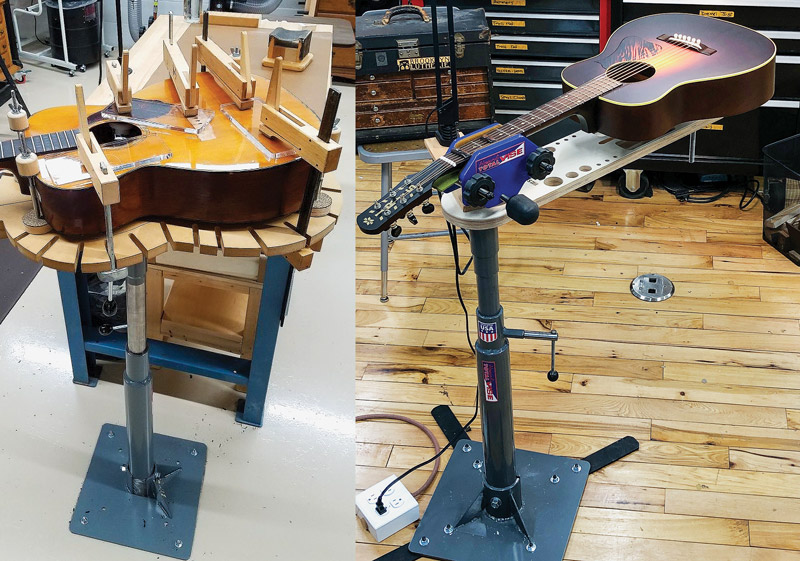 12) Doug made this work board clamping system for structural repairs.

13) This is my Total Vise with the StewMac Body Board. The guitar is an Erlewine DE-11 made by the Iris Guitar Company and modeled after my favorite acoustic – a 1937 Kalamazoo KG-11. Watch for a review in an upcoming issue.