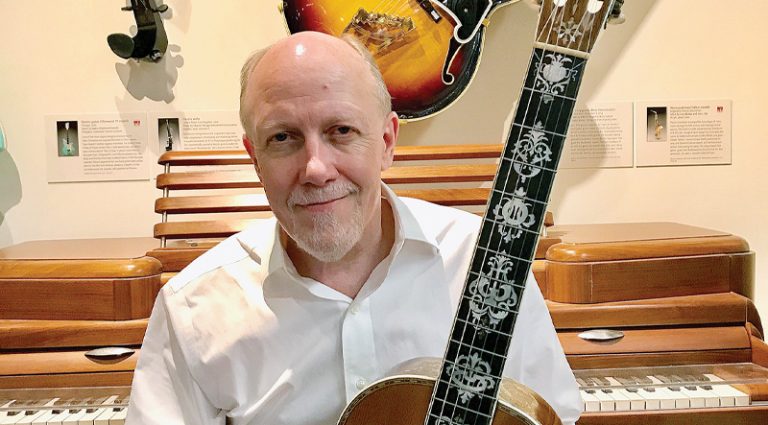 Musical instruments – guitars – present an interesting philosophical dichotomy. On one hand, they’re utilitarian objects whose very purpose – arguably their only purpose – is to create art, to play music. On the other hand, musical instruments can be, and very often are, beautiful works of art in themselves. Play them or display them. It’s an age-old debate between musicians and collectors (who are often one and the same), and a fundamental issue at the core of the musical-instrument collection at the Museum of Fine Arts (MFA) in Boston, which is celebrating the centennial of its creation.

There’s a fascinating story behind how the MFA came to have a collection of musical instruments, and it directly reflects that dichotomy. The idea of collecting and displaying things began in the 1600s, as well-to-do (and generally eccentric) European gentlemen began to assemble “cabinets of curiosities.” These were eclectic collections of oddities that could include mastodon bones, noteworthy paintings, Leif Erikson’s sword, stuffed two-headed goats, live fish, and Egyptian mummies. In 1753, The British Museum became one of the first public museums to exhibit art and artifacts. Boston’s MFA opened its doors in 1876.

Interest in archaeology – “scientifically” studying the past – began in the 19th century and included folks like Francis William Galpin (1858-1945), who began collecting old musical instruments in England. The tale includes a generous dollop of fraud (what’s new?) and the occasional Frankenstein reconstruction because Galpin and his confreres thought the instruments should be playable. Galpin collected approximately 650 instruments and, indeed, is commemorated today by the Galpin Society, dedicated to the professional study and preservation of musical instruments and their history.

Enter Bostonian businessman William Lindsey (1852-1922), his connections to England, and (for unknown reasons) an interest in the Galpin collection, which came up for sale in the early teens. In 1915, his daughter, Leslie, married an Englishman and sailed for their honeymoon on the RMS Lusitania, which encountered German U-boats. Leslie and her new husband were killed, and the U.S. was brought into World War I. As a memorial to his daughter, Lindsey bought the Galpin musical instrument collection, donated it to the MFA in her name, and it arrived in 1917. Thus, the centennial.

According to Darcy Kuronen, the MFA’s Pappalardo Curator of Musical Instruments, the organization’s early attempts at preservation included “restoration” to playability, per Galpin’s wishes. Indeed, the arrival of the Galpin collection coincided with the interest in playing early music on “correct” instruments, a trend that swept Europe and the U.S. in the early 20th century and in which museum-held instruments played an important role. A small subset of performers who use lutes and Baroque guitars thrive to this day.

Today, the MFA has largely abandoned restoring instruments to playability in favor of historical cosmetic fidelity, however, instruments are always available to researchers, and, on special occasions, musicians are allowed to perform on “playable” instruments in the museum’s galleries. Kuronen explains that many of these performances have been recorded and as part of the centennial celebration, with video posted at youtube.com.

On November 16, the MFA will host an event with (among others) Olav Chris Henriksen playing 19th-century French guitars in duo with flutist Peter H. Bloomin in a gallery featuring French paintings of the period.

In 2000, the MFA, under the direction of Kuronen, became one of the first major art museums to feature a successful guitar-specific exhibition. Titled “Dangerous Curves,” the accompanying catalog is out of print but readily available and worth seeking out (Ed. Note: the author, a longtime VG contributor, also served as a consultant on that exhibition and provided several guitars on loan, some of which were subsequently sold to the MFA to become part of its permanent collection).

Some musicians cringe at the thought of guitars sitting in museums instead of being played onstage, as they were intended. But the reality is that there are far more guitars than musicians, and it’s certainly better they be preserved and studied – and, like many of the MFA’s collection, occasionally played – than allowed to fall apart or end up in landfills, which has been the fate of far too many musical instruments throughout the ages.

To view some of the MFA’s collection, visit mfa.org/node/9489.