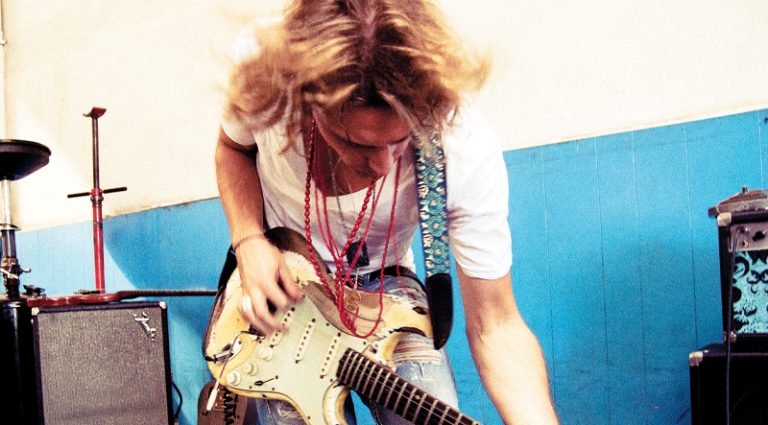 Philip Sayce’s album Scorched Earth Volume 1 was a live recording from 2016 that displayed the kind of blistering blues-rock ferocity that left many asking, “How does he do that?” As a veteran musician and songwriting professional, Sayce has held tenure with Jeff Healey and Melissa Etheridge. His guitar artistry goes hand-in-hand with choice gear. Here’s the lowdown on what Sayce uses to achieve tonal superiority.

How do vintage Stratocasters make a difference?

They have a thing. I can play a new guitar, and sometimes they’ll rival a vintage one, but the mistake is trying to get a newer guitar to sound like an old one instead of celebrating the guitar that it is. I came to a place where I said, “Why am I trying to get this new guitar to sound like an old guitar?” It’s not setting up that guitar for success.

The ’50s and ’60s guitars have a patina, older wood, as opposed to chopping down trees that are still green and wet. Whatever was happening energetically in the world at that time is different. There are so many things we could go into. When you get your hands on a good one, there’s something really alluring about those smoothed-out edges and things that are unquantifiable. Once you find a good one and your heart and soul connect… game over.

What’s your favorite era for the Strat?

’59 through ’65, when they transitioned to rosewood – the Strats I have right now are both from ’63. My main one is called Mother and I’ve had that guitar for 19 years. I saved up for my Mother Strat and it became the criteria for good tone. It’s had between five to 10 re-frets. The original ’63 pickups went south about 10 years ago – I played a solo with a beer bottle and ended up getting beer in the pickups. About a month later, all three pickups said good night.

I called a buddy who lives in Edmonton and said, “Dude, I need some pre-CBS pickups.” He said, “I have a great set that just came out of a ’58 hardtail.” They’re glorious-sounding! So, Mother is a ’63 with ’58 pickups but otherwise it’s pretty stock other than the frets.

The other ’63 is a sunburst, and I first played it many years ago when I lived in Toronto. A good friend was selling it but I didn’t have the bread at the time. Years later, another friend said, “I came across this ’63 Strat and it made me think of you.” He sent a photo and I knew it was the same guitar. It had a unique finish – almost entirely black but with a little sunburst right around the bridge. I ended up selling some things to get it. It’s 100 percent stock.

Those are my two guitars. I play them hard, love them a lot, and I’m glad to have them.

I’ve been traditionally a late-’60s amp guy – Fender or Marshall. I have a ’66 Super Reverb and a ’60s Princeton. Both were completely rebuilt by Cesar Diaz and they are not run-of-the-mill! I’m a huge fan of Cesar’s work. I’ve never heard amps that sounded better after he touched them. The Princeton is like a Diaz CD-100. It’s really beautiful.

I’ve also been using amps by an engineer named Tommy Cougar, who lives in Sweden. I’ve been working with him for about 10 years now. He’s an exceptional amp designer. Another is a head called Gladys; he names amps after famous singers like Gladys Knight.

Do you have a favorite pedal right now?

Fuzz is very important to me. There are so many tones you can get with just a tiny move with the guitar’s Volume knob. I have a Square Fuzz Face that Cesar Diaz built for me that I love, a red ’68 Fuzz Face BC183, and a NKT275 from late ’67, which I found in Austin. They can do a full-on Tube Screamer or “Foxy Lady” and it takes you to that happy place.

What’s next on your agenda?

I’m signed with Warner Music Canada and at the beginning of creating a brand new studio record. I just did a song as part of Warner Music Canada’s 50th anniversary celebration. Steve Waxman asked me to record Joni Mitchell’s “Woodstock.” I sat with it for a while and came up with my own version. I played the song with love and respect.