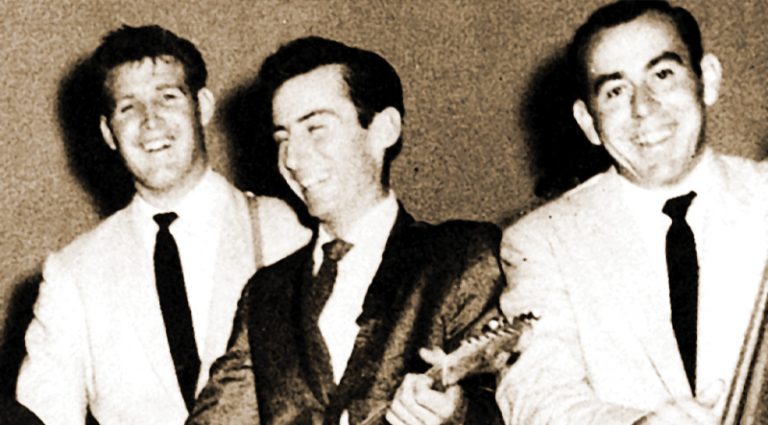 Sonny Burgess, one of the last of the great Sun Records stars, died August 18. He was 88 and had been performing with his old band, the Pacers.

Burgess was born on a farm near Newport, Arkansas, in 1929. After graduating from high school, in the early ’50s he began playing what he called “boogie woogie music” in dance halls and juke joints.

With the addition of a trumpeter – Burgess couldn’t find the sax player he sought – the Pacers returned to Sun several months later with Sonny on lead guitar. Their first record, “We Wanna Boogie”/“Red Headed Woman,” was issued in 1956.

During that interview, Burgess spoke of the glory days pioneering rock and roll.

“I never heard the term ‘rockabilly’ back then. Nobody did. Everybody said, ‘Where’d that term come from?’ I don’t know. We never really pinned it down. When people asked what music we played, we were rock-and-rollers. We didn’t think about ‘rockabilly.’

“It was shocking music to people at the time,” he added. “Elvis, Johnny Cash, Jerry Lee Lewis, Warren Smith, Billy Riley, Roy Orbison, Carl Perkins, Johnny Burnette and the Rock and Roll Trio—we played shows together all over the country. It was wild back then.

“In the Pacers, we had a real show. We used 50-foot-long cables we had specially made for our guitars, which would allow us to jump off of the stage and play in the crowd. One night in ’56, we were playing a show with Marty Robbins, the Maddox Brothers and Rose, and Ray Price at Robinson Auditorium in Little Rock, Arkansas. My guitarist, Joe Lewis, our bassist, Johnny Ray Hubbard, and I all jumped off the stage – and didn’t look before we leaped. Usually, stages were about 12 inches up to three foot high. We just assumed this was the same and jumped off, but there was an orchestra pit and we went down. We must have dropped 10 foot. Johnny Ray’s upright came all to pieces. But the show had to go on, so we climbed back up onstage and kept playing.

“Another time, I tried to dye my hair white. It was black and I wanted to dye it white; Carl Perkins was blue with his blue-suede shows, Elvis was pink and black. I wanted a color, too. I was reading about a guy named Shell Scotty, a detective in pulp magazines, and he had white hair with black eyebrows. I thought that would be really cool, different. Me and my wife, Joann, decided we’d do it – but it turned out red. It was really red. We were heading to California that week to join the tour with Cash in ’57. So the Pacers and I all got red tux jackets with black shirts, black ties, and black pants. I had that red tuxedo and got red shoes, red socks, and played a red Telecaster and red Stratocaster. I sure stood out.

“When Sam Phillips recorded us, he just sat there and rolled tape. He let us set up our equipment wherever we wanted, just like we were onstage. He had that one good mic, an RCA 77, in the middle of the room and we’d all stand around that mic. Sam didn’t say anything; he just turned that machine on and we’d play like he was 10,000 people in an audience. We were a-beating and a-banging around in there, just like we do onstage. And he’d say, “Well, go through it again.” When he got the one he felt was right and sounded good to him, that’s what he put out. He had a talent for putting out stuff that was different, that felt good.

“Back then, we didn’t have any sort of feeling we were doing anything revolutionary. If we had, we would’ve put out more records! We weren’t even trying to make a dollar – there was no money to be made back then. That wasn’t why I was in it, to make money. You had a lot of fun. And you’d meet a lot of gals. You felt good playing it – got your high off the music. You didn’t have to have whiskey or drugs. It was just fun, and you’d get high off that music.”