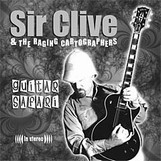 An aptly titled collection of songs, if any guitarist was indeed hunting guitar sounds and styles, finding something like this would indeed make for a successful safari.

Composed, played, and recorded by VG contributor Pete Prown, the disc is full of chops. “Attack of the Mysterons” starts with middle-eastern guitar sounds, morphs into a batch of intertwined guitars, and finally has pinched-out notes that would make Billy Gibbons smile. If you want to hear blazing right hand, start here.

Guitar Safari is a mutant form of ’60s surf; you get tons of reverb-drenched guitar, along with hints of metal and pop, plenty of jazz, progressive rock, funk, and all that lies within those genres. If all that weren’t enough, Prown serves up a country burner called “Haybale,” with lots of twangin’. But then he takes a left turn.

While the beat stays country, there’s some very aggressive rock soloing and then some playing that can only be described as shredding. Before it’s all done we also get some steel guitar from Jim Otis. It’s that kind of hybrid mutant tune that makes up all 11 cuts on the album. Within the tunes themselves there’s always a surprise waiting. And those surprises usually involve some impressive guitar work from Prown. His playing, along with the imagination used in the compositions of the songs, keep things interesting through the entire CD.