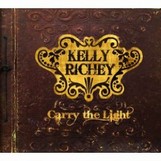 Kelly Richey’s live shows are full-tilt affairs where Richey wrenches blistering lines from her Stratocaster, occasionally using a beer bottle as a slide. At the end, everyone is sweaty and satisfied.

That’s the Kelly Richey of her first 10 albums. On her 11th, she shows her artsy side, with contemplative Robin Trower-like power ballads railing against injustice and pleading for more peace and kindness in the world. The stylistic shift may rankle some who liked having a talented woman, especially a hotshot guitarist, in the ranks of modern blues performers. The field used to boast many female greats, but Sippie Wallace and Memphis Minnie are gone; 2008 saw mighty Koko Taylor enter her ninth decade and Etta James her eighth. Well-known female blues guitarists are even fewer; after Richey, Susan Tedeschi, Deborah Coleman, Sue Foley, and Bonnie Raitt – who for some time seemed to want to play anything but the blues – it trails off sharply. The change might have been smoother if Richey had mixed things up more, added some straightforward blues in place of some of the mid-tempo numbers that sound too much like each other.

A player as versatile as Richey shouldn’t confine herself to one type of music. And no amount of sonic effects and semi-psychedelic material can hide her skill. But she excels at the blues, which makes the change seem almost like a loss.

Likely she will always play the blues, certainly live. If working new styles for a while pays off economically for her like it did for Raitt, old fans can think of it as overdue back wages justly collected.