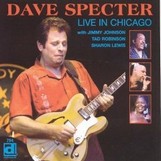 For some time, Dave Specter has made great music that covers a broad spectrum of genres. Known as a blues guitarist, he has never shied from jazz or soul, and this live record finds him mining all types.

The 10 cuts (13 on the DVD) are drawn from two appearances in 2007 and find Specter and his band in fine form. Specter’s chops get the early spotlight on the aptly-titled instrumental “Boss Funk/Riverside Ride,” which lets all the elements of his playing shine through. He’s also a generous bandleader who shares the spotlight with his band. Specter is joined by old friend Tad Robinson on vocals and harmonica for several cuts. “Is What It Is” has great changes and funky feel bolstered by Sharon Lewis, whose soulful vocals are a perfect fit for Specter and the band.

The songs take us through inspired southern soul that shows off Specter’s feel and tone, a shuffle that lets Specter get a bit nasty, and a blues rhumba that lets him step outside the clichés to show off his nice right-hand sweep techniques. Later, Jimmy Johnson joins for an old-fashioned blowing session. Johnson’s guitar and vocal style are in direct contrast to Specter’s, but that’s what makes the mix work. While Johnson jabs in and out, and darts around chords, Specter digs in and holds on. Johnson’s gruff vocal adds a level of Chicago blues history.

It’s not hard to envision why this music will never disappear. And Specter is the perfect guy to carry the torch.