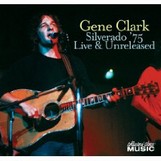 In a band that at various times included Roger McGuinn, Clarence White, Gram Parsons, Chris Hillman and David Crosby, Gene Clark wasn’t overshadowed. He wrote some of the group’s most recognized songs, including “Feel A Whole Lot Better” and “8 Miles High.” Still, he seems to have spent much of his abbreviated career at the short end of the stick.

Internal squabbles in the Byrds and Clark’s own demons helped put him there, but he is belatedly gaining recognition not just for his time with the Byrds, and Dillard and Clark, but for an excellent album with Carla Olson (So Rebellious A Lover), 1971’s self-titled album with Jesse Ed Davis and No Other in ’74 with Davis, Hillman and Danny Korchmar. Silverado ’75 provides a singular opportunity to hear Clark, relaxed and in good form. With Roger White (guitar) and Duke Bardwell (bass), Clark plays bare-bones versions of some of his best (“Train Leaves Here This Morning,” “No Other,” “She Darked The Sun”) and personal favorites (“Long Black Veil,” “In The Pines”) that were a long-rooted influence on a brilliant, versatile, much missed writer and singer.