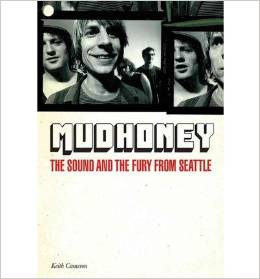 The Year (or so) of Mudhoney rolls on. The long-running Seattle foursome has experienced a resurgence of interest lately. The latest example: this well-researched and crisply written biography from rock journalist Keith Cameron, who’s followed the band ever since a London appearance 25 years ago.

Most everyone knows the drill by now: Mudhoney fused punk and metal to basically invent “grunge” while its peers (Nirvana, Pearl Jam, Soundgarden) reaped most of the accolades. But an endearing sense of humor coupled with a we-don’t-give-a-crap attitude and top-shelf garage rock riffology has fueled a long and productive career.

Cameron covers everything in grand detail, providing a trove of biographical info. He also expertly deconstructs the entire Seattle scene, aided by interviews with all the big players (producer Jack Endino, the Sub Pop label folks, etc.) and a refreshing across-the-pond perspective shaped in real time as everything went down. The book boasts a great collection of rare photos as well, many in color.

“They’re four guys who got together and played music for fun, and the grand plan ended there,” Cameron notes. “Their firm hold on what’s important about their band also explains why they’re still here; it’s about integrity and civility, about growing older together, about making records with a real time/real life vitality; about knowing the identities of ‘them’ and ‘us’.”

That sums things up nicely.