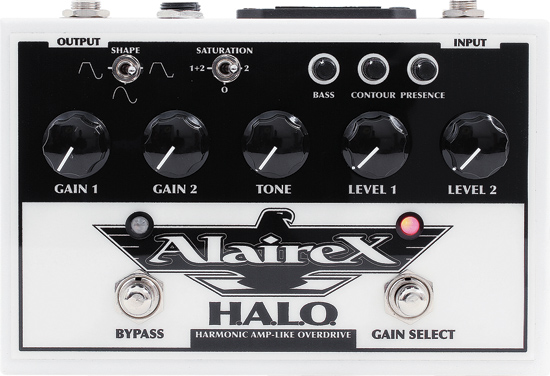 H.A.L.O. is an acronym for Harmonic Amp-Like Overdrive, and the box is two analog ODs in one, with separate Gain and Level controls. Its left and right footswitches correspond to LEDs that indicate which channels are active.

Designed to run through a clean amp and be a fundamental component of a guitarist’s tonal footprint, the H.A.L.O. sports a three-way Shape toggle that controls distortion characteristics. The left position offers asymmetrical clipping and a darker overdrive/distortion, the middle position offers a clean boost, and the right position is a symmetrical clipping mode with brighter overdrive/distortion.

The Saturation toggle offers three post-gain options. The left position is on in both Gain 1 and Gain 2 settings, middle is off, and right is the on position for Gain 2 only. There are separate Gain and Level knobs for each channel and a Tone control that governs both circuits. The icing on the cake, however, is a tone-sculpting Bass knob that controls low-end, a Contour knob for the midrange, and a Presence knob that covers high-midrange frequencies.

Tested with Teles, Strats, combo amps, and high-gain heads, the H.A.L.O. offered a universe of clean boost, natural overdrive, and even-order harmonic distortion. Patient manipulation resulted in steroid-infused country leads or filthy heaviosity, all with a luminous sheen. The H.A.L.O. doesn’t do full-on metal, but it’ll push a high-gain amp over the cliff with upscale complexity and dynamic responsiveness.

Despite the number of knobs and switches, the H.A.L.O.’s functionality is easy to decipher and adds a luxurious quality to even the dullest amp. Both circuits offer rich crunchiness, but Gain 2 has more saturation and treble. Everything about the H.A.L.O. yields serious sustain and super-dynamic touch-sensitivity. It adapts to myriad musical styles and yields angelic harmonic overtones. It’s powered by a 9-volt battery or an external power supply of 9 or 18 volts DC.

The H.A.L.O. is an excellent tool for creating inspired variations in sag, dirt, or EQ-boosting to push blackfaces, tweeds, or dirty heads. It’s a solidly constructed effect that should live on your pedal board for years to come.