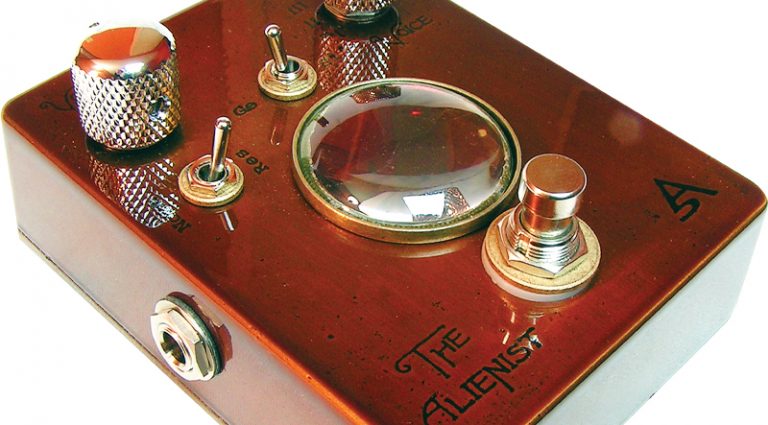 Gather ’round, children, for a scary bedtime story. Once upon a time, there was no such thing as a high-gain amp. So, wizards built treble boosters – like the Dallas Rangemaster – to add high-end response. Other sorcerers came up with a Top Boost modification, which they added to the Vox AC30. Then a mad scientist created a Frankenstein monster known as the Marshall, whose higher gain meant treble boosters would be largely lost to the mists of time.

Lost, that is, unless you have a vintage amp and you’re chasing those vintage tones. Which is where a magician named Dan Albrecht, founder of Area 51 Tube Audio Designs, steps in. His Alienist pedal breathes new life into the treble-booster concept – and in an interesting blend of old-fashioned and newfangled ways.

To start with, the Alienist looks suitably steampunk. It’s housed in an aged-copper-colored box with a portal lens in the center showing the eerie glow of the hard-working innards.

Those hand-wired guts include both old-school low-gain NOS germanium and new-tech higher-gain silicon transistors, switchable via a toggle that offers two sonic paths to mate to your guitar, amp, or the voice you hear in your head.

The Alienist was tested with a ’55 Fender Esquire and a tweed Deluxe. Now, few people have ever complained about the tone of a’59 Deluxe, but with the Alienist in the path, the array of tonal colorings was astounding, opening up the amp’s range in many ways.

To be sure, the Alienist is not simply your basic treble booster (Albrecht calls it a “Voicing Boost Pedal”); beyond the choice of the two driving transistors, the effect also has a six-position Voicing selector.

The effect helps to truly wake up a dark-sounding amp, enhancing its front end to balance out the shadowier shadings of tone. At the same time, the Alienist provides a wider variety of sounds under your fingertips as its boost broadens your amp’s range, which you can then control better than ever via the Volume and Tone knobs on your guitar. This greater touch sensitivity provides everything from shimmering cleans to dirty lowdown – all by way of those guitar tweaks.

Mixing and matching transistors with the Voicing options yields a pleasing range of sonic possibilities. Go for the high-gain silicon transistor with a low Voicing setting, and your tone is pure fat. Adjust the Voicing and you can dial in some overdrive (thanks to the boost) and some glorious second-order harmonics in those trebly upper registers. Talk about singing. Darken the amp, guitar, and the Alienist’s voice and you can mimic Clapton’s vaunted “woman tone” – and this from an Esquire.

The Alienist’s output is also especially responsive to pick attack and how hard you dig into the strings. Ease back and relax, and you get warmth and comfort. Dive in, and you’ll find new edges and angles to your sound. The pedal’s other toggle (Norm/Res) activates a filter stage that lends it some cocked wah character and harmonics – a unique facet of the circuit.

The Alienist’s build and componentry are also impressive: audiophile-grade resistors and capacitors for low hum and noise – as well as the best tone possible – plus Switchcraft #11 jacks as used on vintage Fender amps all ensure that this is an effect built to last.

Of course, a stompbox without tone isn’t worth stomping on. But the Alienist also wins points for being the coolest-looking pedal to come through this reviewer’s mailbox in a long time. From that copper steampunk styling to the etched-in gothic script to that menacing glowing eye – this is one manmade tone monster.