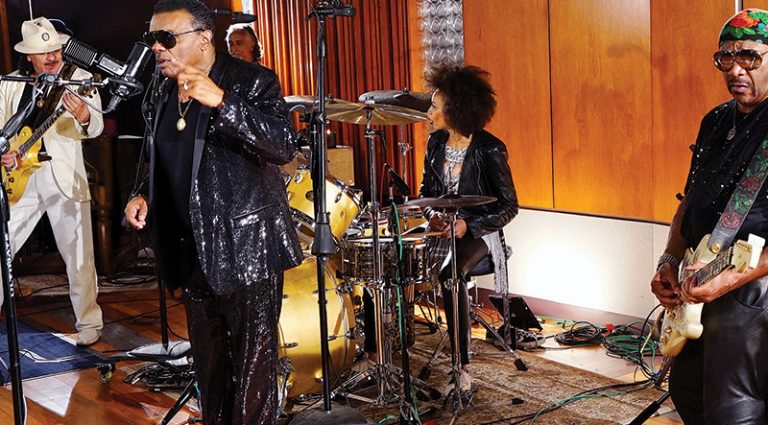 Ernie Isley was a hero to a generation of young, bell-bottom-clad guitarists who wore afros and enveloped themselves in soul crooners and the funkiness that caused involuntary dancing. Positioned in one of the greatest R&B bands – the Isley Brothers – he brought soaring, fuzz-saturated lines and beautiful ornamentation to rapture-inducing soul music. Albums such as 3 + 3, The Heat Is On, and Harvest For The World uplifted the masses with conscious lyrics, irresistible grooves, and the heavenly pipes of brother Ronald.

Conversely, Carlos Santana is the father of Latin rock. Say what you will about his lean guitar vocabulary, his sonic thumbprint has been recognizable for more than 40 years thanks to a style that always put soulful melodies first while effortlessly traversing blues, pop, rock, and fusion. His history of employing the philosophies of peace and unity into contrived, yet super-accessible product netting millions of dollars may turn off critics, but he funds passion projects that lack mass appeal.

Now, Power Of Peace combines the talents of Ronald and Ernie Isley with Carlos and wife, drummer extraordinaire Cindy Blackman. It’s a substantive soul-rock record with the spotlight squarely on Santana and Ronald Isley. It stands upon the songwriting talents of Stevie Wonder, Curtis Mayfield, Marvin Gaye, Burt Bacharach, and Willie Dixon as a means to inspire. Produced by Santana, he gets assistance from a small legion of session cats including keyboard guru Greg Phillinganes.

The album rocks with “Are You Ready” and “Total Destruction To Your Mind.” Santana’s thick-but-elegant tone scorches over the first track while Ernie drops in for the second, eventually ending in a fiery duel. Ernie kills with his signature fuzz/Uni-Vibe recipe.

Ernie plays on four of the 13 tracks, but when he gets to bat, he hits it out of the park. He plays classy rhythms on Billie Holiday’s “God Bless The Child,” and takes Carlos to school on “Body Talk” and “I Just Want To Make Love To You” with blazing soul and intensity.

Ronald Isley is a national treasure. His maturity mixed with his patented sultry vocalizations can still make women swoon as on “Gypsy Woman,” “What The World Needs Now Is Love Sweet Love,” and “Mercy Mercy Me (The Ecology).” Santana has never sounded better. He utilizes a diversity of sounds and melodic inventions to scorch, as well as caress.

Power Of Peace is a beautiful album brimming with positive messages, lush musicality, and love.

The Misunderstood, Fat Mattress, and others