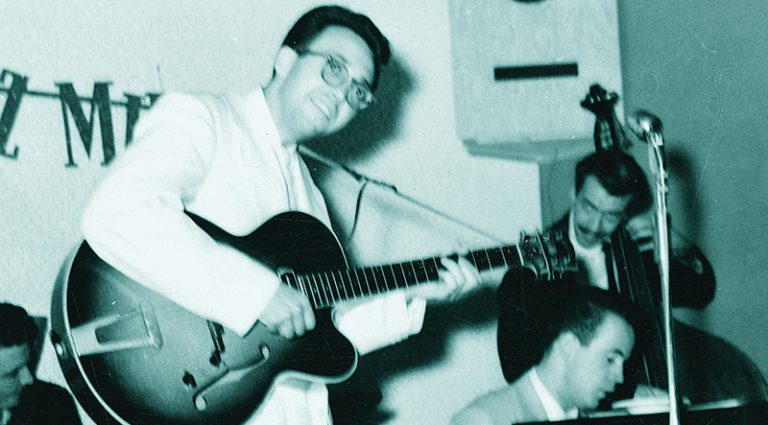 A year after Barney Kessel began recording his now-landmark material for Contemporary Records, he performed at Phoenix’s Jazz Mill backed by the house band, the Jazz Millers. The event was captured on a portable tape recorder by young audiophile Jack Miller in clear, well-balanced monaural. This seven-song continuation, like 2017’s Volume 1, comes from Miller’s tapes.

Kessel’s inventiveness and fire are on full display for “Mean To Me,” which starts with a masterful flourish of chords. He states the melody in unison with Jolly before embarking on a masterful improvisation supported by bassist Gene Stoffell and drummer Art Kile.

Everyone cuts loose on “Tea For Two” before Kessel spins off some breathtaking solo lines. “Indian Summer” also reflects his creative flair. On “Let’s Fall In Love,” Kessel and Jolly again play unison before their respective solos.

A largely self-taught virtuoso firmly rooted in bebop, Dick Garcia gained visibility during his 1952 stint with pianist George Shearing’s popular quintet. In ’56, he won Down Beat’s critics’ poll in the guitar category and recording this, his only solo LP (reissued on vinyl).

Working with three distinct instrumental lineups, Garcia demonstrates his decidedly cool prowess on seven standards and three originals. Clarinet, bass and drums surround him on “I Don’t Want To Set The World On Fire,” “Have You Met Miss Jones,” and the original “Potatoes.”

With a piano trio, Garcia explores the witty original “Kimona My House,” “Like Someone In Love,” and “Ev’ry Night About This Time.” The pianist on these tracks, described in the notes as “a recent addition to the New York jazz scene,” is Bill Evans, soon to become one of the greatest of all piano voices.

The third combination surrounds Garcia with a rhythm section and alto saxophonist Gene Quill, tackles four tunes: Garcia’s “The Deacon,” “If I’m Lucky,” “It Could Happen To You,” and “Stompin’ At The Savoy.” He would appear on other recordings, but this was Garcia’s definitive artistic statement.