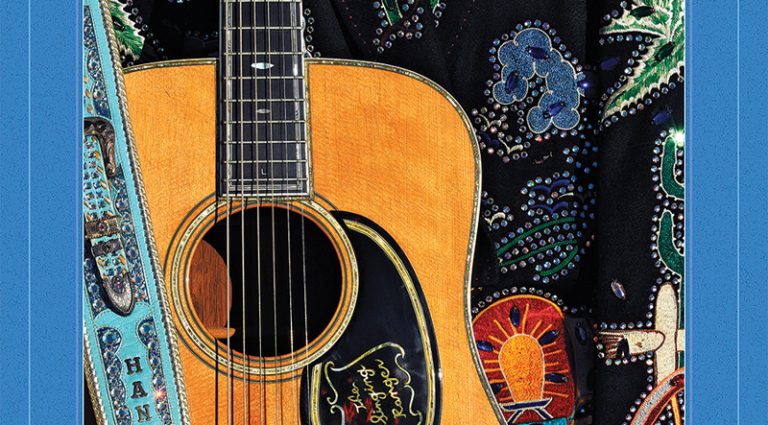 Somewhere along that lost highway, plainspoken, straight-from-the-heart country music got all gussied up with rhinestone suits and fancy guitars. Mac Yasuda may hail from Japan, but he understands the music and culture better than many, and his collection of classic country duds and vintage guitars chronicles that love affair.

Yasuda and co-author Jim Washburn need little introduction. The former has authored several landmark books on other corners of his far-reaching collection, while the latter has penned two essential Martin histories. That should be enough to inspire you to pick up this volume without further ado.

The oversize, 256-page book is divided into 35 chapters with 100s of photos focused on classic country stars, from the Sons of the Pioneers to Hank Snow, Thompson, and Williams to Buck Owens and more. And Yasuda is the current custodian of these guitars that they all once played.

In large, gorgeous staged photos of the instruments backed by detail shots, the duo tell not only of the music and the stars, but also about the greater history of country and its show culture.

The story runs from working-man guitars like Red Foley’s well-traveled 1930 Martin OM-18 and Sons of the Pioneers’ Karl Farr’s ’51 Fender Broadcaster to Hank Snow’s bedazzled early ’60s Gibson J-200 custom with its classic inlaid neck signature. And then it all circles back again to Ricky Skaggs’ basic ’49 D-28, battle scars and all.

The collection of guitars is downright, jaw-dropping incredible. As you’d expect, they’re mostly Martins and Gibsons from the 1930s-1950s – and top-of-the-line D-45s and SJ-200s at that.

But there are also instruments from Stromberg, Sho-Bud, Dobro and Regal, Mossman, and Paul Bigsby (such as Hank Thompson’s Bigsby-necked 1948 SJ-200). And the crown for the most outrageous guitar here? That must go to the dazzling ’50s flat-top built by Edmonton, Alberta’s Frank Gay for Ferlin Husky.

So with all this six-stringed glory, who cares about the Nudie suits and jeweled ten-gallon hats, huh? Yet the fancy duds and star guitars go hand in hand in telling the tale of country history. A stellar book.