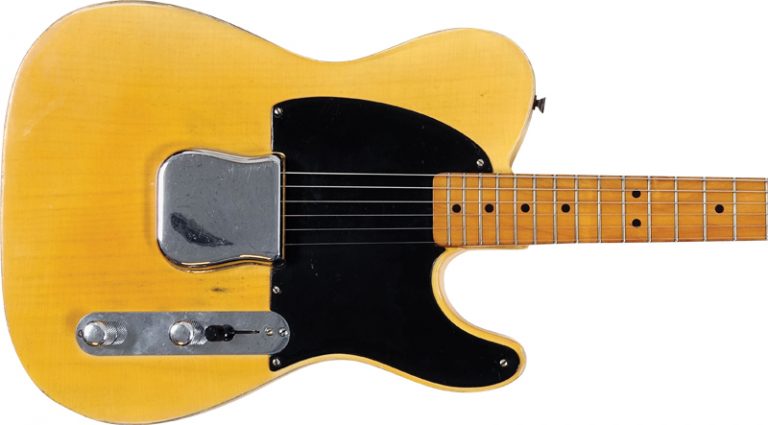 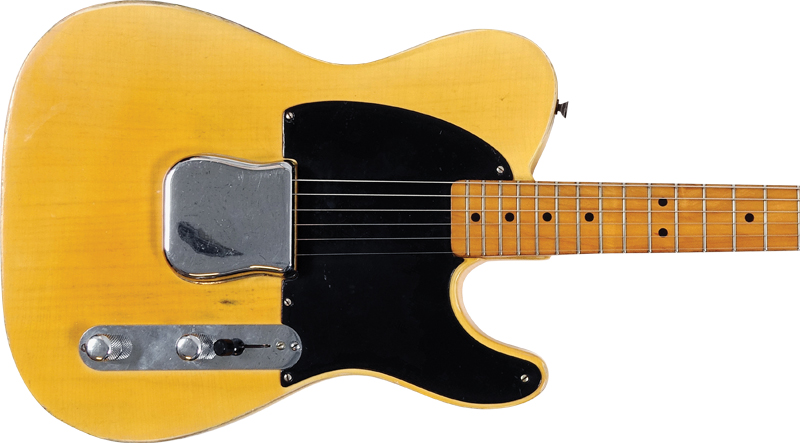 As a high-school student and emerging guitarist in Houston in the early ’60s, John Andrews couldn’t get a club gig without knowing “Okie Dokie Stomp.” The famed track by Clarence “Gatemouth” Brown was the most requested instrumental on the Gulf Coast club circuit at the time – more, even, than Bill Doggett’s “Honky Tonk.”

Gatemouth Brown was a local who started playing guitar professionally in the mid ’40s, inspired by T-Bone Walker to move from behind his drum kit to center stage with his DeArmond-equipped Gibson L-5.

A strange twist of fate saw Brown make a name for himself by jumping onstage after Walker – a blues superstar at the time – fell ill midway through a set at The Bronze Peacock in ’47. Sensing fellow Houstonians were growing restless with the wait, Brown shouldered Walker’s guitar and launched into a jam that later became “Gatemouth Boogie.” Walker eventually returned, but, seeing the young man holding his own with the crowd, ceded time in the spotlight.

The performance spurred club owner Don Robey to help Brown get signed to Aladdin Records, then soon after create a label – Peacock Records – to showcase Brown’s songs and playing on guitar, fiddle, and harmonica. They scored a chart hit in ’49 with “Mary Is Fine”/“My Time Is Expensive.” Brown never took to being called a blues artist; his work was a mix of traditional blues, country, jazz, bayou, R&B, calypso, polkas, and other forms. His legacy as an elite post-war guitarist – and his impact on generations of players – came thanks to instrumentals like “Boogie Uproar,” “Gate Walks to Board,” and “Okie Dokie Stomp,” which charted in ’54 and arguably provides the best demonstration of his style.

In ’66, Brown led the band on “The !!!! Beat,” a syndicated TV show filmed in Dallas but hosted by famed WLAC (Nashville) disc jockey Hoss Allen. He then moved to Nashville, where he recorded several country singles and became a fixture on “Hee Haw,” playing alongside Roy Clark and various country artists. 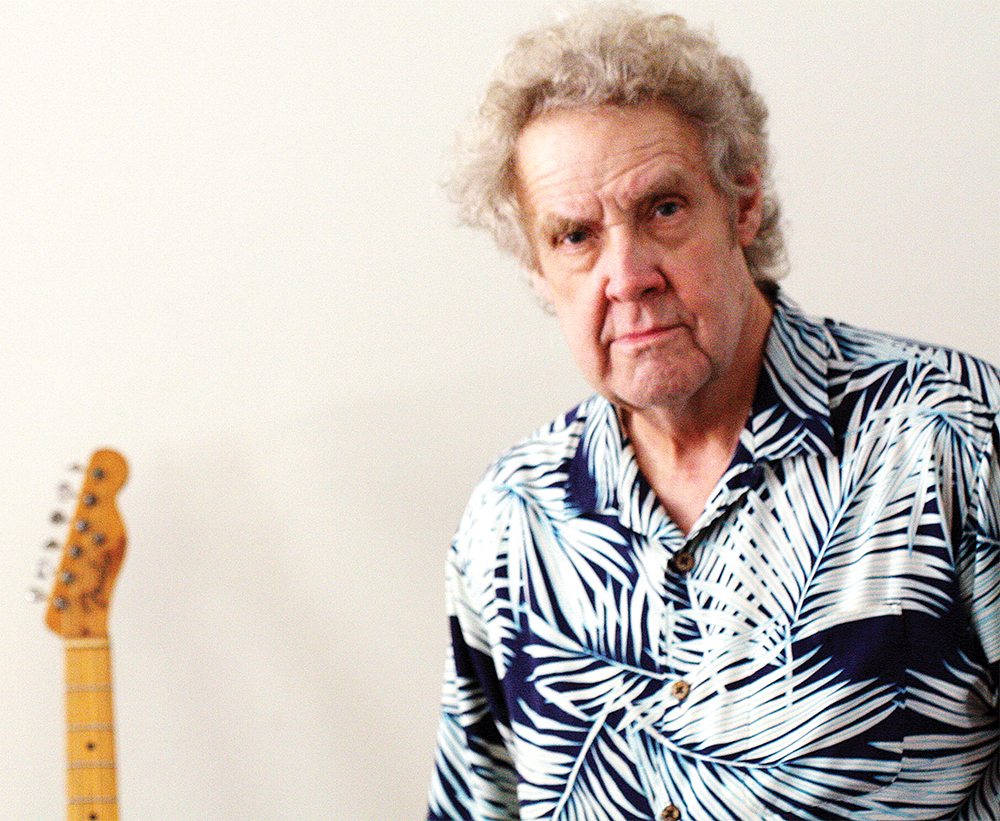 “[Gatemouth] asked, ‘Where’d you get that?’ and I told him about H&H Music and how Red Novak told me he’d played it.” – John Andrews

In the ’70s, he became popular in Europe. He recorded with two French labels, toured 12 times, and became a U.S. Department of State music ambassador. In ’79, he played a six-week/44-date tour of the USSR.

Back home in the ’80s, he recorded with Rounder and Alligator, won a Grammy in ’83 for Alright Again! and played nearly 300 shows each year. Along the way, he won eight W.C. Handy Awards. In ’99, he was inducted to the Blues Hall of Fame. Brown was 81 years old when he passed away in 2005.

Much of John “Toad” Andrews’ musical education in the early ’60s derived from frequenting “battle of the guitars” jams at Club Ebony, in Houston’s Third Ward. There, he’d watch guys like Brown and Albert Collins “cut heads.” 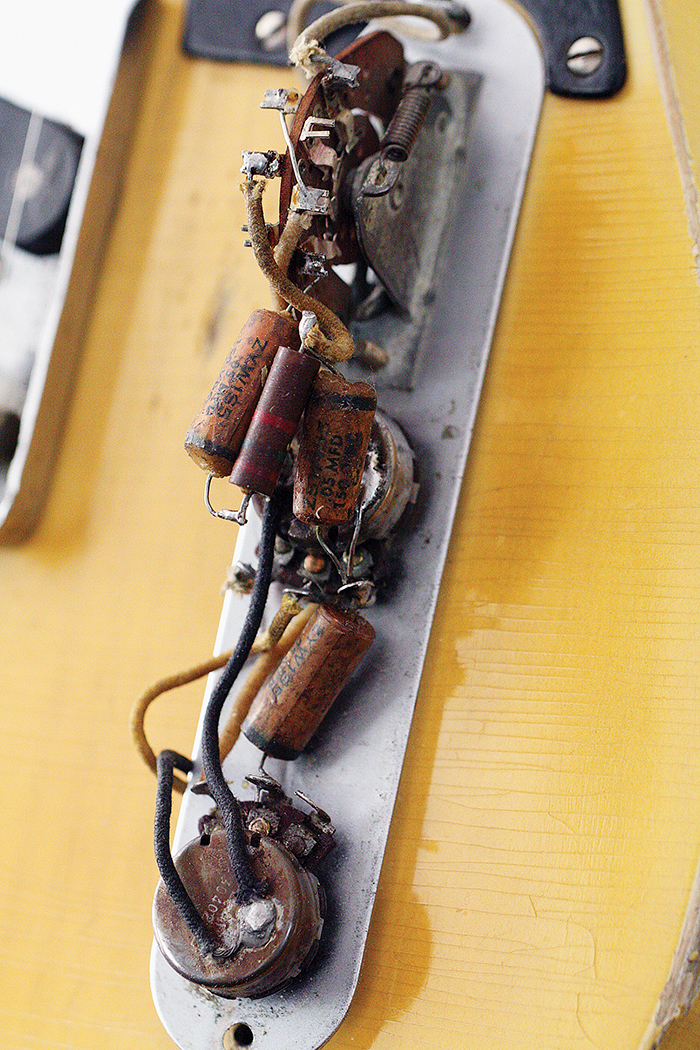 “Those two were especially interesting because they picked with their thumb and fingers, played in open turnings with a clamp (capo), and both played Fenders,” Andrews said. Blues lore says it was Gatemouth who turned Collins away from the Epiphone he used fronting the Rhythm Rockers to the single-pickup solidbody that would help him earn the nickname “Master of the Telecaster.”

By the early ’70s, Andrews had spent more than a decade playing in bands when, in the midst of a stint with his band, Mother Earth, at Houston’s Liberty Hall, he paid a visit to H&H Music to see his friends Texas Tom and Red Novak.

“When Red saw me, he said, ‘I’ve got something for you,’ and he disappeared to the back. He returned with a beat up old Esquire and handed it to me saying, ‘This is the guitar that Gatemouth played on “Okie Dokie Stomp.”’

Though Andrews doesn’t recall whether Novak gave the guitar to him or asked the going rate of about $125, he had an amazing guitar/conversation piece that he played every so often over the following 20 years before the occasion arose for it to resurface thanks to Andrews’ son, Jake, who in 1991 was a rising prodigy on the Austin music scene.

“That March, Jake was invited to do a guest spot on ‘The Texas Connection’ with Gatemouth,” he said of the TV program that was produced by the folks at “Austin City Limits.”

“Jake took his Duo-Sonic and I took the Esquire along to show Gate. It didn’t even have strings, but while Jake was holding the Esquire, Gatemouth – who could be surly – came up and asked, ‘Boy, is that the guitar you’re going to play?’ Jake said, ‘No, but my dad says it’s the one you played on “Okie Dokie Stomp.”’

“Gate said, ‘Where’s your dad?’ and Jake motioned to me. Then he asked, ‘Where’d you get that?’ and I told him about H&H Music and how Red Novak told me he’d played it on the original recording of ‘Okie Dokie Stomp.’ He asked if it had a date, so I removed the neck and sure enough there was writing – ‘TG 2-1-51.’ Gate said, ‘If Red said that was my guitar, then it’s the one Leo Fender gave me in late 1951 and I recorded “Okie Dokie Stomp” on it.’ 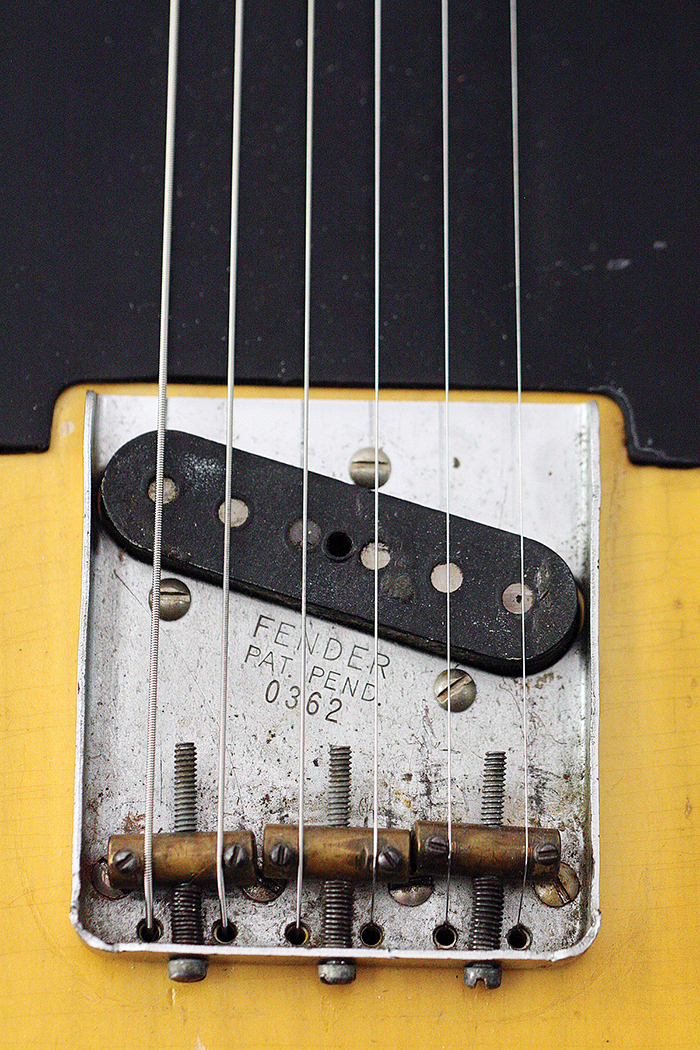 “I pointed out that photos from the era showed him holding a blackguard Telecaster – never an Esquire – but he was emphatic, saying, ‘I recorded “Okie Dokie Stomp” on a one-pickup Esquire!’”

After the taping, Brown signed and dated the back of the headstock.

Fast-forward 18 years to early 2009. Andrews, wanting to have the Esquire’s body refinished, reached out to J.W. Black, who had worked as a master builder in the Fender Custom Shop and used his considerable resources including photos of early Broadcasters and Esquires to give it a look Andrews calls “…nothing short of spectacular. Even Gatemouth would be proud of it!”

The guitar then spent nearly a decade on loan to the Rock and Roll Hall of Fame, where it was part of a display with Muddy Waters’ Telecaster and John Lee Hooker’s goldtop Les Paul. 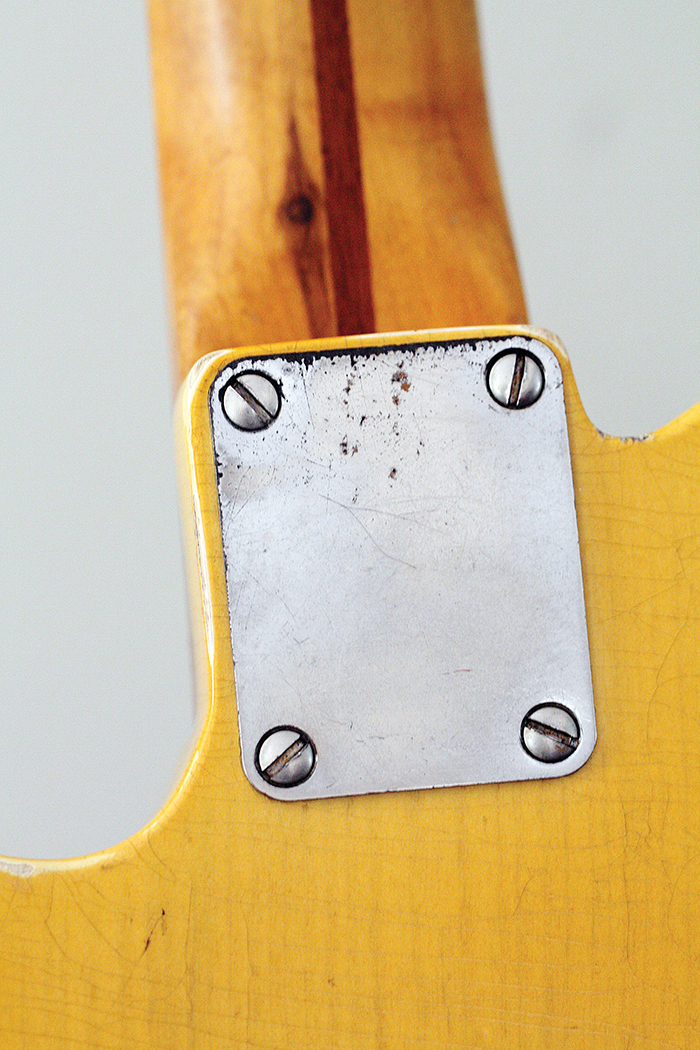 “It’s now back with me here in Austin, and I take it out every so often,” Andrews said. “One evening, I took it for Jimmie Vaughan to play at C-Boy’s Heart & Soul. It sounded fantastic, and Jimmie brought Jake up to play ‘Okie Dokie Stomp’ backed by his drummer and B-3 player. There’s video of that, and of Jimmie playing it, on YouTube.’’

Special thanks to Dan Forte and John Andrews. To read more about Clarence “Gatemouth” Brown, see the March ’15 installment of Wolf Marshall’s “Fretprints” column. Also, read our new interview with Jimmie Vaughan on page 18 in this issue. And, you can read an exclusive interview with Jake Andrews in the digital New Gear Yearbook, at www.vintageguitar.com/YEARBOOK2018.