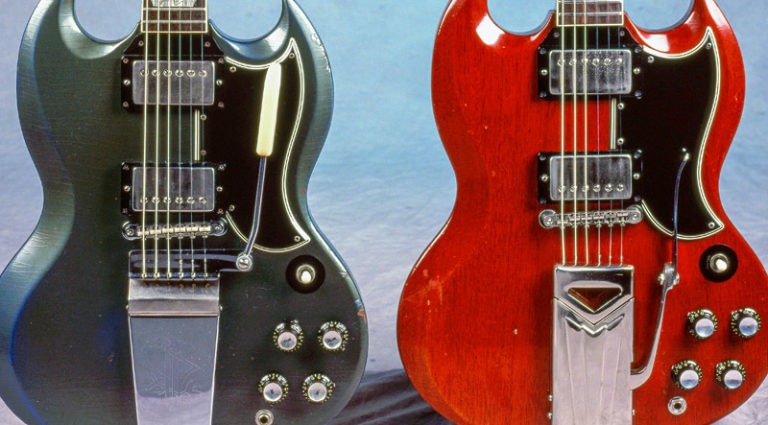 In 1961, Gibson replaced its Les Paul series with a new line of lightweight, ultrathin, all mahogany, double-cutaway solidbodies the SG (for solid guitar). Developed under the aegis of Ted McCarty and introduced as the “new Les Paul,” the SG heralded new directions and a new marketing emphasis for Gibson; trends exemplified only two years later with the introduction of the radical Firebird guitars and Thunderbird basses, available in custom colors. The SG Standard model, centerpiece of its line, is a Cherry Red guitar, and early-’60s examples with factory finishes in other colors are not very common. Original ’61/’62 Les Paul Standard model SGs (LP/SGs) in colors other than red are even more rare.

These new Les Pauls were designed and introduced, according to Les Paul, without his consultation or knowledge. Sometime in ’62, when his agreement with Gibson expired, he removed his endorsement and the line was renamed SG – its simple factory designation. No changes were made in the actual instruments, with one main exception: the ’61/’62 Les Paul Standard’s identifying, patented sideways Vibrato was replaced by Gibson’s new Vibrola on the new SG Standard.

There are, of course, anomalies and transitional exceptions; ’62 LP/SGs with Vibrolas and ’62 SG Standards with sideways vibratos. In any case, most early SG players replaced their vibratos – notorious Rube Goldberg mechanical springs-and-levers contraptions – with stop tailpieces.

The SG became one of Gibson’s most successful solidbodies and was the rock guitar of the late ’60s. It was especially popular with West Coast groups like The Doors, Quicksilver Messenger Service (John Cippolina was the master of the sideways vibrato), The Grateful Dead (Jerry Garcia), Big Brother & The Holding Company (two SGs and an EB-3) and Country Joe & The Fish (Barry Melton). But the British loved it, too; an LP/SG was Clapton’s guitar of choice with Cream, Townshend abused one when The Who played Woodstock, and we must not forget Deep Purple and Black Sabbath. Other manufacturers, including Guild, Hagstrom and Yamaha, introduced SG-style guitars, as well.

The ’61 LP/SG Standard had a most distinctive neck profile – extremely thin with a very wide fingerboard – that Gibson fattened up in ’62 because the shape was one of Les Paul’s (and other players’) main gripes. These necks were prone to breakage at the headstock, and often had problems at the heel, where it joined the body at the 22nd (and last) fret, making original, unrepaired examples hard to find.
It also had Patent Applied For humbuckers. Mixtures of PAFs and Patent Number pickups are common in ’62 models, and later Standards had two patent number humbuckers, although an occasional PAF has turned up in ’63 models.

These guitars share many of the same features and trimmings as their Les Paul Standard predecessors, including Kluson Deluxe tuning machines, nickel-plated hardware, and bound rosewood fingerboards with trapezoidal inlays. The headstock veneer contains a crown (also called “Holly”) pattern inlay, plus a bell-shaped truss rod cover that says “Les Paul,” instead of the “Les Paul Model” decal found on earlier Standards – although the SG-bodied Les Paul Standard in the ’62 Gibson catalog shows the old-style decal and a plain truss cover (where is that guitar?).

Tom Wheeler calls this white finish, circa ’61, “extremely rare,” illustrating the same instrument in his American Guitars. Normally, only SG-body Les Paul Customs came in white (with a white pickguard) as standard finish, with gold-plated hardware and three humbuckers. This white Standard was factory-ordered by someone who wanted something that would stand out, but without all the fancy trappings of a Custom, and the contrasting black pickguard shows off its bat wing shape.

Another extremely rare and tasteful example of a factory finish ’61 LP/SG is this black one with a contrasting white scratchplate originally meant for a three-pickup Custom. Black is a not-uncommon color for SGs, being preferred by Tony Iommi and Angus Young, for instance, and is a popular color for refins, as it masks neck repairs so well. But black SGs usually have black pickguards. 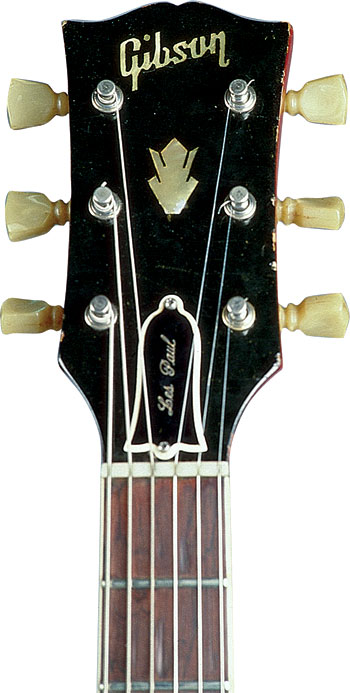 In ’63, Gibson unveiled its new Firebird line, available in 10 DuPont Duco Custom Color finishes for an additional $15 (no black, though). This was a direct response to competition from Fender and the custom color craze of the times. These fancy finishes were offered for Firebirds and Thunderbird basses only, but a number of other models were special-ordered by stores and individuals in Custom Colors, and for some reason, Pelham Blue seems to be the most common.

The non-LP/SG here is from ’65, and illustrates not only some of the changes made starting in ’62, and characteristics that personify the classic early-’60s Standard. Most apparent is the new Gibson Vibrola, with its unadorned trapezoidal baseplate and large plastic-tipped arm. Not a great trem, with a very basic design that just tightens or relaxes string tension from the tailpiece, the Vibrola was easier and much cheaper to manufacture and install than the LP/SGs sideways nightmare. Hardware is chrome, and the neck profile is similar to other Gibson six-strings of the period – a normal width and not as much “meat” as transitional SG necks from ’62/’63.

Sometime in ’66, Gibson redesigned the SG line, changing the neckset and heel arrangement, and enlarging the pickguard to cover almost the entire face of the body – surrounding the pickups, which no longer needed mounting rings. This was done for production reasons – ease of wiring and assembly, primarily. A large cavity under the guard allowed them to use the same body blanks for all models and pickup configurations, including the inexpensive Melody Maker, which had been given the SG shape in ’65 and came in two standard finishes, Fire Engine Red and (strangely enough) Pelham Blue.
The character of the instruments had changed, and nothing compares to the sound and feel of the first LP/SGs, with their PAFs and superfast necks. For collectors, these guitars may be relative bargains, as they represent a fertile period of growth and innovation in Gibson’s history. Buyers would do well to beware, though, as many examples are “restorations.” PAFs had a way of disappearing from LP/SGs in the ’70s for use in goldtop-to-Standard conversions, and those “Les Paul” truss rod covers migrate pretty easily.

But what other original LP Standards can be had for 1/10 the price of a ‘Burst?

This article originally appeared in VG Classic‘s #6 March 1996 issue. All copyrights are by the author and Vintage Guitar magazine. Unauthorized replication or use is strictly prohibited.