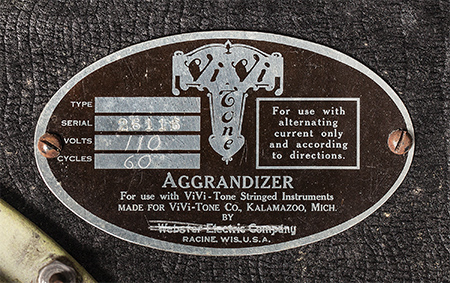 “Aggrandize: v.tr. 1. increase the power, rank, or wealth 2. cause to appear greater than is the case.” So says the Oxford English Dictionary, and as such, it’s a pretty bold name to give an amplifier; apropos, perhaps, if you’re one of three or four contenders striving for dominance at the birth of the amplification of the guitar.

Had it been able to “increase the power” just a little more successfully, ViVi-Tone may have remained a viable brand. But it takes two to tango, and the Aggrandizer came to the dance with a partner that was doomed to obscurity.

We have very distinct, discrete notions of what “the electric guitar” and “the amplifier” are today, and they exist as very mix-and-match concepts for most guitarists of the 21st century. Think back to the chicken-and-egg status of these interdependent forms at the birth of the amplified instrument, though, and the existence of one is utterly tied to that of the other. The notion of making the guitar louder was big stuff with guitar-inclined inventors in the late 1920s and early ’30s, but the real question was, “Make it louder with what?” The technology required to transmit an electronic signal had existed for several years (thanks to Edison, Marconi, and others), but vacuum tubes with enough stability for successful amplification weren’t developed until 1926, and it took some time for the technology to adequately ramp up to commercial use. They had the will, they had the way, but one great idea was useless without the full implementation of the other.

Meanwhile, musician and instrument designer Lloyd Loar was moving his thinking from acoustic to electric. Often hailed as the genius of the archtop guitar for his work at Gibson in the early 1920s, a closer look reveals that Loar’s elegant L-5 – while introducing innovations like the f-shaped sound hole, refined and “tuned” archtop construction, and a more-playable extended neck – was outmoded just a decade after his departure from the company in 1924. Upon further examination, one could even conclude that a considerable number of Loar’s inventions were dead ends. Not long after leaving Gibson (where, as some stories have it, his musician’s ego conflicted with the desires of his superiors), Loar pursued the development of amplified instruments… and while the most successful path forward for the electric guitar was but a few years away (sparked, in large part, by George Beauchamp’s development of a successful magnetic pickup at Electro-String/Rickenbacker), the “genius” Loar’s designs would be far more oddball than anything found in his acoustic-archtop designs.

Viewed from nearly 80 years down the road, the efforts of Loar and ViVi-Tone partner Lewis Williams (a former Gibson partner and sales manager) appear to follow a quest to amplify the acoustic guitar rather than simply electrify the guitar. But, who would have thought anyone would want otherwise?

You’ll see photos of ViVi-Tone instruments with piezo-like bridges, or ornate old-fashioned guitars with odd slide-out drawers carrying cumbersome pickup mechanisms. The instruments themselves weren’t particularly noteworthy from an acoustic standpoint, and their means of electrification was quickly rendered archaic. As such, these ViVi-Tone efforts would not prove to be the way forward – while the developments taking place at Electro-String/Rickenbacker and Gibson would – and, ultimately, Loar would be seen as an “also ran,” with little if any of his inventions’ DNA remaining evident in the electric guitar as we know it today.

But we’re here to talk about amplifiers, and one of the oldest we’ve seen in these pages – a late-1935/early-’36 ViVi-Tone Aggrandizer. As we all know today, though, what really makes any guitar “electric” is the amplifier, and Loar didn’t make amplifiers – not for commercial production, at least. According to collector, historian, and fellow VG contributor Lynn Wheelwright, who owns this particular Aggrandizer, ViVi-Tone came into being in Kalamazoo in August of 1932 – nearly a year earlier than many accounts claim – and from shortly after that time until the company’s demise in ’38, the amplifiers that accompanied its guitars and mandolins were actually made by the Webster Electric Company of Racine, Wisconsin. A big name in the early days of commercial tube amplification, Webster produced radios, telephone-amplification products, wire, and tape recorders, and public-address systems, its compact early renditions of the latter being near-identical to this ViVi-Tone badged guitar amp. Circa 1935, the Aggrandizer sold for $125, which was a big bite in the day, considering the average annual salary in the U.S. for the same year was $1,500 and the average car cost $580. This particular Aggrandizer was brought to our attention by Susan Huff when it was acquired by Diamond Gem Lending Company, a pawn shop in Portsmouth, Ohio. It was subsequently sold to Wheelwright.

Though ViVi-Tone shipped several hundreds of electric instruments, all of which would have needed amplifiers – and amps and guitars were generally sold as codependent sets at the time – only a handful of ViVi-Tone amps are known to exist today. A ViVi-Tone Type 2 not greatly dissimilar to this Aggrandizer appears on page 358 of Tom Wheeler’s 1992 tome American Guitars, alongside one of Loar’s guitars, and a few are known to be in private collections. “I have logged a total of 46, counting all types known,” Wheelwright tells us. Beyond that, well, check your barns, basements, attics and tool sheds.

The scarcity of these things makes the stunningly original condition of this Aggrandizer all the more impressive. The circuit is very much what we’ve come to expect from amps of its vintage – a simple “spaghetti junction” affair with relatively few components, wired point to point – but it uses some of the newest tube designs available at the time, including 6F5 and 6C5 preamp tubes, a pair of dual-triode 6B5s in the output, and an 80 rectifier. Dual inputs feed a single control (for volume) that goes from 0 to 9. Wheelwright says it needs serious tech time before he fires it up, but when that day arrives, he expects the authentic sound of yesteryear. Which is to say, not a ton of clarity or fidelity, and not much volume by today’s standards… but something that would surely have sounded like major aggrandizement next to any of the purely acoustic guitars of its day.