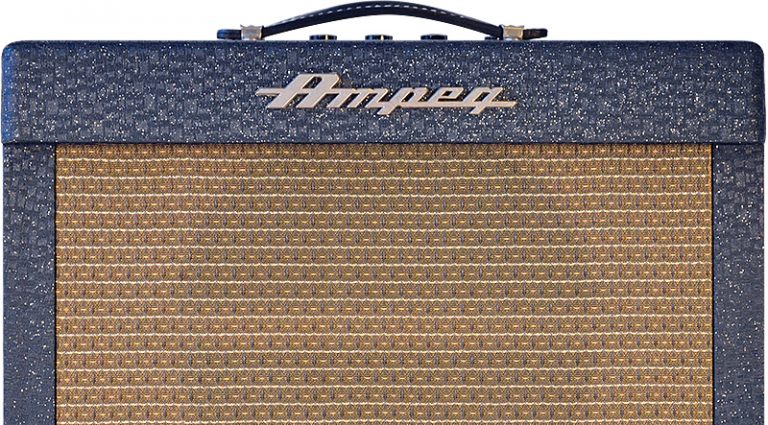 Ampeg is frequently credited for being not only one of the first makers to put reverb in its amplifiers, but also for producing what was one of the consistently best-sounding reverbs of the 1960s.

If we accept that the Ampeg reverb circuit is a noteworthy stop on any tour of tube-amp history, this is one of the central displays in that room – an early-’61 Jet that served as a prototype for the company’s then-new delay effect.

In their excellent book Ampeg: The Story Behind The Sound, Gregg Hopkins and Bill Moore say the Reverberocket was “quite possibly the first combo amp ever offered with onboard reverb,” and the first example saw the light of day at the NAMM show in July of ’61 (there’s evidence Premier had a reverb amp out before this time, but that doesn’t detract from our main point here).

The Jet under scrutiny here was built in April of ’61, and all indications are the add-on reverb chassis in the bottom of its cab was put together concurrently to its assembly – the Hammond spring-pan’s serial number also dating to April ’61 makes it, by all accounts, one of the “first of the first” of its type.

This unusual amp – which we might want to call the Jet-Reverb – is owned by VG reader Mac Lore, who came by it in the sort of lucky find of which dreams are made.

“I bought it in 1997 from an old ham-radio guy down the road in Riverton, Vermont,” he said. “It was upstairs in his carriage barn, and he thought it was a small PA with reverb. He’d acquired it at a ham swap meet in Connecticut 15 or 20 years before.”

To get it running right, Lore first took it to an amp tech who pulled all the original red and white Astron signal capacitors in the main chassis (other than the one connected to the Tone control) and replaced them with Sprague orange drops, a common over-reach of vintage tube-amp maintenance at the time. Oh well, he got it working. The original resistors and capacitors do exist in the reverb sub-chassis, however, other than two large filter caps that were added by a second tech to replace the dried-out originals. Otherwise, the add-on reverb is constructed entirely from factory-correct components and was clearly put together by someone who knew what they were doing – but it’s not an Ampeg-standard build in many ways. It has the look of something thrown together on the workbench, perhaps to test a new circuit. Purportedly, that’s exactly what it is.

In 1998, a second tech who worked on the amp for Lore, Geoff Brumbaugh, drew a schematic of the reverb sub-chassis while he had the amp in his shop. A short while later, Lore compared that diagram to the factory schematic of a first-edition Ampeg R-12-R Reverberocket from May of ’61, and found it identical other than a few minor component-value changes. At this point, Lore was figuring his find might be an amp that was modded by an Ampeg factory worker for their own use. Having sought out noted Ampeg collector Ray Pirotta to field further information, though, he was put straight through to the font of all knowledge on this subject – to learn that this was a far more significant creation.

“Ray Pirotta suggested I contact Jess Oliver (former Ampeg vice president, and designer of many of the company’s products) to see if he remembered the amp,” said Lore. “So, I sent photos to Jess, and in a phone conversation he identified it as the prototype for the Reverberocket. He sent me a letter stating this, but it was later destroyed in the flooding from Hurricane Irene on August, 2011 – I had 40 inches of water on my first floor! Jess had written it in pen and it was unreadable after getting wet.”

Oliver had died June 30 of that year, at the age of 85, so there was no way of obtaining a second letter.

Ultimately, the amp has been verified by enough Ampeg experts that we have no reason to doubt the veracity of its supposed prototype status, and the story simply adds up no matter you look at it. One thing Oliver couldn’t remember, however, was whether there were other reverb prototypes; we might speculate that, following the success of the add-on reverb chassis in testing, Ampeg would have prototyped a full one-chassis reverb model, but who’s to say?

“Jess also did not remember what happened to the prototype,” Lore added. “But, Everett Hull (Ampeg founder and president) would sometimes swipe Jess’ projects and sell them, once they he thought they’d served their purpose.”

Aside from the reverb, the Jet and the Reverberocket of 1961 were extremely similar amplifiers, and the former remained in the lineup as the more-affordable “dry” sibling even after the latter became a big seller. Rather than the Reverberocket’s three inputs – for Guitar, Accordion, and Mic (as seen in the 1962 model we featured in VG’s January ’13 issue) – the Jet has just two inputs, High and Low, though this amp’s reverb level potentiometer was installed in the second of those. The Jet also lacks the Reverberocket’s Intensity control in the tremolo section, with just the single knob for Speed and a preset intensity, but otherwise they are virtually the same. This prototype also includes a hum-balance control believed to have been added to the design by Oliver, and not seen on either the Jet or Reverberocket. These amps used the fat-sounding octal preamp tubes that few makers employed by the early ’60s, but which many guitarists love. A pair of 6SL7s cover preamp, tremolo, and phase-inverter duties in a simple (but rich-sounding) circuit. The PI is a split-phase type with a driver stage before it, feeding a pair of cathode-biased 6V6s with a negative-feedback loop to tighten it up, and a 5Y3 for rectification. Other than a few tweaks and reconfigurations, and the addition of tremolo and a negative-feedback loop, it’s all very much like a tweed Deluxe – as were so many amps of that day – and contains none of the freakish, oddball tubes that today give fits to some vintage-Ampeg players.

“The 6V6 Jet is a great amp,” says Lore. “Turned all the way up, it screams like Bluesbreaker-era Eric Clapton. The reverb adjusts from subtle to gigantic.” However you slice it, it’s a fascinating subject, and likely the precursor to a legendary lineage of Ampeg reverb amps.

The Birth of the Gretsch Duo Jet