Given the unwavering popularity of the humbucker pickup, the constant injection of new builders, and the popuarlity of our 1998 comparison feature, we thought we’d note the anniversary of the design of the humbucker with another “shoot-out.”

We started our test with the pickups in the 1956 Gibson Les Paul Model before beginning the arduous swapping of pickups into our test mule Les Paul Standard with Brazilian rosewood fingerboard. All pickups were tested without covers and in the bridge position with the same set of SIT .010-.046 strings, chosen for their upper harmonic clarity. We removed the covers so the differences would be more apparent, because nickel covers reduce treble response and output, while adding focus.

Our test amp is a Laney AOR 50 from the mid 1980s with a 12AX7/EL34 tube complement. We disconnected the negative-feedback tap from the output transformer and re-capped it with Orange Drops. This reduced compression in the signal chain and added a degree of “tweed-ness.”

We set the amp to slightly favor high-end response, which favors the true tone of the pickup. The speaker is a Celestion G12-85 from a Peavey Butcher, in a homemade cabinet. Our pick was a Fender Heavy, which also tends to the bright side.

To make sure our thoughts and hearing were good, we recorded each pickup to its own track in ProTools, using the same amp settings, a Shure SM-57, and the same mic preamp (Digi001 interface). We recorded over the course of a few hours.

All of these units are very good – there truly are no bad choices. But there is some nice variety, and all do something (or even a few things) really well.

We lead with our impressions of the hand-wound PAFs in the ’55 Les Paul test guitar.


Humbucker Test Guitar PAF
Ohms: 7.2K
This pickup is bright and transparent compared to its latter-day copies. It has some of the single-coil sound similar to the Wolfetone and Gibson Burstbucker, with a bit less focus. It does compress brightly, more like the ’57 Classic, with nice texture, and some fuzziness that’s drowned out by the sound of the pick attack. It’s a little quacky. 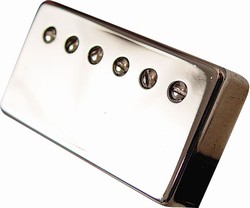 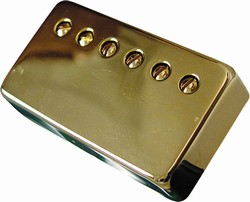 
Duncan Seth Lover
Ohms: 8.07K
A medium-/low-output pickup with nice tone and texture. Mids are fairly complex. While the notes have a certain graininess when the pickup compresses, it never loses focus. It has a little quack, but it’s not shrill. It has less bass than some of the others, but sounds natural and musical.
Bottom Line: Very clean and smooth, but not sterile. 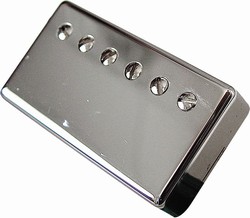 
Gibson 57 Classic
Ohms: 7.86K
Low-/medium-output pickup with crisp character. It’s the most quacky of the group, but has very nice texture – bright, but very musical. Played hard, the attack washes out the tone of the string, which is an authentic PAF trait. The character and texture make its brightness forgivable. A little fuzzy, but in a good, musical way.
Bottom Line: Bright and spanky yet musical. 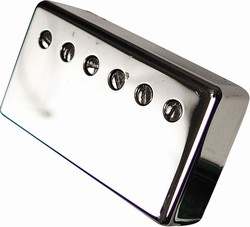 
Gibson Burst-bucker Classic #2
Ohms: 8.17K
A low-/medium-output pickup with lots of character. A little bright, but with more of single-coil texture. Lots of harmonics, and compresses well when played hard. Another one that swirls around when a left-hand vibrato is used. The pickup has some musical fuzziness, but a lot of transparency. Has an old-fashioned, jingly musical tone with less bass then some, but a very musical texture.
Bottom Line: Complex, musical, fuzzy, and bright. 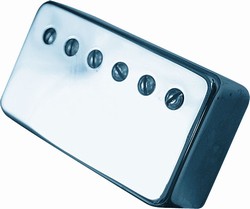 
Lindy Fralin Vintage Hot
Ohms: 9.0K
This is a medium-/high-output pickup. Fat and loud, but not messy. Has almost no quack and retains mid peak when pushed hard. Has good bass and slightly reduced treble. Not excessively dark, and mids are great. Has a really cool texture – fuzzy without being bright or losing bass. Texture is complex and the pickup is responsive. Compresses very well and harmonics are swirly and thick. Harmonic overtones are distinct, and do not wash out each other.
Bottom Line: Rocking, big, fat, and a little swirly. 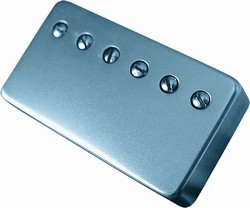 
Harmonic Design V+ Classic
Ohms: 8.95K
A medium-output PAF (though it breaks form with its brass cover) that’s voiced very well. Well-balanced, tonally and musically. Upper harmonics are there, but never saturate the pickup. When compressing, it retains tonal balance and transparency. Has subtle fuzz, which is always musical in texture and can be removed by dialing in a saturation point. Also has plenty of bass without sacrificing clarity in the high-end. Clean and dark.
Bottom Line: Rocking without losing focus, with adjustable compression and texture. 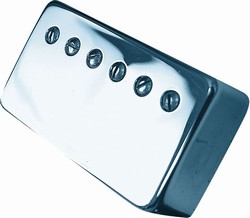 
Lollar Imperial
Ohms: 8.19K
A low-/medium-output pickup, it’s clear and bright with some softness in attack. Has good transparency, with a little quack. Compresses when played hard and rolls off some treble. Has an overall smooth texture without being fuzzy. Tone is smooth and balanced. Has a very musical fuzziness that softens the tone when played hard. Very natural, non-metallic sound.
Bottom Line: Clean, balanced with a little softness. 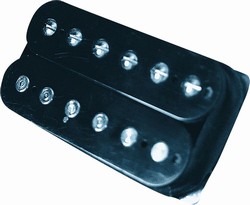 
Razor Tribute Vintage Plus
Ohms: 10.7K
A medium-/high-output pickup, it’s punchy and fat, with minor quack when played hard. Has good (but not muddy) bass and a fuzzy mid peak.
Bottom Line: Really rocking, with a darker resonance, low price. 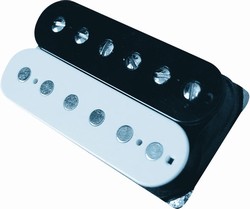 
Wolfetone
Ohms: 8.20K
Low-/medium-output with nice texture and softness. The most compressed/fuzziest of the group, it has a nice jingle, but doesn’t quack much and when it does it’s fairly musical. Highs are rolled off, but it isn’t bassy. Good transparency even through the abundant overtones.
Bottom Line: Squishy and warm, not too loud. A soft, pleasantly funky pickup with lots of personality.
PAF Shootout Glossary
Output – How much sound does the pickup produce.
Sparkle – Upper trebles.
Focus – Purity of musical tone.
Grain – Distortion of the true musical tone.
Harmonics – The higher frequencies which make up tone along with the fundamental.
Compressed – When the pickups output is maximum and the peaks get cut off.
Transparency – Absence of masking by certain frequencies.
Texture – The overall non-musical component to tone.
Quack – When trebles mask the other tones when the string is picked.
Squish – When harmonic’s volume ratios change as note sustains.
Sterile – Perfect to a fault.
Spanky – Attack that quacks as a percussive effect.
Musical – Enjoyable quality of sound.
For more information on the Humbucker, check out 50 Years of the Humbucker.


This article originally appeared in VG‘s March 2005 issue. All copyrights are by the author and Vintage Guitar magazine. Unauthorized replication or use is strictly prohibited.