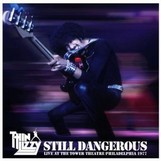 Thin Lizzy was one of the most badass guitar bands of the ’70s. After a series of lineup changes early in the decade, the Irish-rooted group finally settled on the axe duo of American Scott Gorham and Scotland’s Brian Robertson, a twosome who created memorable harmony lines and scorching solos galore.

Still Dangerous captures Lizzy during its 1976-’79 peak, a fertile period when frontman/bassist Phil Lynott was writing one hard rock gem after another until heroin muddled his muse in the ’80s (and ultimately cost him his life).

Many of the Lizzy classics are here, from “The Boys are Back in Town” to “Jailbreak,” along with some rarer material. This concert was recorded in October, 1977, just before the release of the excellent Bad Reputation studio album, and has some classics from that LP. First off is the rarely heard “Soldier of Fortune,” a rocker with a sultry solo from Gorham, a player famed for coaxing deeply melodic leads from his cherry sunburst Les Paul Deluxe. Even more exciting is the ultra-rare “Opium Trail,” which sports a pair of blistering, wah-boosted leads from Robertson. His wah frenzies continue on “Don’t Believe a Word,” which packs a massive hard-rock punch in its brief two and a half minutes. It’s not often that hard rock is this economical.

Closing out the set is “Me and the Boys,” a boozy crowd-pleaser that never made it onto any Lizzy album. It’s a fitting way to close this excellent live set and makes a fine companion piece for their 1978 classic, Live and Dangerous. When it comes to Thin Lizzy and guitars, “dangerous” seems to be the only word that fits.