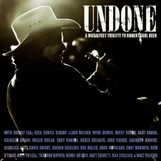 Texas-born singer/songwriter Robert Earl Keen has influenced a passel of younger performers during his 30-year career. On Undone, we have an opportunity to hear how these young’uns interpret his material.

Identifying standouts among the 27 selections is a daunting task, but standouts include Reckless Kelly’s rendition of “Think It Over One Time,” Walt Wilkins’ “Paint The Town Beige,” and Matt Powell’s “Travelin’ Light.” You’ll be hard-pressed to find a selection that doesn’t measure up, and most listeners will bond with multiple favorites.

Hearing Keen perform his own songs is always a treat. For hardcore fans he includes a brand-new and previously unrecorded “Goodnight Cleveland.”

The final selection on this double CD set, a 12-minute live rendition of “The Road Goes On Forever,” is by itself worth the price of admission. Cody Canada’s jivey scat-sung banjo-guitar solo takes the performance to a new level of improvisational splendor.

A portion of the proceeds from Undone go to the Center for Texas Music History. Judging by the quality of these live performances, history is already being made.