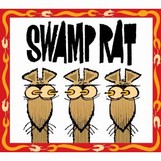 The cartoon rats on its cover are a humorous representation of the three guys in this band – Dan Cohen (guitar, banjo, vocals), James Cook (bass and vocals), and Derek Mixon (drums), and the tracks include guests like mandolin giant Sam Bush, singer/guitarist, Steve Wariner, vocalist Tracy Byrd, and music veteran Johnny Neel on vocals and keyboards.

The music is essentially country, but still hard to describe. The instrumental opener “Nose Whistlin’ (In a Tizzy)” sounds like the Buckaroos before Cohen enters with wild, distorted guitar right out of Joe Walsh-era James Gang. And Cook handles the whistling…

“Back on the Farm” gives Wariner a chance to shine on vocals and a jazzy solo followed by fine fiddle. Cohen gets most of the solos, and he’s certainly a quirky player; at home on the country material, he brings his own twists like the chicken pickin’ mixed backward-tracked soloing on “Twitchy,” or the melody and gorgeous solo on “Lullaby”. “Something Goofy” mixes country and jazz with a killer solo, followed closely by a pedal steel turn by Brook Langton.

Most of the tracks are instrumentals, while guests handle lead vocals. If you like great playing, mixed with more than a little humor, grab this.

Big Joe and the Dynaflows