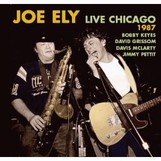 Texas’ rockin’est troubadour has a reputation for featuring great guitarists – from the late Jesse Taylor in his original lineup to Mitch Watkins (when Joe transformed the fusion band Passenger into his least country, most high-tech combo) to his work with flamenco guitarist Teye – to the point that Austinites have been known to get into heated arguments over which band and which guitarist was the best.

Well, they were all good, but this release (on Ely’s own label) is especially welcome, because it features the band when it included not only a young David Grissom on guitar but rock sax legend Bobby Keyes. That same lineup was responsible for one of Joe’s best-ever albums, Lord Of The Highway, brand-new at the time of this gig, but by 1990, when Ely cut Live At Liberty Lunch, Keyes was gone – no doubt off playing with his sometimes employers, the Rolling Stones.
Liberty Lunch gave Grissom fans a generous fix (as on the 12-minute “Letter To L.A.”), but was missing the give-and-take that would push him (and Keyes) to greater heights on virtually a nightly basis.

This much-bootlegged Chicago performance comes from a single night, presented with no edits or overdubs – most likely at Park West (although no one’s quite sure). Grissom and the rhythm section of bassist Jimmy Pettit and drummer Davis McLarty (who, with guitarist David Holt, would gig on off nights as the Booze Weasels) were tight and muscular – the type of band that approached playing live like a racehorse busting out of the gate. Grissom launches into the stratosphere with an ease and consistency that’s remarkable – especially on “Don’t Put A Lock On My Heart” and on “L.A.,” where he’s preceded by a Keyes solo that’s the sax equivalent of saying “Follow that!” Just when you think he’s finished his response to Keyes’ call, he pauses, then comes up for air with a final, staggering burst.

It’s almost cruel to say, “If you never saw this band….” – because that chance has passed. But thankfully, later converts and career-fans can experience together this snapshot of one of the best bands to ever incinerate a stage.