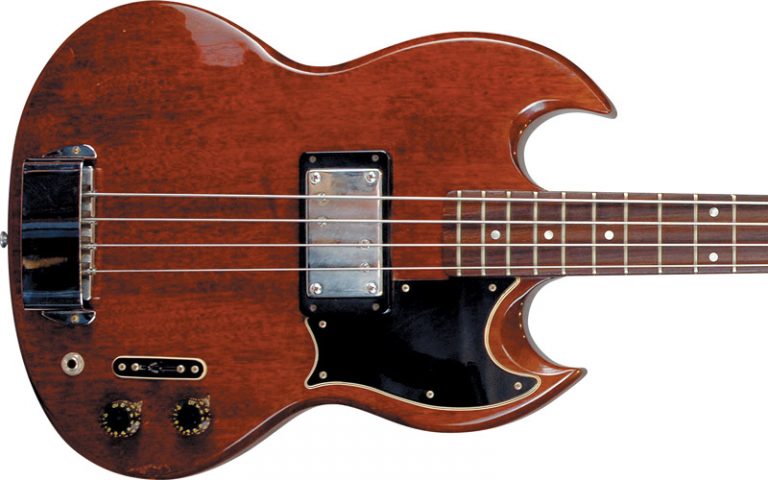 The antennae of many guitar collectors/enthusiasts pop up when they encounter a Gibson-made instrument bearing a six-digit serial number with “Made In The USA” embossed on the back of its headstock.

Gibson used the six-digit/Made In The USA serial number system from 1970 through a portion of 1975 – the half-decade considered one of the company’s worst eras in terms of design innovation and manufacturing quality. Accordingly, guitar aficionados typically examine an instrument from the period more closely. True, Gibson introduced some unique instruments in the first half of the ’70s, and while some of its innovations may have had a bit of merit back then, they haven’t translated to collectibility.

At first glance, the Gibson EB-4L, introduced in 1972, could have been mistaken for an EB-0L, which was a long-scale version of Gibson’s primary production bass. The single-pickup EB-0 was introduced in 1959 as a short-scale (301/2″) instrument. In 1961, its slab-type double-cutaway body (similar to late-’50s Les Paul Juniors and Specials) morphed into a pointed, SG-shaped instrument and was joined by a two-pickup variant, the EB-3.

Both models underwent subsequent changes, including a short-lived conversion to a slotted headstock from 1969 to ’72. Long-scale (341/2″) variants of the EB-0 and the EB-3 were also available in ’69, designated by an “L” at the end of the model numbers.

Around the time the EB-0 and EB-3 (and their long-scale siblings) returned to a solid headstock in the early ’70s, the large humbucking pickup near the neck on both models was moved back about two inches. That meant the two pickups on the EB-3 were, of course, closer to each other. The EB-3L was discontinued in 1972, perhaps to make way for the EB-4L. But the EB-0L survived until ’79.

Reaction to the EB-4L might have been “big deal,” as it looked similar to other Gibson basses, right down to a pickup located in the middle of the body.

The EB-4L’s all-mahogany construction was similar to that of the EB-0 and EB-3, and like its progenitors, the EB-4L was only available in Cherry and Walnut finishes through most of its life. Unfortunately, it sported the “chunkier” SG-shaped body of the early ’70s (as did other guitars and basses), and its neck felt beefy, exemplifying the quality-control issues in instruments of the period.

The revived solid headstock was accompanied by the return of the pearloid “crown” headstock inlay, but some examples from the era are altogether missing a headstock inlay (as is the EB-4L). What’s more, the Gibson script logo isn’t pearl; its gold silkscreen logo on its elongated head only adds to the EB-4L’s lack of aesthetic inspiration.

The neck joined the body at the 17th fret (note the rounded end of the fretboard), and the unbound rosewood fingerboard has dot markers.

The silhouette of the multi-layered pickguard was, for some reason, truncated with a rounded notch (when it didn’t need to be), as was the case on early-’70s EB-0s and EB-3s.

What Gibson was apparently trying to accomplish with the EB-4L was an incorporation of more professional sonic options. The pickup, which was designed by Bill Lawrence, seems to be the same size as original Gibson bass humbuckers, but has an offset “two-plus-two” polepiece configuration. There’s also a three-position toggle switch that works coil-tap configurations and can evoke various tones. It’s mounted in a tiny oval-shaped plate made from the same material as the pickguard.

The bridge (under the chrome cover) has individual saddles for intonation, and some EB-4L bridges were equipped with a mute that was activated by pulling a sliding tab.

Any full-scale version of an instrument that’s also available as a short-scale should resonate better, and should have better sustain, particularly if said full-scale variant has a set neck. Such would have been the idea behind the EB-0L, EB-3L, and EB-4L, with extra sonic capabilities added to the last model. Simple as that, but not successful. And Gibson would go on to make other uninspiring and unsuccessful basses (Rippers, RDs, etc.) later in the ’70s.

The EB-4L was on Gibson’s price lists from 1972 to ’75. Last examples (including one in a black finish) were reportedly shipped in ’79.

An EB-4L might make an excellent utility instrument for someone who wants to gig with a full-scale SG-shaped instrument. But be forewarned – it won’t have the slim, sleek profile and feel of a ’60s EB-0 or EB-3. It may actually sound better due to the 341/2″ scale, but it’ll feel a lot beefier. It’s a definitive example of something that didn’t work for Gibson when it was new, and calls into question the collectability of something just because it might be rare or was short-lived.

The Thunderbird was Gibson’s first bass with a full/long scale, but the EB-4L has the distinction of being the first SG-shaped instrument introduced as a full-scale instrument… for whatever that’s worth.