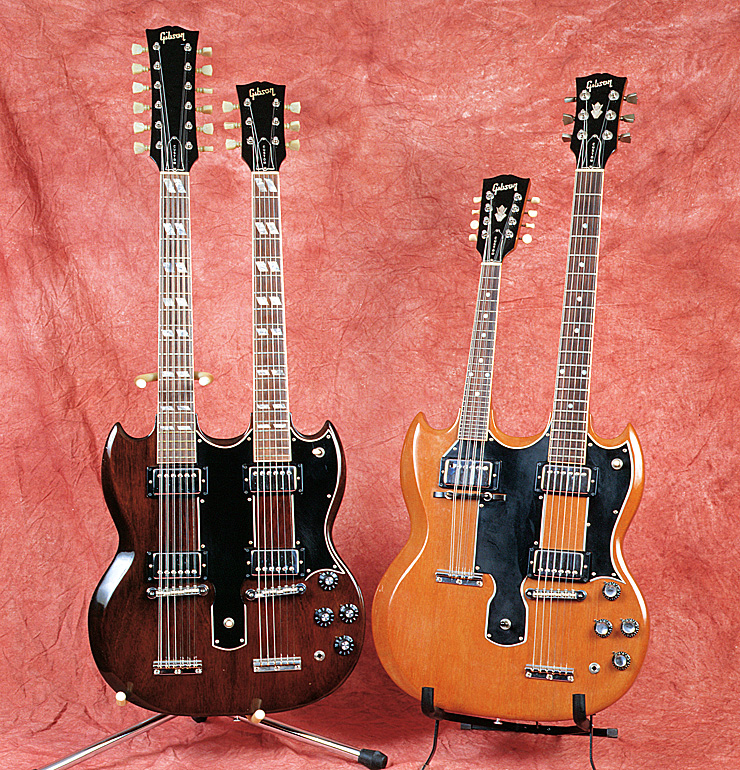 It’s hard not to associate doubleneck electric guitars with images of Led Zeppelin’s Jimmy Page or fusion guru Mahavishnu John McLaughlin in the ’70s; however, the fact is that by the time the Big Js were stopping shows with these multi-headed beasts, they were already relics of the past.

Doubleneck Spanish guitars got their first widespread exposure thanks to the mid-’50s TV high-jinks of country ace Joe Maphis and his young sidekick, Larry Collins, who would simultaneously paly each neck of a doubleneck guitar/octave neck custom made by Semie Moseley. The idea of multiple necks was not new, of course, two or three having been a mainstay of Hawaiian guitars for some time, but two necks on a Spanish has the kind of extra drama that never fails to bring down a house.

Gibson began making doublenecks in 1958. Because of their expense, they were available only on a custom-only basis. The first were the EDS-1275 (with six-and 12-string necks) and the EMS-1235 (six-string and mandolin). Both were hollowbodies with carved spruce tops and no sound holes. In ’62, Gibson changed the design to the now-familiar solidbody – a beveled-edge mahogany SG stretched sideways to make room for the second neck. The bass and six-string EBSF-1250 was added at the same time.

Gibson doublenecks were offered until ’68, which makes the pair of rare beauties shown here final representatives of the era. Since all were custom-ordered, you find variety in appointments and neck configuration, but certain elements pertain; all had the stretched-SG bodies, the six-string neck on the bottom, bound rosewood fingerboards, humbucking pickups, stop tailpieces, and one set of two of Volume and two Tone controls that governed both necks.

The EDS-1275 is very similar, here shown in the natural mahogany finish often referred to as “walnut.” The mandolin neck has only one humbucker, due to the much shorter string scale. The headstock ornament and dot inlays are not typical, but then, what is on custom-made guitars?

Thanks to renewed interest generated by folks like Page and McLaughlin, Gibson reintroduced the doubleneck in 1977, and you can still buy one new, if you, too, are searching for a unique stairway to heaven.

This article originally appeared in VG Classics #01. All copyrights are by the author and Vintage Guitar magazine. Unauthorized replication or use is strictly prohibited.