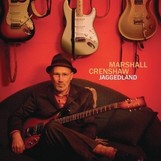 All of the hats Crenshaw wears so well – singer, guitarist, composer, producer – come together in full force on “Right On Time,” his latest CD’s opening track. His vocal is equal parts melodicism and desperation; his guitar solo blasts into a fierce flurry of notes before segueing into a worked-out tag, doubled with six-string bass; and he chose his collaborators like a coach picking an all-star team – including Greg Leisz’ eerie steel, vibraphone from studio legend Emil Richards, and everyone’s favorite drummer, Jim Keltner.

There’s an immediacy to the dozen originals here, so it’s not surprising that several were captured in a single take. But somehow, that energy carries over to cuts where Crenshaw served as an overdubbed one-man-band (a tight little rocker titled “Gasoline Baby”) and tunes utilizing strings (or, as they’re credited, “The Dying Tremolos”), like the cinematic title track.

Maybe because he’s never excessive (and likely because of his other formidable talents), Crenshaw is invariably underrated as a guitarist. But it’s hard to imagine any studio ace matching his concise solo on “Never Coming Down,” which starts as a country waltz, then crosses over to Abbey Road territory. With the exception of Leisz, the only other guitarist lending a hand is the MC5’s Wayne Kramer; that’s his Les Paul crunch on “Stormy River.”

It’s been a while since Crenshaw’s last CD, and with an album this strong, it’s tempting to say it was worth the wait. But when you realize that What’s In The Bag? was six years ago (meaning that would project his next release into 2015), that’s too many years to suffer through a sea of mediocrity waiting for the next gem. Strike while the iron is hot, Marshall, and get started on another masterpiece.