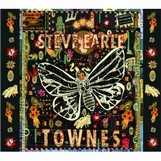 Of his mentor, Townes Van Zandt, Steve Earle has said he was “a real good teacher and a real bad role model.” Seems Earle got a good dose of both. With his new album, Townes, Earle pays homage to each side of the singer/songwriter, and the man.

It should come as no surprise that while returning to his own roots, Earle has also cut one of his rootsiest discs ever. But his growl and lowdown arrangements still catch you unaware. You can almost hear the dust on his boots.

Earle has collected a phenomenal backing band of guest musicians with Dobro, mandolin, fiddle, electric guitars, drums, and much more. Yet the band never overpowers the core beauty of the tunes. This is country music riding a deep groove.

Earle himself adds guitar, mandola, harmonica, harmonium, and percussion. And he sings these songs like he means every word. Earle’s son, musician Justin Townes Earle (catch that middle name), also appears alongside his father.

There’s no one more apt to record a tribute album to Van Zandt, and this one is a stunner.