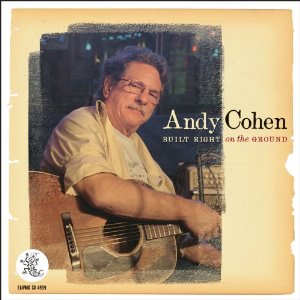 In his liner notes, William Lee Ellis (a formidable folk-blues performer in his own right) calls Cohen “the bestkept secret in folk music.” Indeed, two or three songs into this collection should be enough to send the uninitiated on multiple internet searches.

Among his inf luences, Cohen lists Blind Lemon Jefferson, Leadbelly, Big Bill Broonzy, Skip James, Bukka White, Rev. Robert Wilkins, Brownie McGhee, and, most profoundly, Rev. Gary Davis. In case you hadn’t guessed, he’s an accomplished fingerpicker. He is also a collector of songs – country, ragtime, boogie-woogie, and a lot of blues – nearly all of them old. For instance, “Temptation Rag” dates from 1909. But Cohen’s unhurried rendition has a classical feel, as opposed to Sidney Bechet’s raucous treatment or Benny Goodman’s speedy version.

The 64-year-old was exposed to Dixieland via his dad’s record collection, but Boston, where he grew up, was a hotbed of the Folk Boom when he was in his mid teens.

This set contains only one Cohen original, “Jim Dickinson Stomp,” dedicated to the late pianist and producer from Memphis, where Cohen now makes his home. For the instrumental, he broke out his 1905 dolceola – a small keyboard hybrid that has keys that strike clusters of zither-type chords on the left side and a miniature run of tiny piano keys on the right. (Cohen’s catalog includes one album devoted to the instrument, as well as the aptly titled Ridiculous Instrumentals on guitar and an album of Rev. Gary Davis material.)

Cohen switches effortlessly from Broonzy’s dead-thumb style on “Mopper’s Blues” to alternating bass a la John Hurt on the Teddy Darby title track and two Memphis Minnie compositions. “Revivalist” would not be an inaccurate term to describe him, but there’s nothing academic in the way he fills decades-old music with vitality.