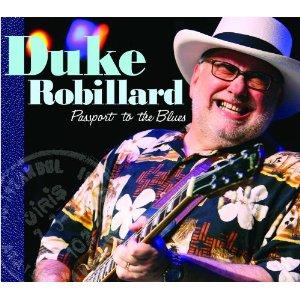 One of the busiest players around today, Duke takes a break from touring, producing, and recording jazz, jumpswing, and bop to crank out his most uncompromising blues set in 20 years.

Twelve original songs and a cover offer gritty guitar, gravelly vocals, and grinding rhythm. “Workin’ Hard for my Uncle” is Robillard’s ode to the taxman, and hits a little close to home. The disc closer, “Bradford Boogie,” reminds us that Robillard is a master at weaving inspired guitar solos that keep going, bar after bar, yet never repeat themselves.

Unlike recent Robillard releases, guitar is front-and-center here, with saxophone moved to the side. Still, Robillard is accompanied by a capable crew that includes musicians with whom he has played for years. Standout cuts include “Rhode Island Red Rooster,” an homage to the Chicago blues of Muddy Waters and his ilk, “The High Cost of Lovin’,” co-written with Doc Pomus, “Duke’s Evening Blues” for its spoken-word vocal track, and “Grey Sky Blues,” which captures slow blues that is familiar and fresh with a full horn section backing and those long guitar solos for which Duke is known.

For years, Robillard’s vocals have been down in the mix, but here, it’s out front and delivered with a staccato blast by someone who tells it like it is, lyrically. And with those (mostly Fender) guitars ringing through the set, it’s him doing what he does best.