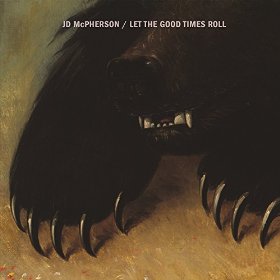 JD McPherson was a middle-school teacher in Broken Arrow, Oklahoma, with a rock and roll band on the side. Then he lost his job and decided to make a record. He cut Signs And Signifiers at the oh-so-cool Hi-Style Studio in Chicago, got picked up nationally by Rounder in 2012, and catapulted to national recognition. The album overflowed with glorious retro R&B and rockabilly, from the vintage-recording vibe through the vintage guitars to the vintage-styled songs.

McPherson and company – including Hi-Style mastermind and upright bass maestro Jimmy Sutton – have toured constantly for the past two years, honing their sound, and their edge. All of which makes the anticipation for this new album that much more keen.

McPherson has his longtime band still behind him: bassist Sutton, drummer Jason Smay, pianoman Ray Jacildo, and Doug Corcoran on sax as well as backup guitar and keyboards. McPherson himself covers songwriting, vocal, and lead-guitar duties.

And again, the music is a melting pot of old and new; McPherson looked to avoid making “a time-machine record,” but with all the elements people love about rock and roll and rhythm and blues.

If anything, the band’s incessant touring has resulted in much more polished playing. The songs and musicianship here are slicker than on the debut, lacking that raw, raucous energy that made the band breathe pure fire. The main producer this time was Mark Neill, who has done sessions with the Black Keys, Old 97s, and Los Straitjackets, but also many a retro rockabilly band.

Any way you cut it, the album’s a must-listen. This is faith-rebuilding rock and roll that you’ll spin again and again.