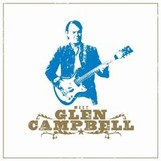 Glen Campbell has been absent from the pop/rock world for a long time. His late-’60s records like “Wichita Lineman,” “By the Time I Get To Phoenix,” and “Gentle on my Mind” showed him to be a singer and guitarist who understood songs and how to get the most out of them.

Here, producer Julian Raymond gets to the heart of songs that would seem an unlikely match. Works by Tom Petty, the Foo Fighters, U2, Green Day, the Replacements, and others get first-class treatment, some with production values mirroring his late-’60s work. Petty’s “Walls” has a beautiful chorus of acoustic guitars, gorgeous string segment, and a twangy Campbell solo to augment his nice vocal. Same goes for an unlikely cover of “Times Like These” by the Foo Fighters, which gets an unexpectedly perfect reworking. That sort of arrangement also fits “All I Want is You,” the U2 classic that Campbell makes his own.

A tip of the cap for arrangements and production – the sound is gorgeous and Campbell’s vocals really shine, cut dry and mixed right out front.
It’s nice to hear a guy whose resumé includes classic records by the Beach Boys, Sinatra, the Righteous Brothers, Elvis, and hundreds more, and who made some of the best pop records of the ’60s sounds so at home.

Kurt Rosenwinkel – The Enemies of Energy