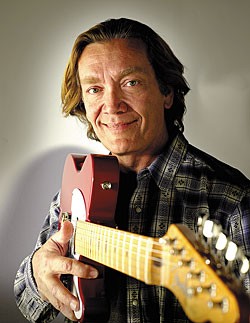 G.E. Smith is a guitarist, vintage-instrument authority, and holder of several past high-profile gig including 10 years as the bandleader on NBC’s “Saturday Night Live,” where he proudly displayed pieces from his vintage collection while laying down nasty licks with some of the coolest tone ever parlayed. Prior to that gig, he spent six years with Hall & Oats (appearing in several of the most-played videos of the early 1980s), and the early ’90s as guitarist and bandleader for rock icon Bob Dylan.

A vintage Fender aficionado – especially with early-’50s Telecasters and early Fender lap steels – he recently teamed up with Fender to design a unique signature instrument.

Vintage aficionados will recognize a nod to the earliest Telecasters in the form of a neck has a girthy early-’50s feel with what Fender describes as a “deep U” shape. The body is finished in classic Dakota Red, with a white pickguard (mid-’50s-style Honey Blond with a black single-ply ‘guard is an option). Both body and neck are finished using nitrocellulose lacquer. The features that most differentiate it from a standard Tele have to be its ’40s lap steel style fretboard inlays and modified Tele bridge mounted directly to the body. Fit and finish are impeccable, with perfect setup, a tight neck joint, and not an imperfection to be found in body, neck, or hardware. And where the typical artist signature is silkscreened on the headstock, here Smith’s name is engraved in the neckplate – big kudos to both G.E. and Fender for preserving the classic appearance of the Tele headstock.

For years, certain Tele players have modified their guitars by removing the bridge pickup from its bridgeplate mount and using long wood screws to affix it directly to the body. This enables the Tele to be played at high volume without feeding back. In the case of the Smith Tele, it was inspired by G.E’s love of a 1948 lap steel in his collection with a similar pickup. It sounds fatter than his Tele, perhaps because the lap steel’s bobbin was mounted directly to the wood. Fender then went one step further by shortening the standard “ashtray” bridge.

If you believe that neck size has a marked effect on a guitar’s tone, the Smith Tele may be worth a look, as Fender has installed one of the fattest necks to be used on a Tele – vintage or not – in quite a long time. And the fretboard is fitted with vintage-size fret wire.

Through a Divided by 13 FTR 37, a Dr. Z Carmen Ghia, and a Victoria Regal, the guitar performed exceedingly well. Pickup output was balanced in all positions, and the bridge pickup is a wonderful new experience, sounding like a ’50s-style Tele, but there was increased low-end and upper-midrange response, what some like to call “thonk.” The guitar did not have the liveliness one associates with a spring-mounted bridge pickup, but it also means the amp can handle pedal distortion at higher levels than a standard Tele could. It is a trade-off, but one that many of us would take, no qualms about it. Even doing chicken picking, the guitar just had a very welcome level of thickness to every note. The neck pickup was clear, without a trace of muddiness. We also found it quite easy to get a fat tone on the bridge setting, yet flip to the neck setting and not feel the need to re-EQ the amp. This is a rare feature in any Telecaster.

The G.E. Smith Telecaster is a great all-around guitar. From R&B to chicken picking, to all-out rock, it delivers. For the working guitarist, the guitar’s unique bridge pickup mounting allows use with high-gain amps and pedals that would make most other Teles feedback uncontrollably. To collectors it’s not only a signature model of a well-known Tele connoisseur, but a tasty mix of Fender features from long ago.

The G.E. Tele might not be for fans of Pete Anderson or Don Rich, looking for maximum brightness and twang, but if you love a Tele and are looking for less twangy bite with juicier filling, it just might be for you.

What was the inspiration behind the unique features of your signature Telecaster?
I think a lot of it was playing my ’48 Fender lap steel. I was looking at it one day, and I could just see how Leo could have looked at that, and birthed the Telecaster from it. The pickup, knobs, and finish in many ways make it look like a little Tele. That’s where it all started. Playing the ’48 and just digging its sound – very fat.

Where did you get the idea of mounting the bridge pickup directly to the body?
Well, it’s not a new thing. Roy Buchanan experimented using lap steel pickups and mounting pickups to the body as far back as the ’60s. I’d done it myself, years back. Those old lap steels had a pickup that had a bigger coil on them.

How about the fingerboard inlays?
That was just something cool I thought of to take the lap steel thing a bit further.

Was the neck shape based on one of your vintage Teles?
It was actually based on two of them – a ’52 and a ’53. And one of the main things I wanted was a neck that did not get thinner as you moved toward the nut. So the thickness – not the width of the neck – does not change along the length of the neck. All the Teles I really like have had fat necks.

What about the use of all flathead screws?
That was just a fun little touch.

And the color choices?
Well, we did kind of an early-’50s blond with a black guard. Funny thing, the first 50 or so have kind of a little more orange to the color.

What about the red with the white pickguard.
I don’t know if it was Cimarron Red or what I was thinking. We went back and forth with samples until I told them to think of the red lipstick my mother wore when I was a kid. Then it was perfect. The production model leans a little more toward Dakota Red.

It has a James Burton vibe.
That’s what I was going for – he refinished his ’53 to that color. I just know that Fender had to have done some red Telecasters pre-’54.

Was it your idea to put your signature on the neck plate?
Yes, it was. I am such a vintage nut that I just couldn’t spoil the look of the Telecaster headstock. Fender was kind enough to do it even though it costs them an extra buck or two.

Who did you work with at Fender?
Mike Eldred, Richard McDonald, Justin Norvell, and Richie Fliegler among others. And it was such an honor to get to be a part of.