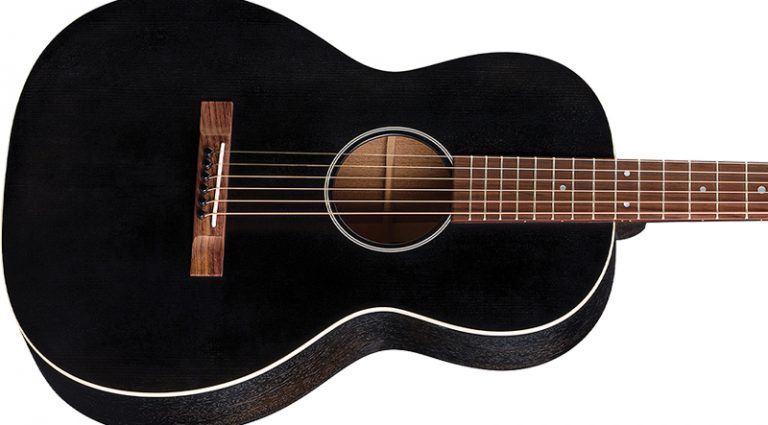 When C.F. Martin Guitars endured the deprivations of the Depression and World War II, they still found ways to build first-class guitars – just without the trademark frills of herringbone, shell purfling, and inlays. Buyers in the market for highly decorated Martins were rare. Nonetheless, Martin produced many fine, more affordable guitars.

In the spirit of those now-coveted ’30s and ’40s models, Martin offers the 00-17S in two finishes – Whiskey Sunset and Black Smoke, as tested here.

The Black Smoke’s nearly opaque finish shows plenty of wood grain on the mahogany back, sides, and “select hardwood” two-piece neck, glued together down the middle. Back and sides, along with the Sitka top, are all visibly even grained and bookmatched. After checking out the ivoroid binding (top only), the 1955 Style 18 MOP fingerboard inlays, and the raised Script Authentic 1933 logo on the ebony overlay, the next impression is that the 00-17S is preternaturally light.

A look inside confirms that, while the legendary Martin craftsmanship is typically pristine, the ¼" braces and lack of side reinforcements conspire with the narrow body, 12-fret neck, and straightline bridge to produce a featherweight instrument. The thin satin finish with unfilled pores adds further minimalism to the 00-17S, along with the lack of decorative purfling, endpin cap, and neck binding. But lest one think that this “isn’t really a Martin,” the familiar features found in a vintage box of this size are here: dovetail neck joint; scalloped, quartersawn braces; historic Martin X-brace; rosewood fingerboard and bridge; bone nut; and saddle topped with Golden Age relic nickel tuners.

Where some manufacturers load their vintage-inspired models with massive V necks, Martin opts for a modern taper and “modified low oval” profile, coupled with a 24.9″ scale and 1¾" nut. Strung with Martin Retro Lights, the 00-17S shares at least one major feature with its fancier mates in that it has been Plek’d. Imagine the expression on an old-school Nazareth setup master’s face if he got a look at that computerized machine process!

The result? An accessible axe that’s remarkably friendly to play. Bare fingerstyle techniques and percussive string snapping and slapping are enhanced by the wide string spacing and short-scale string flexibility. The neck and fingerboard are fast and easy-playing in all positions, and the entire 12-fret fingerboard is tunefully negotiable. The fingerboard edges feel like they’ve been rounded by decades of playing.

The scale length is sufficient to support double drop-D and open-D tuning without excessive string noise or intonation issues. Individual string amplitude over the business section of the neck is consistently balanced, and chords voiced with unfretted strings have a lengthy, satisfying decay. The short scale makes barre chords easy to play, though the guitar’s real sonic strengths are heard with open strings ringing.

With a stout Golden Gate plectrum, the 00-17S handled forcefully picked bass lines, blues licks, and chord accompaniment à la Lonnie Johnson with an even, airy sound. The ease of playing made venturing into Eddie Lang territory a natural progression. The 00-17S might not be an effective bluegrass “cannon,” but Martin has another design for that.

C.F. Martin Guitars have made a modern, more affordable interpretation of a Depression-era model that never existed in quite this form. The balanced, transparent sound, and lack of overtone woofiness look to be good news for the recordist as well as the amplified performer. The absolute charm of the 00-17S makes it a great soloist and songwriter guitar: there’s a deep spirit from which to draw inspiration down in those timbers.