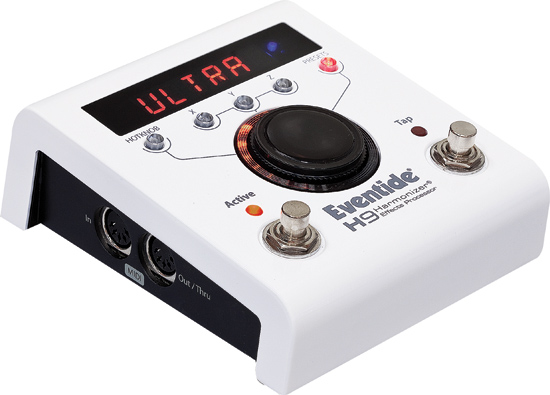 Stompbox evolution is getting to the point where huge libraries of sound are coming out of single pedals. You might say, “Well, those are just regular ol’ multi-effects pedals – big deal!” That’s partially true, but the latest twist is that now there are “studio-grade” effects that fit neatly on a pedalboard. Take the Eventide H9, for example – for a few hundred bucks, you can add a monster effects rack to your board (or your home studio) for a fraction of the price that the individual rack or pedal effects would cost. What’s more, they’re the famous Eventide studio sounds – the legendary echoes and delays, choruses, tremolo, and, of course, the famous Harmonizer effect, all derived from Eventide’s Factor series (Time Factor, Pitch Factor, Mod Factor, and Space).

The H9 looks a little different from normal pedals in that it has a big control knob in the middle of the unit, along with two footswitches and a handful of buttons that provide the interface. The connectivity – i.e., the part that excites studio geeks – is quite impressive. The H9 sports a pair each of mono ins and outs, as well as a ¼” jack for an expression pedal, a MIDI in/out, and USB connectivity to control the effects with a PC or Apple computer. But get this – there’s also Bluetooth, allowing the user to control the sounds on the H9 wirelessly via iPad, iPhone, or iPod (using a downloadable app).

For the gigging guitarist, the thrill is connecting the H9 into a computer, tablet, or phone at home, adjusting the sounds to taste, and then saving them back to the pedal for live dates. Sounds complicated if you’ve never done it before, but trust me, it ain’t. If Hendrix were alive today, he’d toss his Fuzz Face and Octavia out the window and dive into this hip technology headfirst. Think of it as having Eddie Kramer right on your pedalboard.

What does the Eventide H9 sound like? A player can easily nail the chugging, echo-repeated triplets in Pink Floyd’s “Run Like Hell” or the classic echo repeats in U2’s “Where the Streets Have No Name.” Rockabilly slap-back echo and that modulated ping in Van Halen’s “Panama” are a piece of cake. Or look for dreamy, ethereal Bill Frissell-type sounds or effects that sound like a distant string section, complete with slow swells. These sounds can really be exploited with a stereo rig (or a pair of tracks when recording), which makes the H9 effects even fatter and lusher, with all kinds of swooshing, swelling sounds that art-rock masters like Bill Nelson and Adrian Belew would go crazy over. Naturally, adding a fuzz, distortion, or overdrive in front of the H9 can send one off into the stratosphere, with sounds from Hendrix to Fripp to Vai and beyond. Dig deep into the H9, adjusting parameters until you’re blue in the face, or just have fun with its 99 presets.

Those who’ve never worked with a pedal like this should think of it as a brain that’s full of millions of adjustable sounds, which is why controlling it with a computer, tablet, or other digital device makes it so simple – the “editor” programs and apps feature easy interfaces that anyone can explore. Moreover, when Eventide comes up with a new sound, it can be purchased and downloaded via the Apple iTunes store. One certainly doesn’t need an external device to manipulate sounds in the pedal – that can be done with the H9’s controls. But again, an external device will allow the user to tweak at home, load new sounds, and then bring it to the gig. No one in the crowd will know where those amazing, otherworldly sounds are coming from; other guitarists will definitely be jealous!

In all, the Eventide H9 is an exciting, powerful pedal that is pushing the idea of the “stompbox” into new territory. Is it just a foot pedal or a complete, mini-sized effects rack? The answer to both is yes. If you’re beginning to salivate, go watch some videos online and see how cool this pedal sounds. It’s hard not to be impressed.