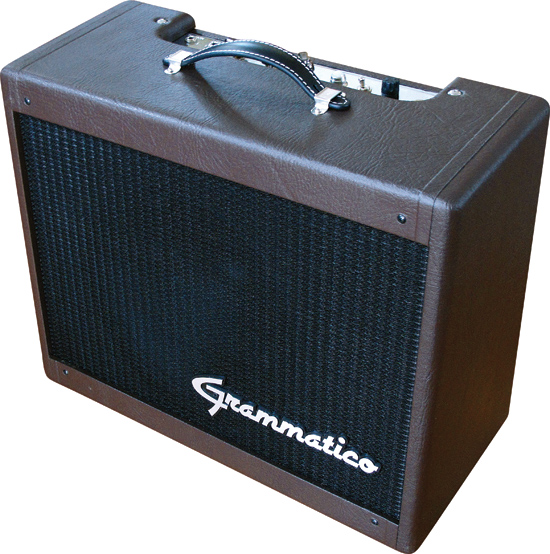 Stop the presses! John Grammatico has added a second amp to his line.

Of course, this wouldn’t be headline news with most amp-makers, who boast dizzying lines of models and variations with added doohickeys and miscellaneous whatnot. But, Mr. Grammatico has chosen to get it right – really right – with a small, pure offering. The arrival of his second model, the LaGrange, is indeed noteworthy.

The Texas-based boutique builder’s mission is to create modern versions of great vintage amps, using reliable and tighter-tolerance components. His first amp, the Kingsville, was inspired by the ’59 tweed 5F6-A Bassman. Legend has it that Jimmie Vaughan pulled out his checkbook after picking just a couple riffs through a test model.

The maestro’s new LaGrange is based on the tweed 5E3 Deluxe. Grammatico says he aimed to capture the tones of early ZZ Top, Neil Young, Keith Richards, George Thorogood, Kenny Burrell, and T-Bone Walker, but his goal was to get those sounds with a guitar plugged straight into the amp

In other words, shelve your Fuzz Face. Let your Tube Screamer gather dust. The LaGrange is designed to do it all, au naturel.

The amp’s specs are pure simplicity. It pumps out 15 watts through two 6V6 power tubes and two 12AX7 preamp tubes plus a single 5Y3 rectifier. The sound comes via a single Jensen P12Q 12-incher in a cabinet that mimics the dimensions of a tweed Deluxe, all in a handy 23-pound package.

The controls are similarly straightforward. As Grammatico aficionado Redd Volkaert explains, “It’s got a Tone knob and two Volumes and two channels, a switch and a fuse, and a real nice light.” What more do you need to play Texas blues or classic rock and roll?

The LaGrange’s fit and finish are sublime, but there’s more to it than just a pretty face. It’s hand-wired and beauteous to the core. There’s something jaw-dropping about the exquisite soldering, crisp wire routing, and all-around electronics artistry that guitar fans never seem to get over.

But the truth is in the tone, of course, so we tried out a LaGrange with a ’56 Strat, a Gretsch 6120 ’55 reissue with single-coil DynaSonics, and a ’90s Les Paul Classic with humbuckers. We also compared it alongside an original 5E3 Deluxe.

With the Volume set low, the LaGrange offers extremely sweet pop and articulation – its tube tone simply blooms. Think T-Bone Walker with woody, warm, and fat mids. Yes, you read right – it can make a Strat sound like a big old archtop.

Turn the Volume up to 6 and that promised distortion starts kicking in. And that’s just at the midpoint. A slight turn to the right and the LaGrange overdrives the sound until it gets lowdown and grungy. With the Les Paul’s higher-gain pickups, the volume and dirt are everything you’d want to impress a small club. And as with the original 5E3, the Volume knob goes to 12. Eat your heart out, Mr. Tufnel.

The Normal channel was a bit subdued, but ditto the vintage Deluxe. Plug into the Bright side, though, and the tone rings. Dial it in to be raw and biting, or get just an edge of grind while retaining rich harmonics. Amazingly, it keeps the articulation of a single note or a full power chord even when fully saturated.

The LaGrange is a glorious amp for classic country, rockabilly, rock and roll, and blues of all flavors, from Mississippi and Texas north to Chicago. And, yes, you can leave your Fuzz-Tone at home for paperweight duty. Clean or cranked, the Grammatico LaGrange is simply great fun to play. And that makes you want to play it more and play it harder. Which in turn drives inspiration – which is what a good amp’s for, right?