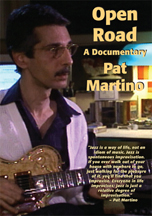 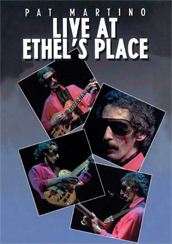 The re-release of these films on DVD gives jazz guitar fans a glimpse at one of the all-time greats. Pat Martino’s story is known well: surgery for a brain aneurysm in 1980 left him with no memory – and no ability to play guitar. The documentary lets folks in on the struggles he and his family endured when his health sidetracked his career.

We hear from Pat and others, especially his dad, how he was able to recover his guitar playing. The film also has glowing tributes from the likes of George Benson, the late, great Emily Remler, Les Paul, John Abercrombie, and more.

The extras include a lesson with Martino that could literally take a year to study and you’d still have more to discover. While his playing is great, it’s almost as much fun to hear him talk about music as an extension of life as it is to hear his playing.

The concert film features footage from 1987 with Martino, drummer Joey Baron, and bassist Harvie Swartz having a blast playing and flying through half a dozen numbers.