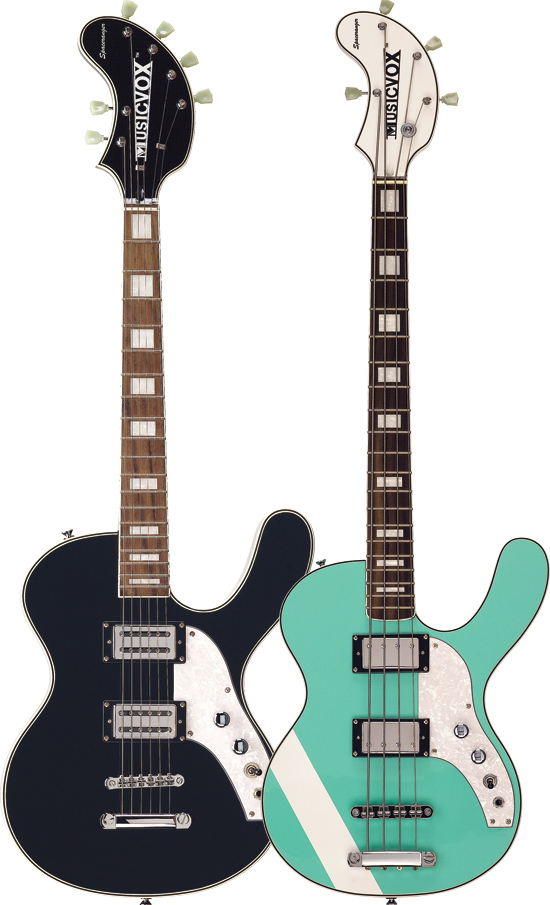 Popularized in film and television, Musicvox Spacerangers have drawn attention for their mondo lower horn and freakishly huge headstock. Purists turn up their noses, but countless others dig the Euro-cheapo aesthetic. Users have included country star Keith Urban, of all people, and the late jam-band bass hero Allen Woody.

The Spaceranger Guitar is a straight-ahead rock and roll axe with a triple-bound mahogany body and 243/4″-scale bound maple neck, 19-fret rosewood fingerboard with block pearloid inlays, humbuckers (in Gretsch-style housings), tune-o-matic tailpiece, three-way toggle, master volume and tone, and vintage Kluson-style tuners on that gi-normous headstock. Incidentally, the thought of tuning a Spaceranger with those pegs located on the butt-end of the headstock might cause some to scratch their heads, but it’s not as strange as it might seem. There’s considerable space between each tuner, making them easy to grab, and with the shorter Les Paul-like scale, they’re also easy to reach. It may take a few seconds to get oriented to the new layout, but after that, it’s as easy as pie. The only debit to the large headstock is a bit of neck-dive, but that can be remedied with a non-skid guitar strap.

Plugged in, the Spaceranger is an animal. It feels great in the hand – the neck and fingerboard are set up well with a low action and a thin profile as befitting the Spaceranger’s Asian origins. The bridge humbucker delivered plenty of heavy rock flashes, while the neck pickup was good for bluesier stuff. Even with the humbuckers, there’s a nice dash of Strat or P-90 quack in the middle position with both pickups on. This is very useful on a lot of ’60s cover tunes. The three-way toggle worked fine, though it was stuck a bit too snugly between the tone knob and cable jack.

The Bass HT takes the Spaceranger design to new stratospheres of retro cool. With a 30″ neck scale, the Bass HT is a very likeable instrument for the bassist looking for something different. In addition to a bevy of finishes, this four-string has a fully adjustable bass tune-o-matic bridge, vintage tuners, 20-fret rosewood fingerboard, bass humbuckers, block pearloid inlays, master volume and tone, and a three-position pickup switch.

Like its guitar battery mate, the Bass HT is a rockin’ electric, and it provides the kind of fun for which short-scale basses are famous. Both the bridge and neck humbuckers deliver big sound whether clean or with a little dirt dialed in. The middle position, however, sounds better on clean settings; otherwise, things can get a little muddy. For more Fender-y sounds, use the neck ’bucker and roll down the tone a bit. One thing that jumps out after playing the Bass HT for a while is that the short scale and fast set up are great for players more used to a guitar-scaled neck than, say, a long-scale Fender Precision. Similarly, it sounds good with both fingers and a pick, which is a more authentic form of ’60s bass-playing (playing electric bass with fingers didn’t become the norm until the ’70s).

In all, both the Spaceranger Guitar and Bass HT performed great, not to mention those knockout looks. Granted, the design is not for everyone, but if you like that campy retro vibe, the Spaceranger shape is a flat-out classic.