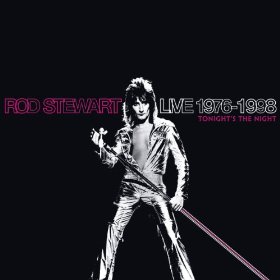 During the span covered by these four CDs, Stewart charted 41 singles – 14 of them in the Top 10 – and he had earlier hits like “Maggie May” and “You Wear It Well” to weave into his high-wattage concerts. He always employed first-rate sidemen and paid them well, but for all their talent, with maybe a couple of exceptions, Rod’s guitarists might as well be in the witness protection plan. In fact, the rhythm section of drummer Carmine Appice and bassist Phil Chen became better known than Jim Cregan, Gary Grainger, Billy Peek, Robin LeMesurier, Wally Stocker, Todd Sharp, Jeff Golub, Oliver Leiber, and John Shanks.

Five hours of previously unreleased Stewart at the peak of his powers and pre-“Songbook” popularity; what’s not to recommend?